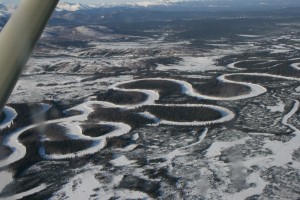 This link, http://www.utexas.edu/cofa/dbi/content/trials-running-iditarod, is a drama lesson providing students the opportunity to explore the trials of the Iditarod Trail Sled Dog Race. Developed by a teacher in Galena, Alaska, this lesson is shared by the University of Texas at Austin and its Drama Based Instruction program. http://www.utexas.edu/cofa/dbi/  Teachers use the strategies narrative pantomime and exploding atom in this lesson as students apply role work, image work, and writing in role.

Another way to act out a team of dogs in the Iditarod is to have students mimic a dog team, organizing themselves according to the dogs’ positions on a team and then responding to the musher’s commands.

Dog team positions include lead dogs who are at the front and are very good at following directions/commands. Swing dogs are  immediately behind the lead dogs and help set the pace and “swing” the team around curves or corners. Team dogs are next in the line-up and provide power, and, last, the wheel dogs who are immediately in front of the sled. Sleds don’t have wheels, but the term wheel dog comes from the days of horses pulling wagons or stagecoaches. The horses just in front of the wheels of the vehicle, were in the wheel position, their job being to help turn the heavy load and stabilize it.

This exercise will require teamwork, too. Students will have to run at comparable speeds in order to leave no one (no dog) behind! Sled dogs respond to voice commands, not reins or whips, so the musher needs to learn “gee” (pronounced jee) to tell the team to turn right; “haw” to turn left; “easy” to slow down; “whoa” to stop; and, the most favorite of the dogs’ commands, “Hike!” to start running. Hike is the command most mushers use to tell their team to go rather than saying “Mush!”.