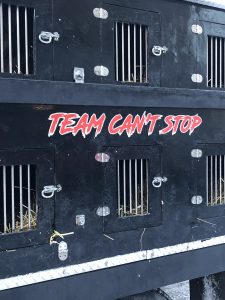 With the way school is working while we gear up for the 2021 Iditarod Race, many of the tried and true staples of our Iditarod curriculums aren’t going to work the way they always have. In some ways, this will help push us to find new and possibly better ways to do things.

For years, I have had my students pick a musher to follow the same way. We start by doing a fantasy draft for a dog team.  We then do a study of the probability of a musher matching a certain profile winning the race. For example, is it more likely that a male, veteran, from Alaska or a female, rookie, from the Lower 48 will win the race. Then, during our “Musher Banquet,” the students reach into the mukluk, pull out a profile, and choose a musher to follow based on that profile. You can see my old standby lesson plans for both of these  HERE. I’ve included an updated version of the Dog Draft for this year at that link.

I’ve liked this combination of dog draft and musher pick for two main reasons: it gave the kids more than one team to follow in the race and if their musher scratched all wasn’t lost!

With the changes in schooling this year, however, my musher picking ceremony is going to have to change since we won’t be all together in person and we can’t be close enough to reach into the mukluk!  And so this year, inspired by both fantasy mushing and the NFL Draft we’re going to change things up a bit.

Via Zoom, although it would work in person equally as well, we are going to have our Fantasy Iditarod Draft! The students will have their recording sheets (included below). In true NFL Draft fashion, I will announce, “The Fantasy Draft participants are now on the clock. You have five minutes to choose a male, veteran, from Alaska for your team. Your time starts now!” The students will then use the Iditarod site or the Iditarod app to choose their musher and record him on their sheet. I’ll then repeat the process with four other profiles to tie it into our probability work. I’m planning to use:

I’m hoping that this rendition of choosing mushers will give my kids even more mushers to watch closely during the race, help alleviate some sadness when mushers scratch, and add a little excitement to our virtual musher banquet.

And, if you haven’t discovered it yet, THIS is the perfect time for this! Yes, that is a SLED DOG RACE timer! Special thanks to Jenn Powell, second grade teacher at my school for finding that little gem!

Here is the tracking sheet I’m planning to use this year. With five mushers to track, I think the traditional musher tracking form may be too much to handle, so I simplified it to just note which place the mushers are in each morning and whether or not they have taken their mandatory stops. EDU Iditarod Musher Tracking Sheet