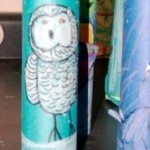 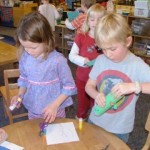 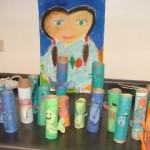 By Laurie Nakauchi-Hawn, Finalist for Target® 2009 Iditarod Teacher on the TrailTM

With the Iditarod coming up, my first grade class has been studying the people and animals of the arctic. As a way for students to learn more about arctic animals and the Athabaskans, we made totem poles.

First, to introduce the animals of the arctic, we read Animals of the Tundra by Richard Vaughan. The children were fascinated by the variety of arctic animals. We discussed the adaptations that enable these animals to live in the icy arctic. Once the students were familiar with the animals, I brought in photos of totem poles and we talked about the significance of the totems and     animals represented on them.  We also talked about why Inuits would not make totems like the Northwest Coast Indians.

The children were excited to create their own totems. Using wrapping paper tubes, construction paper, crayons, scissors and glue; each child made a totem pole with the image of an arctic animal.

As a follow-up activity each child will identify the specific adaptations of the animal(s) on the totem.