Weather or Not, The Race Must Go On!

Posted by Diane Johnson in Topics of Interest for Discussion or Research
Date: September 5, 2012 9:40 pm

By Linda Kal Sander, Finalist, 2010 Target® Teacher on the Trail™ 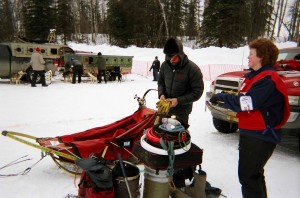 In Hollywood and Broadway the show must go on. The same is true for Iditarod.  True, weather conditions might not always be ideal, but the race has started for 37 consecutive years, no matter the weather conditions.

The three main weather factors mushers must consider when running Iditarod are temperature, wind, and snow conditions.  They think about the variety of conditions they might face well in advance of the race by determining what needs to go into a drop bag for each individual checkpoint. Extra plastic runners and a dry pair of socks might really come in handy after a trip across the Farewell Burn when they arrive in Nikolai.

For those who live outside Alaska, the first question that comes to mind is, “How cold is it in Alaska during the Iditarod?” The average temperature in Anchorage during March is 25 degrees Fahrenheit. To a human this is cold; to a sled dog with a double insulated coat of fur, it is warm.  Dogs heat up pretty quickly while running in these temperatures.  However, when the temperature decreases in the interior or along the treacherous Bering Sea, the below zero temperatures mean it is time to cover the dogs.  Many dogs will run with a jacket on.  Most dogs run with booties on their feet.  These serve as both insulation and protection against wear. Mushers don special outdoor gear and cover all exposed skin in extreme sub-zero temperatures.

A fun activity to try with your class is a comparison of the temperatures in your town with the temperatures of Anchorage and Nome.  During the race, visit http://www.weather.com and have your students look up the temperature for their city, Anchorage, and Nome and mark them on a chart.  If your students start on Monday after the Official Start and end when the musher they are following finishes in Nome, they should have at least nine days of comparable data.  Infuse technology by placing these temperatures onto a spreadsheet and turn it into a line or bar chart.

Wind is a big factor on many parts of the trail.  Blizzards can pop up quickly and unexpectedly for mushers on the trail, especially when they get close to the sea along the Bering Coast in Unalakleet or above the Norton Sound in Koyuk.  In fact, the wind blows so strongly on the coast that some villages, like Shaktoolik, have actually moved!  Mushers know that strong winds are to be expected in places like this and have to prepare their teams by training them in similar conditions. 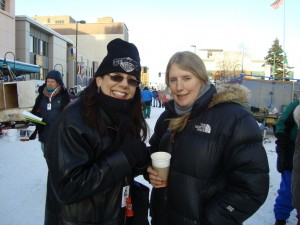 In fact, one storm was quite memorable to Iditarod’s first female champion, Libby Riddles. A deadly blizzard popped up in the Norton Sound during the 1985 race.  Libby led her team out into the storm, and slowly and methodically braved the Arctic elements to come in first place.  I ran into Libby at the Ceremonial Start for the 2009 Iditarod and asked her how she managed to motivate her team to get up and move during this tempest.

“You have to make it a point as a musher to train in all types of weather, especially in storms.  I took my team up to Bering Coast several times for long runs because I knew it was what we had to do.  Iditarod is a race.  You have to be prepared for whatever Mother Nature throws at you if you want to win.”

There are several lessons you may want to try with your students to teach wind.  One idea for pre-school and kindergarten students would be to have fun with bubbles.  Let your students blow bubbles outside if there is a slight breeze and determine the direction of the bubbles, as well as the relative speed of the bubbles based on the wind.  Did the bubbles float away slowly or quickly?  You can compare the speed by blowing bubbles both indoors and out!
Elementary students can complete a Venn diagram to compare and contrast hurricanes and blizzards.

For the secondary student it may be a good time to introduce concepts of wind chill, hypothermia, or the Coriolis Effect.  Iditarod.com is a great place to start for the first two.  2006 Target® Teacher on the Trail, Terrie Hanke has a couple great lessons you might want try with your students at this link.

Here is a website that offers a student friendly explanation of the Coriolis Effect.

Snow conditions are also a factor for mushers.  Luckily, there is plenty of snow for this year’s Iditarod. Regardless of the weather or trail conditions, the race always goes on. In 2003 when trail conditions were so bad due to an unseasonably warm winter, the race start was simply moved to Fairbanks – a first in the history of the race.  When considering trail conditions, the mushers have to think how their sleds are going to pull against the snow.  This is why you will see mushers pack different types of plastics, graphite, and Teflon® to use on their runners.  Take a look at the items Lance Mackey packed in his sled at the Willow restart.  Do you see the three different color coils of plastic runners?

Upper level students may be interested in the coefficient of friction created with the different runners used on a sled by conducting an experiment on the pulling power of different plastics using a spring scale.  This is a great activity for a teacher with knowledge of Physics or for any student with hopes of running the Jr. Iditarod.  In fact, Iditarod Education Director Diane Johnson’s 7th grade son titled his science fair project  “Whatever Pulls My Sled.”

For more information on the coefficient of friction click here.

Snow conditions are important to mushers and in the lives of the Inupiat of Northern Alaska.  These indigenous people have at least eleven words for snow.

qimaugruk: snow drift blocking a trail or a building

It matters not if the wind is howling across Koyuk or ten inches of nutagak now blanket the Happy Steps. Iditarod is indomitable.  The race must go on.  Now you know why it is the Last Great Race on Earth!