The History of the Iditarod Trail Sled Dog Race

Posted by Martha Dobson in Teach & Learn, Tips and Tools, Topics of Interest for Discussion or Research 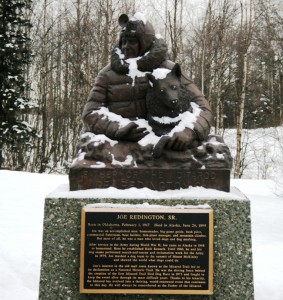 Joe Redington and his dog, Feets

The History of the Iditarod Trail Sled Dog Race®

Since 1973, mushers have challenged themselves in a race nicknamed The Last Great Race on Earth®, racing each March from Anchorage to Nome, Alaska. Nearly a thousand miles in length, mushers and teams travel over mountain ranges, through monotonous, flat tundra, to the western Alaskan coast and finally to the town of Nome, established when gold was discovered there in 1898. By 1899, Nome’s population numbered 10,000.

The route that most of the race follows is a trail that was created long before the race became a race. Used by Native Alaskans for hunting and travel to various villages, the Iditarod Trail was cleared in 1908 by government employees, but it wasn’t until the 1910 gold discoveries in Iditarod which is a ghost town now, Ruby, Ophir, Flat, Nome, Elim, and other villages, that it became regularly used as a means of supplying miners and settlements with mail and supplies, delivered by dog team. It also provided the route for gold to be sent out of Alaska when the Bering Sea was frozen, preventing ships from reaching Nome for months at a time. Dog sled teams carried gold to the ice-free bay at Seward to be loaded on ships there.

Before the time of airplanes delivering mail and supplies to remote Alaskan areas, dog teams did the job. Alaskan Natives had been using dog teams in their way of life, a subsistence lifestyle which depended upon hunting, fishing, and gathering to provide food. Dog teams helped them travel, carry game they hunted, and carry food and water. People who lived in and who explored Alaska used dog teams to survive and explore.

By 1973, dog teams in the small Alaskan Native villages were becoming replaced by snowmachines nicknamed iron dogs. Joe Redington, Sr lived in Alaska and spent much time using dog teams himself in his work, and thought it important to preserve the culture of sled dogs and their use in Alaska. The snow machines were not reliable and could leave one stranded, whereas dogs were always reliable and could save lives. He also thought it was important for the Iditarod Trail to be recognized as a National Historic Trail. These two factors led Joe to work to establish The Iditarod Trail Sled Dog Race®, contrary to information stating that the Iditarod commemorates the delivery of diphtheria antitoxin to Nome in 1925. That event of 1925 is honored by a different sled dog race, the Serum Run, a race Joe helped establish.

Joe’s perseverance and ability to work with people and get them to volunteer resulted in the first race of 1973, won by Dick Wilmarth in 20 days, 0 hours, 49 minutes and 41 seconds.

The History of the Iditarod Trail Sled Dog Race (PDF)