2011 Teacher on the Trail Martha Dobson’s Most Memorable Moments 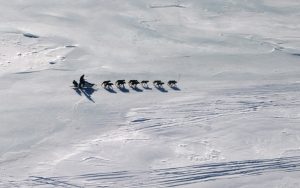 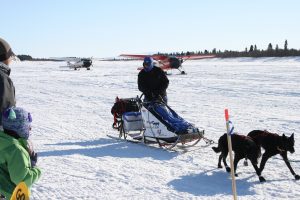 White Mountain, 2011, and John Baker arrived first. By happenstance, I was there and witnessed it, and the moving pride the Alaska Natives expressed.

Earlier that day, I was in Koyuk, my favorite checkpoint of the race I experienced. There, I worked as a volunteer stacking boxes of HEET in the Dodge Lodge tent, washed dishes after a spaghetti and moose meat sauce dinner, and took messages to the school for the Insider crew.

Now it was time to leave, and I had a choice. Fly to Elim and stay or to White Mountain?

We flew over John Baker running in on the river, landing just before his arrival.

As the frontrunner, a crowd gathered to meet him.

But, this was special, different.

Their pride was palpable, moving me to a few quiet tears. Even now, writing this, tears appear.

This Inupiaq musher, this race, bringing it back to where driving dogs started. With the Alaska Native people, the indigenous people of Alaska, living their lifestyle with dogs.

ESPN reported that 48-year-old Inupiat John Baker’s won in the Iditarod Trail Sled Dog Race, the longest sled dog race in the world. Baker become only the second Alaska Native to win the race and the first ever Inupiat since the 1,150-mile Anchorage-to-Nome race began in 1973. As Baker crossed the finish line on Tuesday morning, he was greeted by hundreds of fans and traditional Alaska Native drummers greeted the musher. Baker hails from Kotzebue, Alaska.