Communication–How It Happens on the Trail 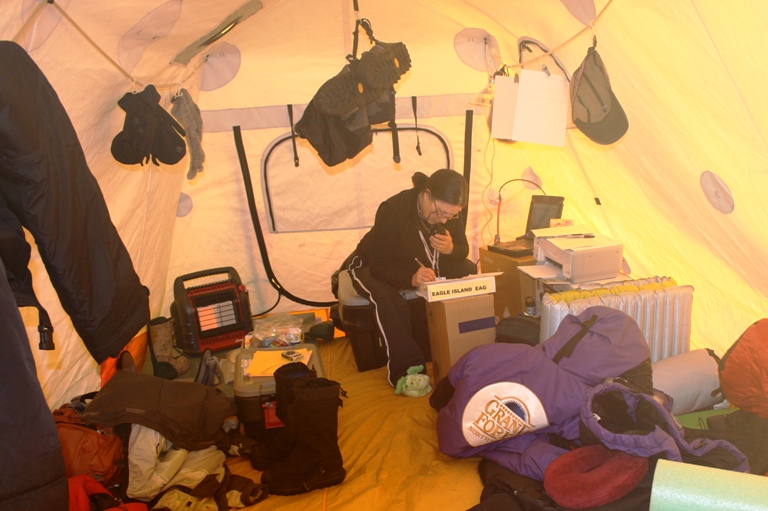 Comms volunteer, Nancy, uses a walkie talkie to receive and confirm information from the race checker upon a team's arrival in Eagle Island.

How many forms of communication did you use today? Generate a list. Were all of the forms on your list electronic, or did you include forms like sign language, writing, or speaking? Make a chronological list or timeline of the development of all the forms of communciation you used in one day.

Now, think about how quickly or slowly these forms of communication worked. Did you have to repeat any of them in order for the person receiving them to get the communication?

During the Iditarod, a group of volunteers works a job called Comms, for Communications. Comms volunteers work at every checkpoint and send information such as musher arrival or departure dates and times and the number of dogs they arrive or leave with to the Comms department in Anchorage. This process is how the race standings are updated by the Anchorage Comms volunteers. Comms also communicates messages from people at the checkpoints to others elsewhere.

In Alaska, Comms is challenging. The Iditarod runs through remote Alaska, and after leaving Willow at the start, the race is off the road system, as they say in Alaska. That means there is no road connecting the villages and checkpoints; flying, snowmachine, or dogteam are the only ways to reach them.

The remoteness affects communciations–race checkers and checkpoint Comms volunteers may use walkie talkies to communicate arrival and departure information to each other. Using cell phones to transmit race details to Anchorage Comms is not reliable because there isn’t cell service in all areas; Internet service may be available via ethernet cable connection or wireless, but usually it isn’t wireless.  Sometimes the Internet is only accessible by satellite, and sometimes a sat phone (satellite phone) is all there is to use, like in Iditarod checkpoint. In Eagle Island, information is sent by data sat–that means a satellite phone is attached to the laptop and an antenna outside the Comms tent gets satellite signal to transmit the communication. In a day and age when people are accustomed to almost instantaneous communication, this could seem to be a delayed process.

And, all of us who use email or text messaging have experienced sending a message which disappears into who knows where, and the intended recipient doesn’t receive it.

My phone was off and packed after Skwentna because it didn’t get service; no phone for me for about 3 weeks. I used ethernet cable and wireless at other places, and in a couple of places, there was no Internet for me to use because it was more important for Comms to access it than me. And, I got down to basic communication as well, just asking and talking, instead of calling or emailing.

In the photograph, notice the heater and laptop in the tent. Clothing is hanging in order to dry–wearing sweat-soaked clothes in cold weather chills the body, something to be avoided. Find out why this should be avoided and explain it to someone else.