A View From Behind 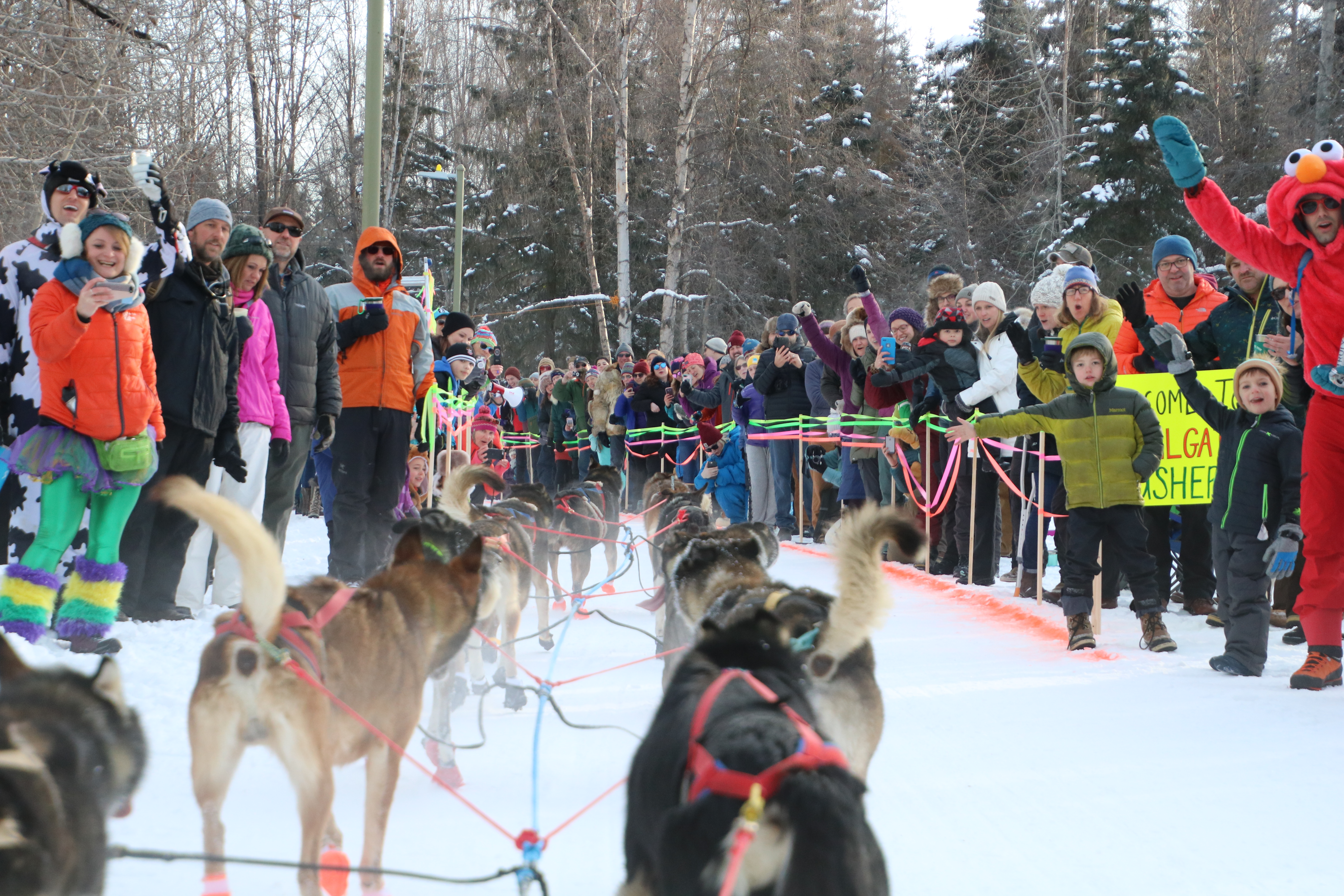 Every year, lucky Iditarod fans have the opportunity to be an IditaRider during the ceremonial start of the race. Essentially, IditaRiders are people who get to ride in the sled of one of the Iditarod mushers. I was incredibly fortunate to ride in the sled of Ramey Smyth, who’s wearing bib #6 during this year’s race. Having witnessed the ceremonial start before, I knew about the lighthearted and fun environment that fans experience while being in the downtown Anchorage area; however, today’s ride opened my eyes to an entirely knew perspective and understanding about the ceremonial start. 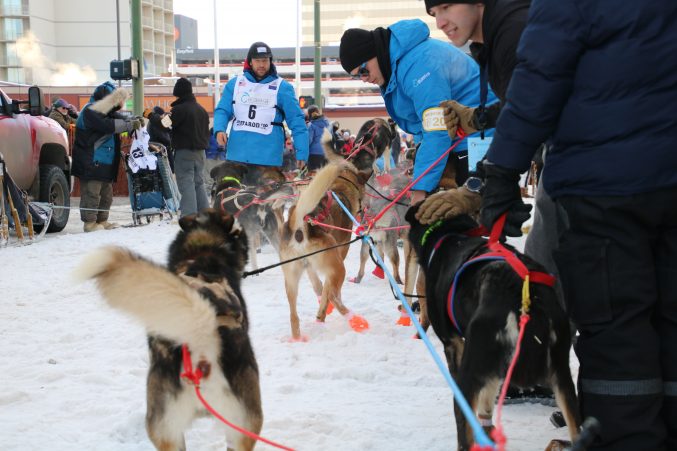 Before leaving for the starting line and before any of the dogs were placed in their harness, I was instructed to take my seat in the sled. For a 6’4” tall man, I have to say that I was surprised about the amount of room that I had in the sled bag. Ramey’s team was excited and eager to run! I was able to closely watch the team as they were put in their positions. After each dog was harnessed, he/she would pull with a tremendous amount of power that would jerk and shift the sled. The loud barks were electrifying as they filled the air and bounced off of the tall buildings. Some dogs would jump high off the the ground just waiting for the opportunity to run. 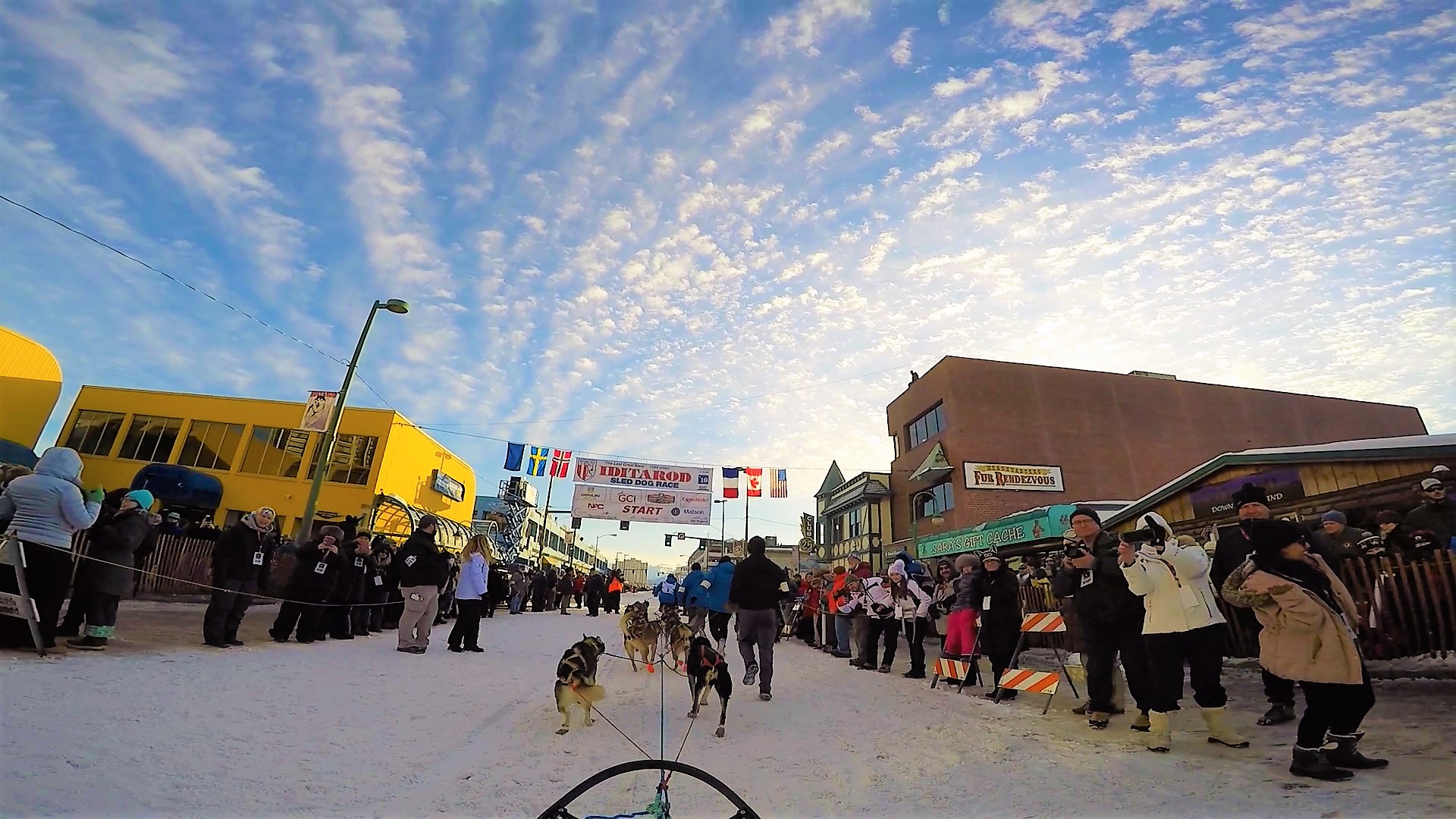 As we approached the starting line, the volume of the crowd significantly increased by the second. An Iditarod race official could be heard introducing Ramey and then me. As the time counted down and neared zero seconds, I couldn’t help but smile. When the signal to “go” was given, the dogs, with their tongues lolling and an almost smile on their face, quickly pulled the sled in between the waves of fans who lined the street. 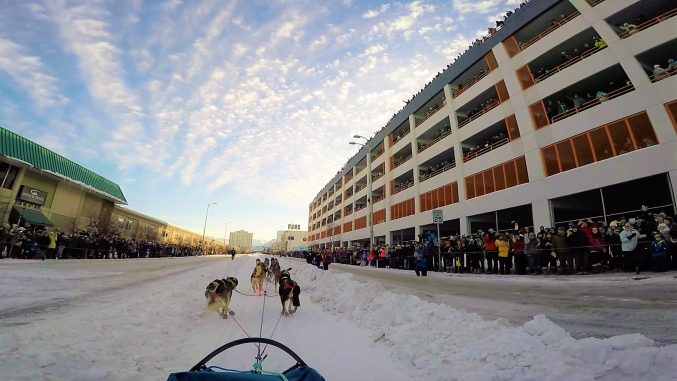 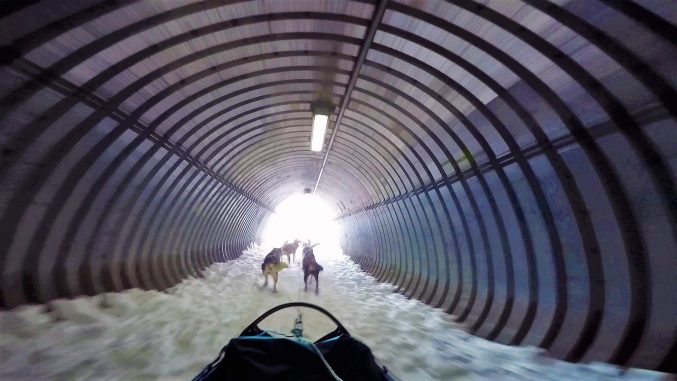 After traveling through the Anchorage streets for approximately a mile and a half, we ended up making our way though a variety of different trails and paths that are often used by bikers and skiers. We crossed an overpass, went through several tunnels, and ended up traveling on some incredibly scenic wooded trails. We were surround by birch trees, pines trees, a blue sky and a shining sun that pierced through tree boughs that were weighted down with snow. 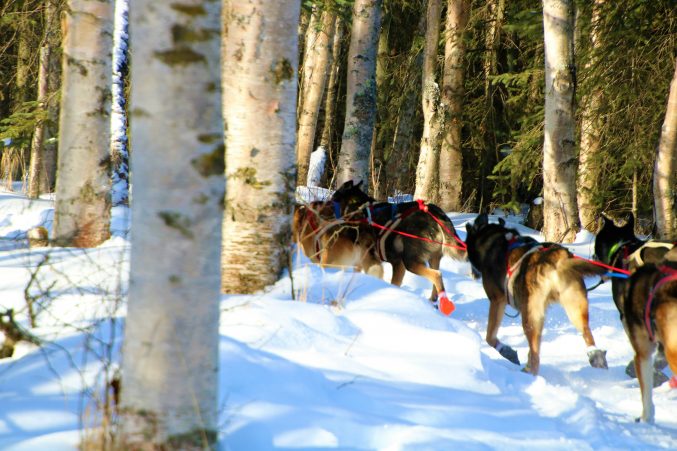 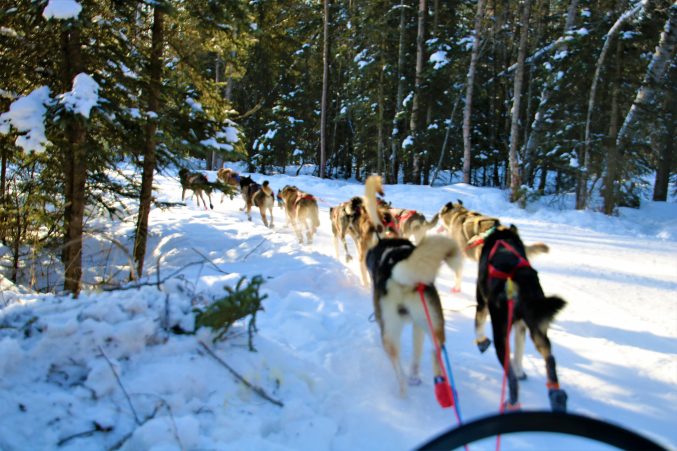 And, throughout the majority of route between the starting line and Campbell Airstrip, the Iditarod fans were showing their love and enthusiasm: the fans consisted of children and grown adults, men and women, Alaskans, and visitors from distant parts, too. People would often extend their arms out in order to get a high-five. They would shout and cheer, hold up signs of support, and at some locations, they even offered hot dogs, drinks, and other goodies. 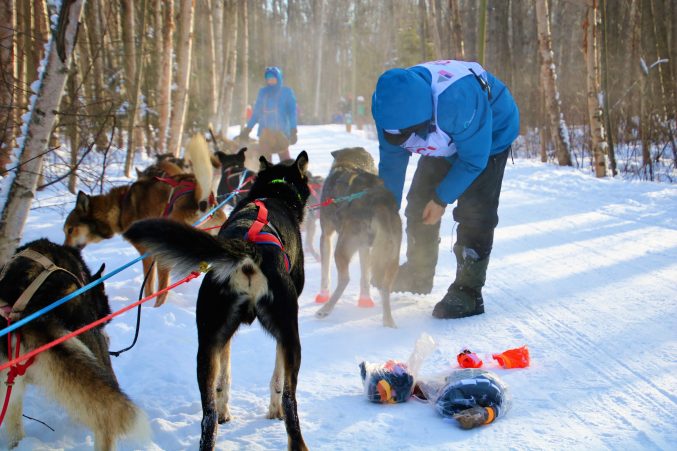 After pulling over in order to change all of the dogs’ booties, Ramey handed me a bag that was filled with all of the used ones he had just taken off his team. He asked me to toss them out to the young kids and fans who were out along the trail and cheering on the mushers. It was awesome seeing that Ramey wanted to share this experience with the fans, and furthermore, that he wanted to bring joy to the kids. I enjoyed having the opportunity to see the kids smile when they caught a used dog bootie– an Iditarod memento that they’ll keep for years to come.

As the old expression goes: “all good things come to an end.” After traveling for approximately eleven miles, we ended up reaching our final destination, Campbell Airstrip. Due to the fact that Ramey had an early number, I was lucky enough to watch the rest of the teams as they reached the checkpoint. Today’s experience was truly an unbelievable thrill. There is nothing that compares to the Iditarod mushers, fans, and atmosphere.

Enjoy some additional pictures from an unforgettable day: 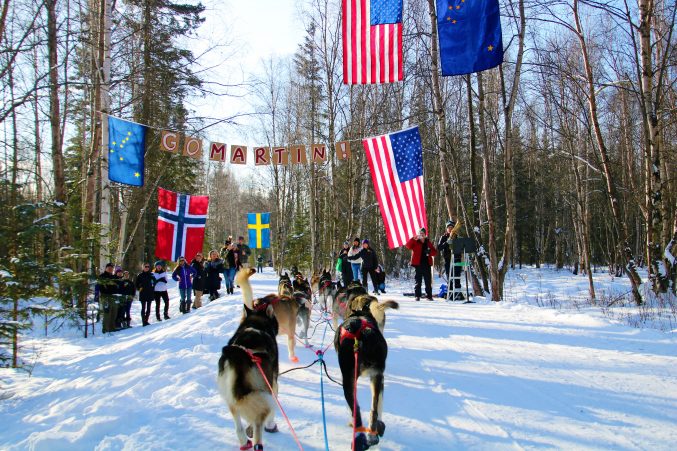 fans along the trail 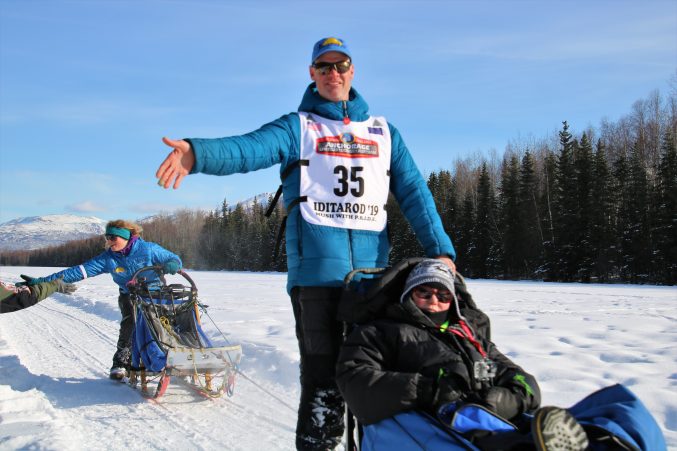 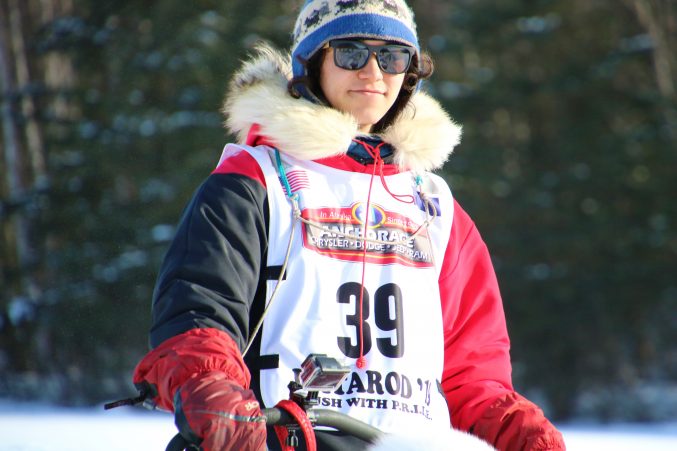 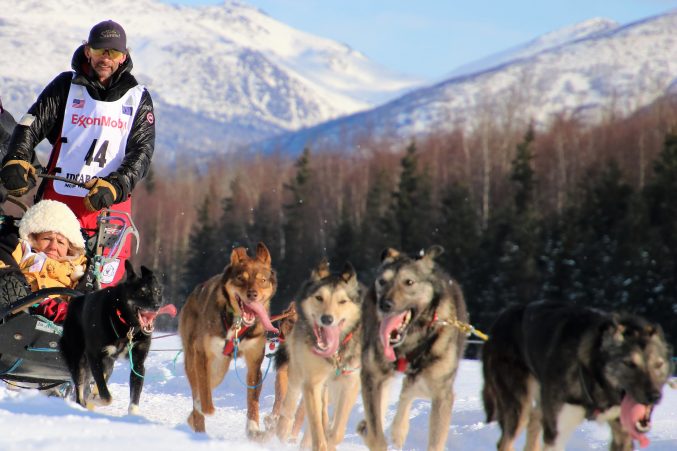 Lance Mackey with his IditaRider 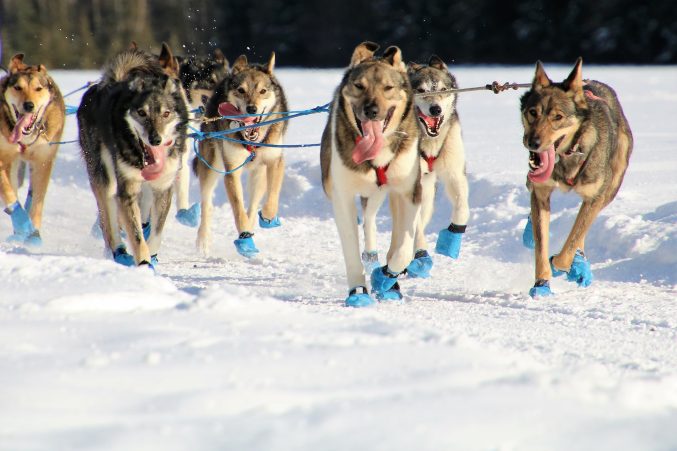 dogs happily running down the trail 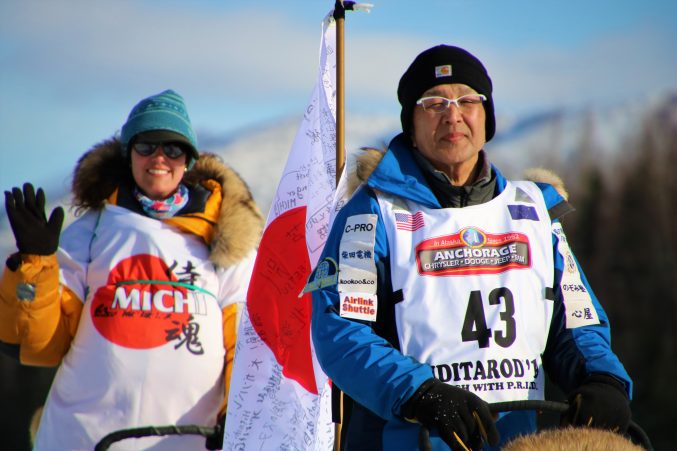 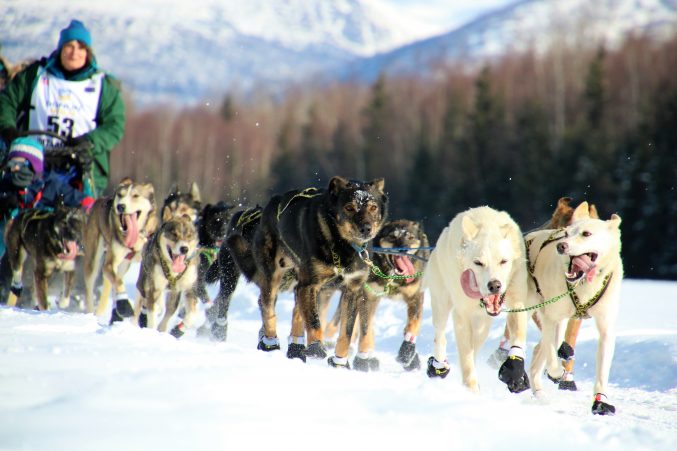 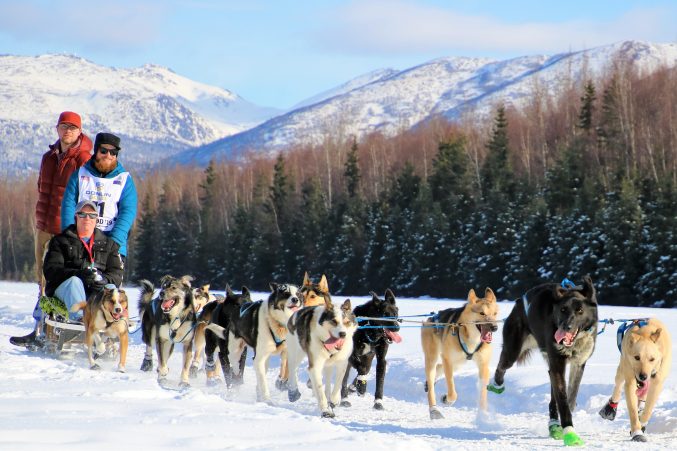