Could A Rookie Win the Iditarod? 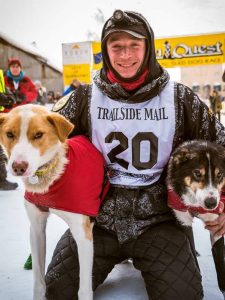 Grades 3-6 (others with modification)

One of the big buzzes that was happening at the first day of sign ups for the 2018 Iditarod is that Matt Hall, the 2017 Yukon Quest winner, has signed up for his rookie Iditarod run. One question that was asked repeatedly? “Could he win the Iditarod as a rookie?”

This is a question that kids ask all the time, “Has  rookie ever won the Iditarod?” The obvious answer is, well of course, just think about the first few years of the race! But in modern times? That’s a tougher question to think about.

This lesson uses the picture book, Stubborn Gal: The True Story of an Undefeated Sled Dog Racer, by Dan O’Neill as a jumping off point to tackle that question. After reading the text, the students will explore a text set that addresses Dallas Seavey’s Yukon Quest rookie run. Finally, the students write an opinion piece to support their position on whether or not a rookie could win the Iditarod.