Hi. It’s me, Leaping Libby. Everyone at our kennel is so excited!  Only a week left to go!

All the doggie-feelings have been on a roller coaster here at the kennel.  All winter, the racing dogs have been sharing stories about Iditarod 2019. It was the time of their lives, and the excitement for 2021 was growing.  Every training run got the race team closer and closer. They were practically bouncing out of their fur. 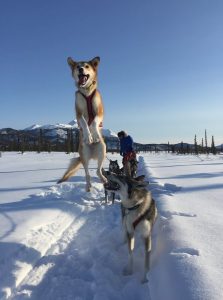 Mattie almost jumping out of her fur. They call me Leaping Libby, but Mattie is the leapingest dog I know. Photo by Libby.

Then they got the Bad News.  There was a human disease called COVID-19 causing trouble.  To keep the illness from spreading and making the people in the Alaska villages sick, the humans in charge of Iditarod were making changes to the race.  For one, they changed the race course for 2021. The humans in Alaska were making all sorts of plans to keep everyone safe, and the humans here were talking about their plans, too.  Then the sad day came when our humans broke the news: our team would not be going to the Iditarod this year. 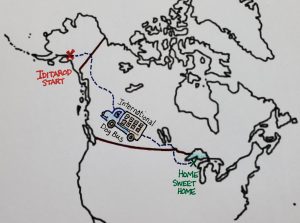 Iditarod or Bust! The route of the International Dog Bus. Sadly, we can’t drive across Canada this year, so it is “bust” for our team. But never fear, we will be back!

You can’t even believe how sad we were.  The mushers explained that the race team just couldn’t get there.  We live in the Northwoods of Wisconsin.  Last time, they all piled into our International Dog Bus and drove 3,500 miles all the way across Canada to Anchorage, Alaska.  Canada is the big country just to the north of us.  The dogs have fun stories about the drive to Alaska and back.  But this year, no trucks from the United States can drive across Canada.  No truck ride, no Iditarod. 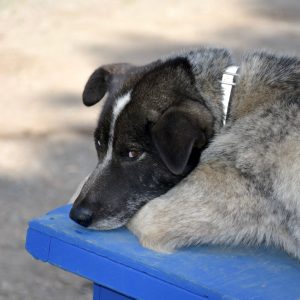 Aang is feeling as blue as this bench.

Then something great happened.  The mushers dressed up the racing dogs in their harnesses.  Somehow, we dogs thought that no trip to Iditarod meant no sled runs. No way! The mushers hooked them up, and away they ran with a whoosh.  Then the couch dogs and I even got to run. I just ran along on the side because I haven’t started using a harness yet, but I could keep up with the couch dogs just fine.

Sure enough, there would be plenty of pulling in the snow in 2021.  The dogs cheered up because, as my friend Wicksy says, “the best run is always the run I’m on!” 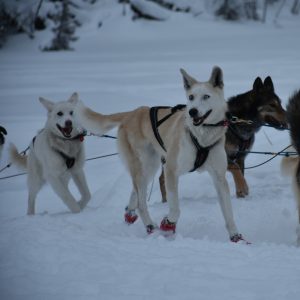 “The best run is always the run I’m on!”

The humans cheered up too, and they started talking about their friends in Alaska who would be running in the Iditarod.  I even heard that our mushers made something called “fantasy teams” where they pick their seven favorite teams to win Iditarod. They got all signed up with the Iditarod Insider so they can watch live video and follow the trackers. I am not sure what trackers are, but they make the humans happy, so I’m hoping to find out more.  I’ll tell you what I learn.

My team may not be going to Iditarod this year (I say “my”, even though I would be staying home anyway), but we are super excited to cheer on all the teams that will be heading out on the trail.  Hike!

If you want to make your own fantasy team, check out fantasymushing.com.  And be sure to sign up for Iditarod Insider.  It will be so fun to follow along!