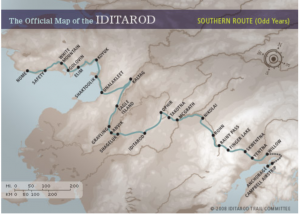 Aaah-ooooooh! In less than a week my canine friends and their human mushers will be racing in the Last Great Race – the Iditarod. This year’s race will be on the Southern Route. What does that mean? It is 2019, an odd number year, so the teams take the Southern Route. (There have been adjustments the last few years due to warmer weather and lack of snow, but we’re back on track.) There are a few reasons for the alternative routes. For one, the Iditarod has a great impact on the smaller villages in the interior of Alaska. It takes a lot of work, preparation, and clean up to host a checkpoint. The alternative routes allow more villages to be a part of the race, and at the same time it allows them time off to recover.

My friend, Valentina, had a question about the routes. She wanted to know my favorite route. The answer is – I like them both. The Southern Route is 998 miles, while the Northern Route is 975 miles so being a dog who LOVES to run, I like the longer distance. The Northern Route is typically a little colder and all of my adaptations (2 layers of fur, long tail, long tongue, etc.) keep me warm in the cooler weather so I enjoy the lower temperatures. On both routes, the humans who live in the villages are AMAZING!  Thanks for the question Valentina (and no, I have never come in first place, but all canines in the Iditarod are winners 🙂 ).  Send your questions to askzumadog@gmail.com. My paws will try to keep up typing answers.