Art: Create a Design: Iditarod Patch: A Project to Remember

It all started with a patch. 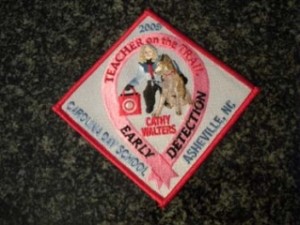 The patch was Cathy Walter’s Target® Iditarod 2009 Teacher on the Trail™ patch.  It was sitting on my desk at school after I returned from the Winter Teacher’s Conference in Anchorage.   A second grade student saw it and asked about it.  I explained the tradition started by Diane Johnson of the Teacher on the Trail creating a unique patch for his/her sleeping bag.  Her eyes lit up, “We should make patches for the mushers for their sleeping bags.”  The rest, as they say, is history.  Within a week twenty-four kids from grades two through five were signed up for the “Lunch Buddies:  Idita-Patch Project.”

The Iditarod had recently finished but the students’ excitement level was still high.  The younger students had the early lunch period and started by making a list of which mushers should get a patch.  When the older students came in during the later lunch period and saw almost thirty names on the board, they knew the list had to be reduced.  An interesting conversation ensued about who to pick.  Should it be favorite mushers, mushers who did something special, rookies, the top ten?  One thing for sure, was that Lance Mackey was on the list, as well as Hugh Neff who would be visiting our school in May. 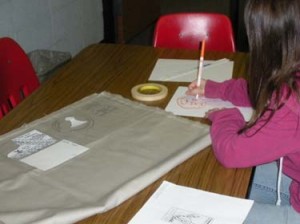 When presented with the selection problem at the second session, the younger students wanted more information.  What would they put on the patch?  Would they all start looking the same?  They didn’t want that!  So, they researched the mushers on the list and left the information for the older students to consider.  The older students selected nine more mushers they thought had a “story” or who won an award during this year’s race.  Each student selected a musher that interested him or her and created a patch design for the next session.

A week later, individual patch designs were shared and morphed from the input of the group until we had eleven working designs everyone agreed upon.  Then the fun began.  No one knew how to make a patch.  Well, almost no one.  It turned out that one little girl’s mother had a fancy sewing machine that could do “embroidery.”  She came in with Hugh’s Neff’s patch and it looked professional.  She explained how she found the dog 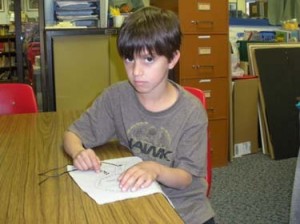 sled design online and helped her mom stitch it.  Everyone was impressed, but knew that every patch couldn’t be made that way.  Anyway, they wanted to roll up their sleeves and make the patches themselves.  After finding a few “how-to” websites (see resources below), it was decided that students would hand stitch the wording on fabric, cut out bigger pieces of felt, and iron them to the patch.  We would, however, use the fancy sewing machine to make the stitched edging.

Students worked at home and in class for the next couple of weeks until the patches were finally ready for final stitching.  “Sewing mom” came in and showed students how to iron the cut outs onto the patches with special paper and then how to sew the edging (even though she did all the stitching for safety reasons).  Letters were written to each musher to accompany the patch.

The Idita-Patch project was a success.  Students came together around a 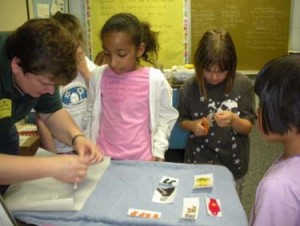 common passion and worked together as a team to create a memento for people they considered celebrities.  Hugh Neff received his patch when he came to our school and the other patches were mailed out in early June.  Hopefully in September, the students will have some responses from the mushers .  Even if they don’t, they were very proud of their work and hope to see a patch or two on a sleeping bag or jacket during the 2010 Iditarod.

*How to Create an Embroidered Patch:  http://www.instructables.com/id/Create-embroidered-patches-from-digital-images/

*How to Make an Iron On Embroidered Patch:  http://www.ehow.com/how_4814151_embroidered-ironon-patch.html