Going North – The Rush Is On!

In September of 1898, the “Three Lucky Swedes” discovered gold on Anvil Creek, founded the Nome Mining District, and started a new rush to the North.  By 1898, Nome had a population of 10,000, many of whom had arrived for the Klondike Gold Rush.  When gold was discovered on the beaches of Nome, the rush was on and thousands more people poured into Nome.  By 1900 a tent city on the beaches reached for thirty miles from Cape Rodney to Cape Nome.

The Nome Gold Rush was different from other rushes due to the ease with which the gold could be obtained.  It was literally lying on the beaches!  Initially, the gold was gathered by panning.  Later in 1899 human powered sluices and rockers were employed.  By 1900 small machines with hoses and pumps were in place, and around 1902 big companies took over.  The mining season was short, claims could only be worked from June to October.

We have been having our own gold rush in 3A.  We have been learning about the Alaskan Gold Rush and even did our own gold panning simulation!  I picked a chilly day and filled our buckets with freezing cold water just to make it a little more authentic!  It was great dirty fun!  In fact, one of the parents shared with me that his son has decided to move to Alaska and search for enough gold to start a kennel to train for the Iditarod!

Lesson Plan:  Going for the Gold 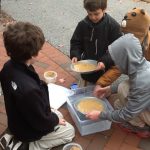 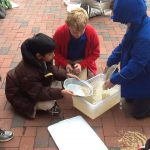 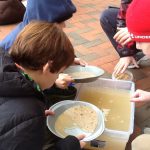 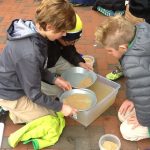 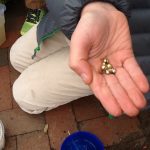