Finalists for the 2017 Iditarod Teacher on the Trail™ 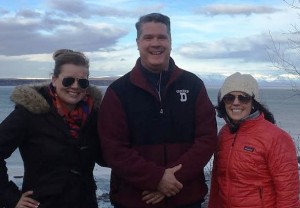 Annie Kelley and Iditarod connected during her student teaching experience in Ohio. In her classroom the next year, searching for an exciting teaching tool to use in March, she remembered the Iditarod. Since 2010, the race has been part of her classroom, and in 2012, the excitement exploded when musher Pat Moon visited 4th graders at her Chicago school, Saint Andrew School. Now, Iditarod is embedded in her classroom on a year round basis in math, social studies, and language arts. The culminating event is a school Iditarod-styled cross-curricular event including lessons in math, science, language arts, social studies, art, and music.  The “ChIditarod” concludes with awards at its annual “musher banquet”.

Using the Iditarod in her classroom led to many adventures in Annie’s life including trips across the country, kayaking in the Pacific Northwest, camping and hiking in the Great Smoky Mountains, and a month long journey to Alaska.  Annie would love the opportunity to travel down the historic Iditarod Trail and bring the race to life for thousands of students and teachers around the globe.

Don Thomas has taught at Dexter Southfield n Massachusetts for 23 years. He arrived at the independent school for grades PK-12 following his graduation from Kenyon College in 1991. He is married to Sarah, who has taught art to students for many years and currently creates pet portraits. Together they enjoy training their dog. When mushers refer to their dogs as their own children, he gets it!

His many responsibilities at Dexter Southfield included teaching both fourth and sixth grades over the years, writing and directing public speaking programs for his students, and creating and presenting assembly talks himself. He coaches eight different sports and coached the boys’ varsity lacrosse team to four consecutive tournament championships. He was awarded by his coaching peers the 2012 Boy’s Eastern New England Region High School Lacrosse Coach of the Year. Twice daily he drives a 74-passenger school bus containing PK-12 students.

While teaching full time, Don earned a Master of Education degree from Boston College in Elementary Education and a Certificate of Advanced Graduate Study in Educational Leadership from Simmons College. Possessing a spirit of adventure and a lifelong love of the outdoors, he has planned and led overnight hiking and camping trips for boys in grades six through ten. This love of experiential learning led him to Alaska to volunteer for a Habitat for Humanity project building homes for families.

For 14 years Don has been implemented Dexter Southfield’s unique Iditarod Educational Program, made possible through the foresight and generosity of a former parent. This annual program uses the Alaskan Iditarod dogsled race as a vehicle for students to explore in the classroom and, in other presentations, the values of the race.

Dana Tuyls grew up in Lake Mills, Wisconsin, and has a love of the outdoors and enjoys mountain biking, rodeo, snowboarding, and other activities. Growing up, her passion was showing every animal she could in 4-H, starting in second grade. With her dog Daisy, Dana won numerous local and state awards for obedience and showmanship. She has always had a love for dogs, both raising and training them. Dana babysat a little girl with Downs Syndrome and met Terrie Hanke, the 2006 Iditarod Teacher on the Trail™, through the girl’s family. Terrie inspired her to incorporate the Iditarod into her student teaching, and Dana has used Iditarod in her classroom ever since.

A 2010 graduate of the University of Wisconsin-Eau Claire with a Bachelor’s Degree in Elementary Education and Special Education, Dana always had a love for trying and discovering new things. During the summer in college, she worked on a dude ranch in Colorado as a wrangler and was moved by the beauty of the state. In July of 2012, Dana resigned her special education position in Wisconsin, accepting a fifth grade teaching position in Colorado. Selected for two national Teaching American History grants, Dana traveled to New York, and Georgia up to Washington D.C. She wrote social studies curriculum (Document Based Questioning) for her district to use and integrated STEM engineering activities as well as innovative teacher-led professional development ideas into her school. Dana earned her Masters of Science in Educational Leadership from the University of Colorado, Colorado Springs, and her career endeavor is to become an Assistant Principal in the upcoming years.