Misconceptions and More: Dogs vs. Wolves 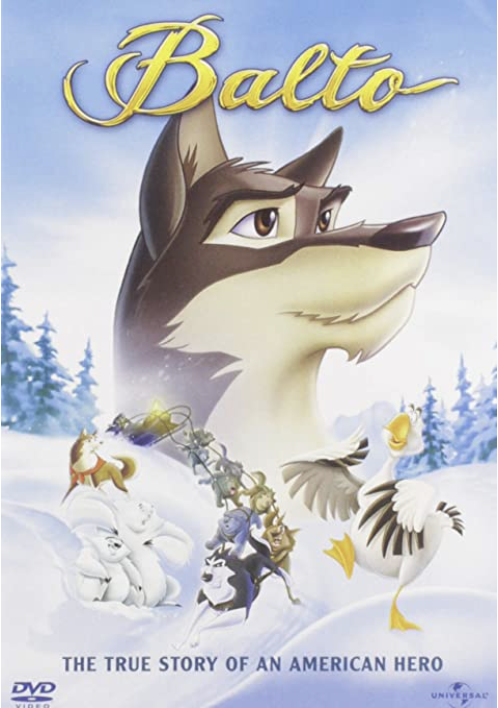 One common misconception about sled dogs is also a question I frequently get from my students: “Why do the dogs look so much like wolves, are they part wolf?” This misconception is not helped by the 1995 Disney cartoon movie “Balto”, where it is falsely stated that Balto is half wolf and “can’t  be trusted”. For younger children, this is a very complex question. Some of the dogs do resemble wolves in their facial look and coloring. Because of this, people sometimes assume that the sled dogs used today are part wolf. In actuality, all dogs are descendants of wolves, but that goes back thousands of years. As stated by the National Wildlife Federation, “Wolves are the wild ancestor of all our domesticated dogs, from poodles to bulldogs to greyhounds.”

As for the most common comparison, The classic Siberain Husky and Grey Wolf (or Timberwolf) do look very similar and they both have a similar thick fur that helps insulate their bodies in the cold weather, but that is where the similarities end. On the other hand, the differences between the Siberian Husky (Canis Lupus Familiaris) and Grey Wolf (Canis Lupus) are fairly significant when you compare their physical statistics. In his book entitled Cold Hands, Warm Heart, Iditarod champion, Jeff King discusses these differences. “I can’t help but be in awe of wolves and what they can do. They are big, powerful animals and much different than the sled dogs… I have talked to trappers who tell me that a giant male may tip the scale at upwards of 150lbs. The power and killing instincts of these extreme predators is awesome to observe” (pg. 138-139). 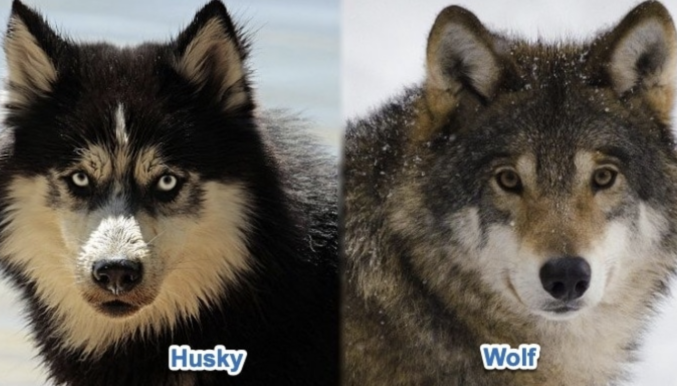 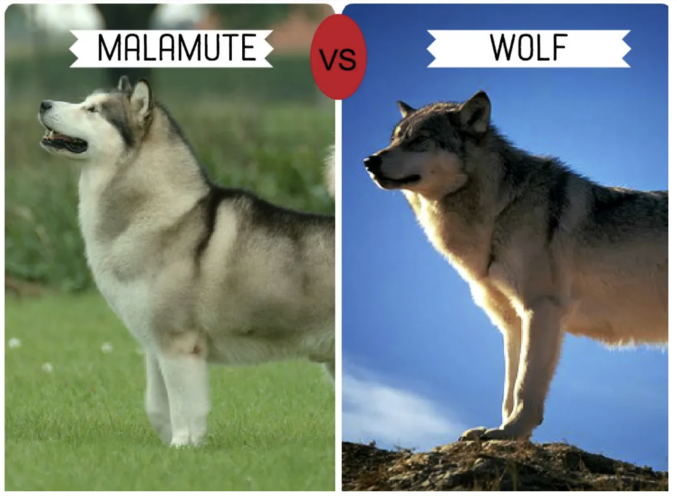 Below is a chart that shows the physical differences between the two animals: 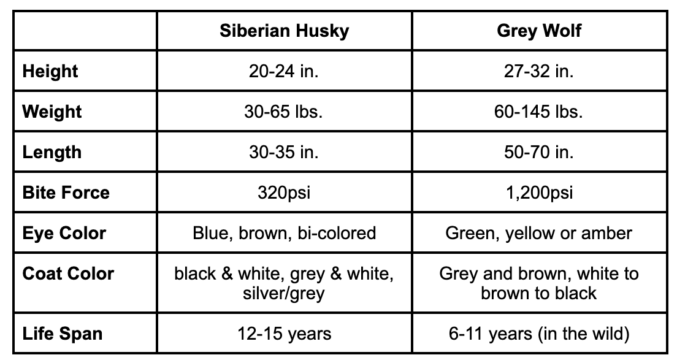 When it comes to the Iditarod race, the dog breed most commonly used are typically referred to as Alaskan Huskies. These dogs are long time descendants of the wolf, however the traits that we associate with wolves are far less prevalent in these modern domesticated canines. Alaskan Huskies are actually a mixed breed of numerous other dogs such as Siberian Husky, Greyhound, Border Collie, German Shorthaired Pointer, Salukis, as well as several others. Because of its diverse background, the Alaskan Husky is not considered to be its own distinct purebred breed, and therefore it is not officially recognized as such by the American Kennel Club (AKC).

When talking with lifelong musher, and history educator Dan Seavey about the differences between Alaskan Huskies and wolves, he stated that “They are in the same family biologically. The present day sled dog is many, many, many generations away from the wolf… centuries. When Europeans showed up in this country, there were already sled dogs of course and different peculiarities you could say. Up the Yukon river, there were dogs that were quite smaller than the dogs over just south of the portage area. Their dogs were bigger, so there were local differences all along, and what has happened with the race is that we have bred for; endurance.”

The endurance piece is an essential trait for the Alaskan Husky, especially for today’s Iditarod mushers as they make decisions when selectively breeding their sled dogs. As Seavey explained “I started out with Seppala Siberian Huskies, dogs that were brought over from Russia, Siberia, so that’s the name. There have been at least 25 generations of sled dogs by now, just with the Seaveys, and of course we are now breeding for particular things, not necessarily looks.” A recent study also showed that dogs were being bred specifically to pull sleds as early as 9,500 years ago.

As for the genetics of the Siberian Husky and Grey Wolf, their histories do overlap, however the exact origins of the domestication of dogs is still being researched and debated. Here is a link to an article about just that: https://www.newscientist.com/article/dn24581-wolves-turned-into-dogs-by-european-hunter-gatherers/. It is safe to say that the use of a wolf-dog breed would not be very beneficial for racing, due to specific aspects of their genetic code. According to The Cruelest Miles, by Gay and Laney Salisbury, “Wolf dogs tend to be intractable, aggressive, and territorial, and would have posed a danger in a team.” Wolves run as a pack to chase something. Sled dogs run because other dogs are running. [pgs. 141 – 143] According to a New York Times article by James Gorman (published June 25th, 2020) “The researchers also found that sled dogs, ancient and modern, did not show interbreeding with wolves, even though other modern dog breeds do, and dog-wolf matings were known in Greenland in historic times. The results suggest hybrids may not have been much use in pulling sleds.” Here is a link to the full article: https://www.nytimes.com/2020/06/25/science/arctic-sled-dogs-genetics.html

So, is there a connection between modern day sled dogs and wolves? The answer is yes, but their connection is purely ancestral. Sled dogs are in fact descendants of wolves, but it is also important to note that all dogs are descendants of wolves. Because of the visual similarities between the two, it is understandable why someone may come to the initial conclusion that sled dogs and wolves are related. However, as we delve deeper into the behaviors and temperament of each, it becomes clear that the traits of an Alaskan sled dog set them apart and make them their own distinct and individual breed. 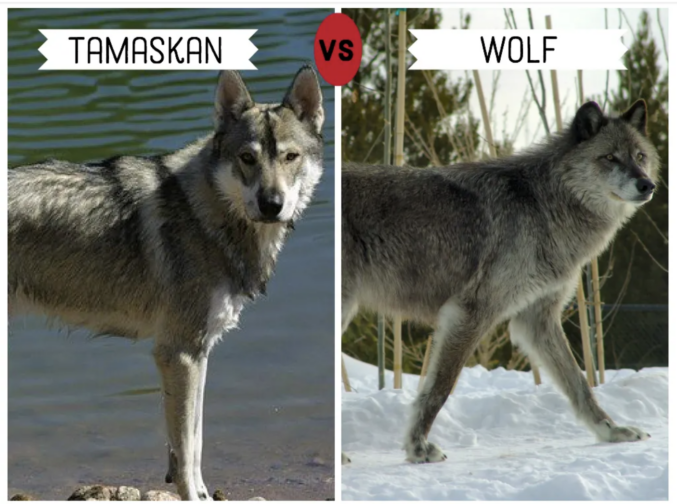 Teachers: Here is a lesson plan to do with your students that compare and contrast these two animals from 2018 Teacher on the Trail™, Heidi Sloan. Lesson Plan Wolves and Dogs