OFF the trail in Nome/Anchorage – Monday 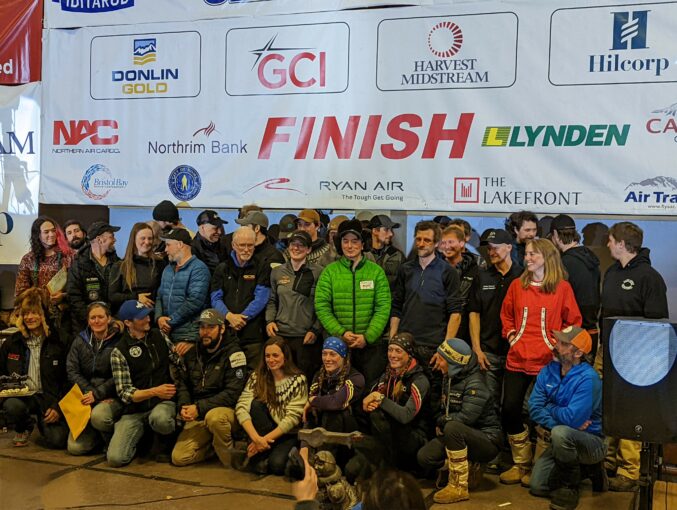 Last night was the musher banquet that formally wrapped up the 2022 Iditarod Sled Dog Race. It was a night to celebrate, for a variety of different reasons. Some for finishing their first Iditarod, some for taking a step back from the race for a bit, and still others for simply making through the blowhole and to the finish line. It was definitely a race for the books. Mushers shared stories from the trail, thanked sponsors, gave shout outs to their families and just enjoyed each other’s company. Again the sense of family in this group is clearly evident.

Some of the awards that were presented were:

The most inspirational musher award. This went to musher Matthew Failor. As you might have heard, and as I mentioned in a previous post from a couple days ago, Matthew had a run-in with a couple moose in the past few weeks. For his act of helping some fellow mushers with a moose on the trail during the race this year, he was awarded this honor by his peers. For earning this, Matthew received a free entry fee for next year’s race.

The Leonhard Seppala Humanitarian Award was received by Dan Kaduce. Dan finished the race in 4th place and finished with all 14 of his dogs whom he started the race with. This was an incredible achievement. He showed outstanding dog care throughout the entirety of the race and therefore was bestowed this award by the veterinarians of the race. This earned him a special plaque and covered the entry fee for the 2023 Iditarod.

The Donlin Gold Sportsmanship Award was given to Travis Beals. During the race, Travis lent a sled to fellow competitor, Chad Stoddard who had broken a runner during the race. I had actually talked to Chad about this while eating pizza in Unalakleet while on the trail and he even said then that Travis really “saved is butt”. I guess this also happened last year with these same two mushers. For receiving this award, Travis received a special plaque and a $3,000 check.

The Northern Air Cargo Herbie Nayokpuk Memorial Award this year went to Martin Buser. This award goes to a musher who most embodies the spirit of the famed “Shishmaref Cannonball”. When accepting this award, Martin told a couple detailed stories about his old friend, including one about how Herbie used to keep some of his food warm. He also mentioned that in his 39 Iditarod finishes, this is the first year he has won this award. He followed by stating that the only award he has not yet won is the Red Lantern, but he was ok with not getting that one… This award goes to someone who helps other mushers to develop their skills on the runners. Martin has a long line of Iditarod mushers whom he has mentored including the aforementioned Matthew Failor, and Sean Williams to name a few. As mentioned in the press release about this award, it states “The winning musher received $1,049 in “pocket change” inside a Northern Air Cargo jacket.” In addition, Martin also received a special trophy. 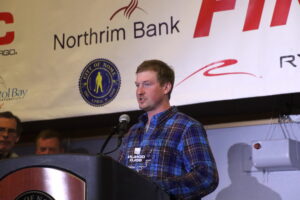 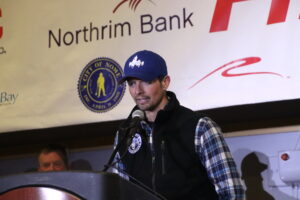 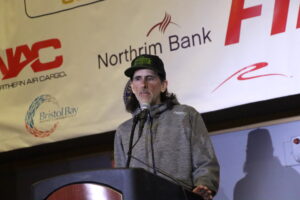 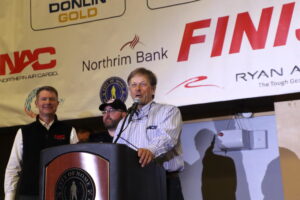 After the banquet, we headed back to the church for a relaxing night, and a little card game with the one and only “Debski”. She has been the long time volunteer cook in Nome and her ID badge even states her position as “Chef Extrordinaire“. She whupped me pretty good in Skipbo, but after an amazing week of meals, I’ll let it go. Maybe next time Debski… 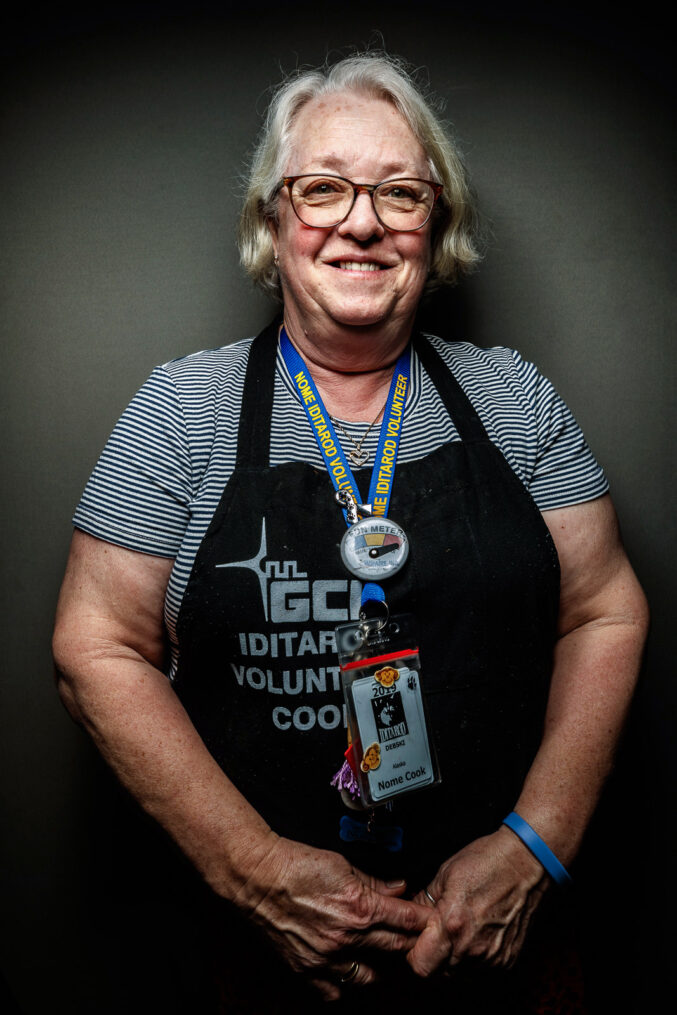 This morning I took my last trip to the arch on Front Street. The banners and flags were all down. the fencing and sponsors were all put away for next year. All that remained was the arch. The words engraved on it echoed more meaning to me on this day than ever before. Because it truly marked MY “End of Iditarod Sled Dog Race”. I can only hope that I will again one day be able to walk under this famed landmark of the Iditarod. Until we meet again Iditarod, thank you for this awe inspiring journey. 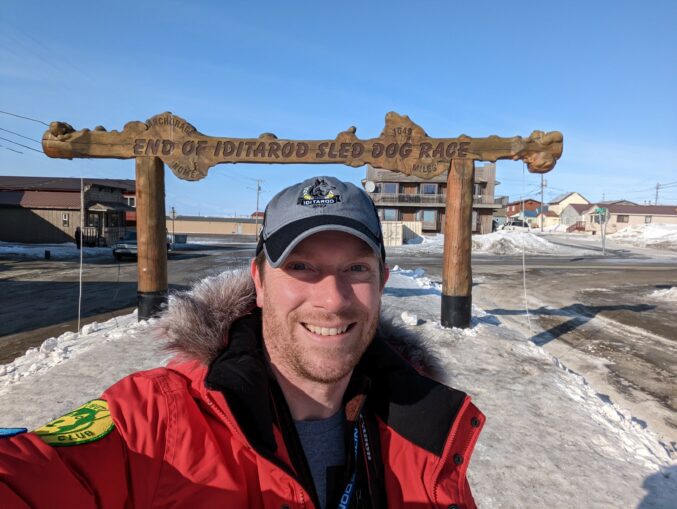 My final morning at the arch.

Adventures of Booloo: I was able to sneak Booloo into the banquet as my special guest. Unfortunately, when he was on the 4 wheeler, it did not start. I guess that was saved for Chad Stoddard later… 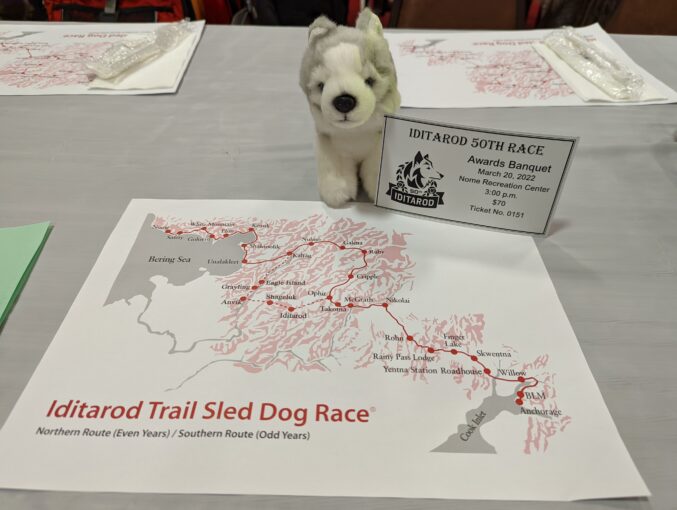 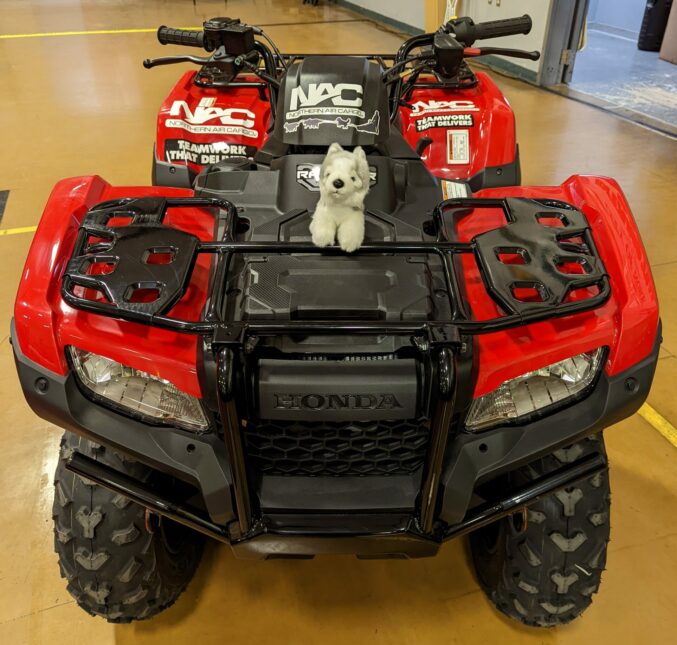 Teachers: Have a discussion with your class about their feelings when something they have been looking forward to, finally comes to an end. What was something that sticks out to them? How did they feel during the event? Why was it so special?How do they deal with life afterwards, when things went back to “normal”? These are great conversations to have with your students about important times in their lives, and how to then look forward to the next thing.