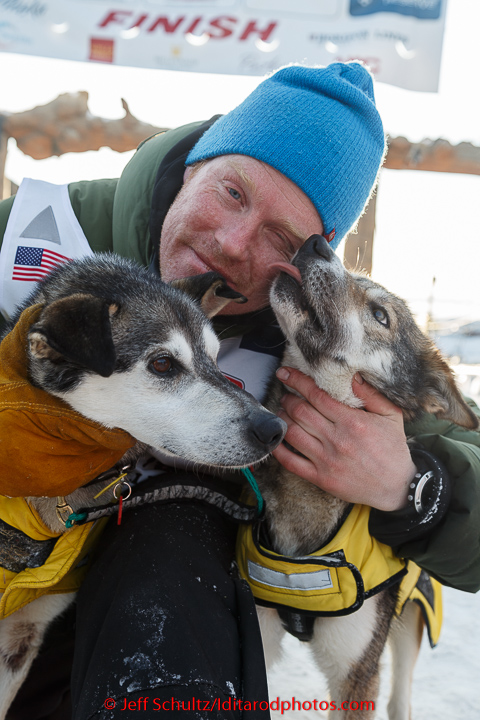 Mats Pettersson hugs his leaders at the finish line in Nome on Thursday March 19, 2015 during Iditarod 2015. (C) Jeff Schultz/SchultzPhoto.com – ALL RIGHTS RESERVED DUPLICATION PROHIBITED WITHOUT PERMISSION

One of the unique characteristics of the Iditarod is the fact that this competition attracts mushers from all different parts of the world. This year’s race includes mushers who are from the United States, Canada, Norway, Sweden, France, Finland, Switzerland and Japan, just name a few. One musher, in particular, who’ll be representing Sweden, is Mats Pettersson.

According to his biography on the Iditarod website, Mats was born in Kiruna, Sweden. A former professional hockey player, Mats had to give up protecting the hockey net as a goalkeeper due to a bad snowmobile accident. Mats spends his time focusing on his dogs and his sled dog company, Kiruna Sleddog tours. An avid outdoorsman and a nature lover, Mats also loves spending time with his wife and children. 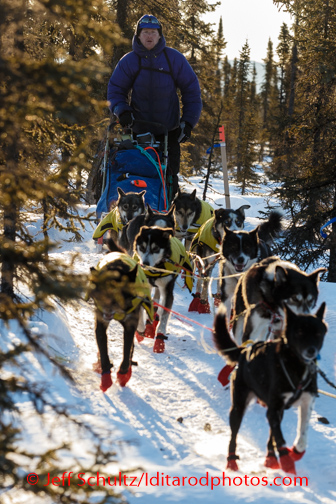 Last year, Mats placed 18th in the Iditarod- certainly an incredible accomplishment. He is currently preparing to run his 6th consecutive Iditarod. I was able to ask Mats some questions to get to know him better. Check out some of his answers that he shared with me:

Who has been your most influential teacher, mentor or coach?

Mats stated that Lars Lindh is one of his most influential teachers and certainly one of his friends. Lars taught Mats much about caring for the dogs, especially in regard to meeting their needs and high standards.

What is one of your favorite memories from being on the trail?

Being alone with all of his dogs in nature is treasured by Mats. Additionally, Mats noted that one of his favorite memories was coming over the high peaks before Golovin Bay during the 2018 Iditarod.

Can you recall the most challenging obstacle that you’ve encountered on the trail? What was it and how did you overcome it?

When did you begin mushing? Who or what influenced you?

Mats began mushing in 1995. One person who influenced him greatly was his grandfather, Erik. Erik worked with dogs, reindeer and other wild animals. 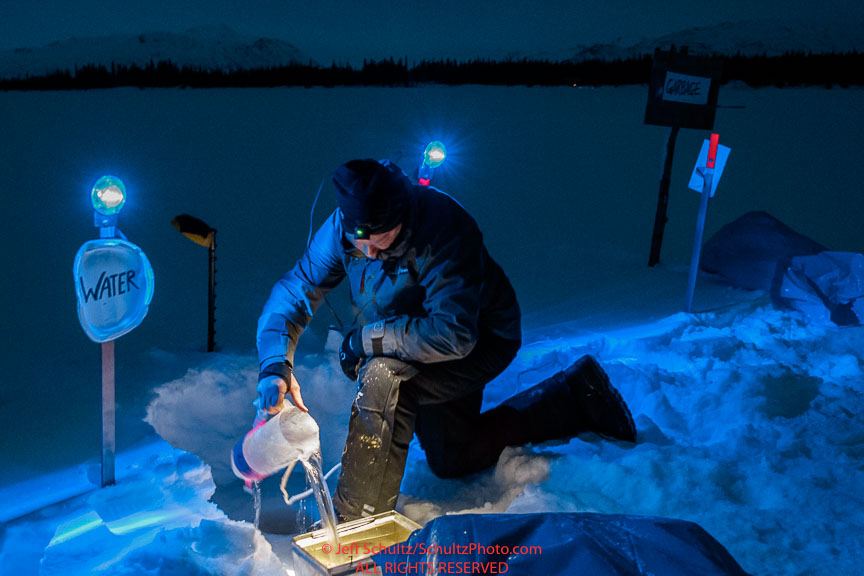 Mats Pettersson gets water from a hole in the lake during the early morning hours at the Finger Lake checkpoing on Monday March 05, 2018 during the 2018 Iditarod
Photo by Jeff Schultz/SchultzPhoto.com (C) 2018 ALL RIGHTS RESERVED

Do you have a “favorite dog story or moment” that you’d be willing to share?

Mats shared that his favorite moment was crossing the finish line during the 2017 Iditarod with his “best buddy [and] main leader, Titan.” That Iditarod was Titan’s last race.

What advice would you give someone who is interested in getting into mushing?

What is your favorite book?

Were there moments when you were bored or lonely on the trail? If so, what did you do to pass the time?

When Mats is bored on the trail, he simply remedies his boredom by looking at his dogs.

Make sure to cheer on Mats while he makes his way to Nome during this year’s Iditarod!