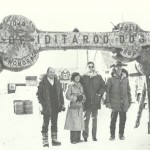 There is quite a history behind the Burled Arch.

During the second Iditarod, (1974) the last two mushers carried paper plates, one carried by Joel Kottke, finishing 25th, saying “The” and the other carried by Red Fox Olson, the Red Lantern, finishing in 26th place, saying, “End”.  (http://iditarod.com/race/1974/)

*View an Insider Video Clip showing history behind the original burled arch monument.  (You must be an Insider subscriber to view this video.)

Teaching Idea for using the Burled Arch as a primary source. 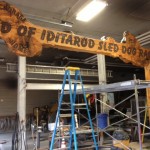 Date:  July, 2013: The famous Burled Arch that marks the end of the Iditarod Trail Sled Dog Race got a facelift and is now resting comfortably in Nome, ready for the 2014 Iditarod.

At least 30 hours of work went into the arch’s facelift.

A big thanks goes out to the City of Nome for providing a space for the Nome to rest during the renovation process and for their continued support to Iditarod.

According to Lew Freedman in his book, Father of the Iditarod, the story about Joe Redington, Sr., Red Olson, the 1974 Red Lantern winner was a bit disappointed when he reached Nome.  According to the book and Howard Farley’s memory, Red stated that after spending thousands of dollars and twenty-nine days on the trail, it wasn’t much fun to get to Nome.  There was nothing to say you were at the finish line.  Red made it clear he was going to do something about it.

Red, a gold miner in Fox, AK, felt that the Iditarod needed a permanent marker at the finish line.  During the end of the 1974 Iditarod, Joel Kottke, finishing 24th, wore a paper plate that read, “The” and Red Olson, finishing 25th and in Red Lantern position, wore a paper plate that read the word, “End”.  This just wasn’t good enough for Red who felt it a was big letdown for mushers arriving in Nome.  So he donated the famed Burled Arch.  But before this monument could mark the end of the trail for the Iditarod mushers reaching Nome, someone had to build Red’s vision.  No worries, Red “Fox” Olson was in charge of the project that has led to the well known monument that thousands of dogs and hundreds of mushers have arrived in Nome beneath.

The original spruce log that formed the cap of the arch was found along Rosie Creek, southwest of Faribanks by Red himself.  Red enlisted the assistance of the local Lion’s Club to work on this project.  The club members ‘logged’ about 500 hours shaping the old log and routing the inscription on it.  Off and on during the project, Farley heard updates from Red until one day.  Red let Farley know the arch had been shipped.

Nome resident and Iditarod volunteer Howard Farley met the arch and got word from the pilot from Wien Air Alaska, “That’s some piece of lumber!”

Because the shipping rate had to be paid, Farley helped raise $1,300 by passing the hat in Nome, to cover the freight charge.

The arch was originally known as the Red “Fox” Olson Trail Monument.  It was first used in 1975.

The first musher to cross underneath the arch was Ruby musher, Emmitt Peters, 1975 Iditarod Champion. 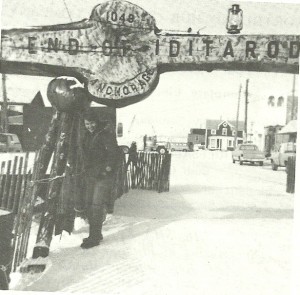 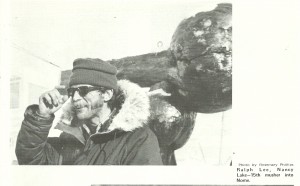 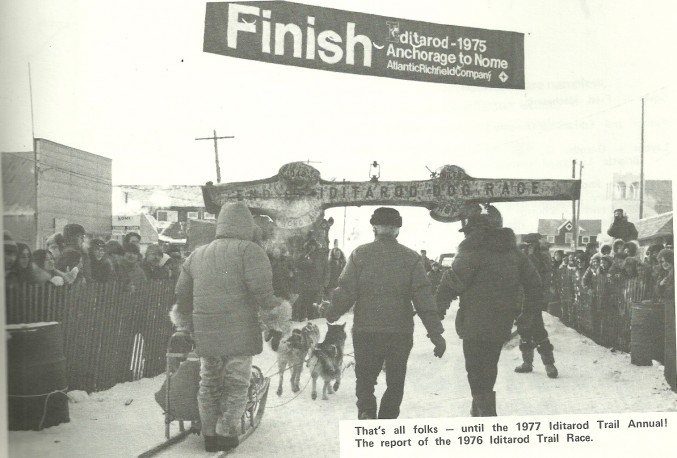 The ‘Off Season” and the “Accident”

After each race was over, the arch was moved from Front Street to a summer resting place along the street next to the Nome City Hall.  Hundreds of visitors to Nome in the summer stood next to or under the arch for photographs.

Just as the weather during the  Iditarod Trail Race is often harsh and cruel to the mushers, the climate in Nome and the effects from the sea’s salt air were cruel to the arch.  Over the years, the arch began to deteriorate.  After the end of the 1999 Iditarod, as a forklift rolled over a curb carrying the assembled arch to its summer resting place, it broke into several pieces.  The largest broken part of the arch read “End of Iditarod Dog” and another piece read, “Race”.  The arch was in at least five chunks and the burls 2 feet in diameter, had broken from the main log.  City workers used garbage bags to hold the smaller pieces.  This wasn’t the first time the arch needed repairs.  Ten years earlier, city workers had filled cracks in the arch with gallons of glue and epoxy as a means to hold it together.

Spectators to the accident remember hearing a large bang and crack as the arch fell.  The sound was startling to those nearby but once the dust — or actually snow had settled, many scrambled for a closer look and perhaps a piece of the arch.

Some repairs were made to the old arch and today, it hangs as a memorial in the Nome Recreational Center. 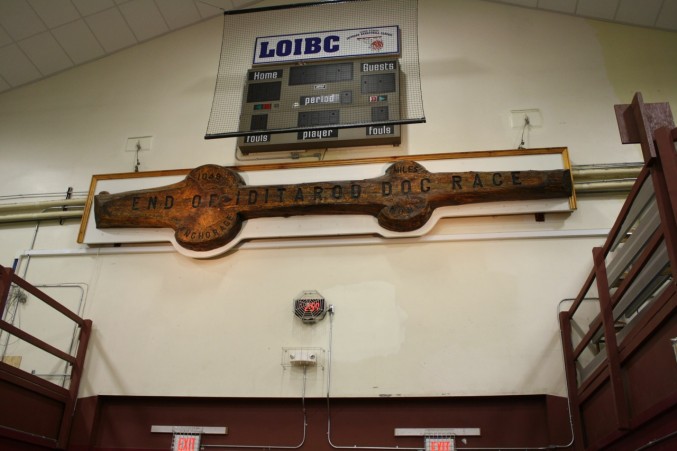 In the spring of 1999 the Iditarod Trail Committee announced that a new arch needed to be built.

Logger and Iditarod volunteer, Jim Skogstand contacted Iditarod Trail Committee and let them know that he had a burled spruce tree on his property in Hope, AK, that he’d donate to the Iditarod.  After the log was felled on June 8, 1999, community members of Hope worked to strip the log of bark, completing the project in one day.  The log was then loaded on a truck and shipped to Sterling.

The log had to air dry for six months before work could begin.  In December, the log was brought into Alaskan Wildwoods shop.  Bob Kuiper of Alaska Wildwoods had volunteered to carve the 28 ft section of the log into the new arch with the completion date of having it completed in time for the 2000 race.  Bob studied the log to find the face for the new sign.  He used a chainsaw with a long bar with  a man hanging on to each end to cut the log.   Then the log was planed and sanded to get a smooth, flat surface.  A router was used to carve the letters.  The letters were painted and a coat of commercial grade log oil was applied to the sign.

There are more than 50 burls of all shapes and sizes in the new arch.  The Weaver Brothers Trucking Co. volunteered to transport the arch from Sterling to Anchorage.  Northern Air Cargo shipped the arch to Nome in February at no charge to the Iditarod or the City of Nome.  The sign was assembled on new spruce posts by Nome Public Woks volunteers in time for the 2000 Iditarod.

During the race, the arch has been the welcome mat for each musher finishing the race and it serves as the “Official” Finish Line of the Iditarod Trail Sled Dog Race.  During the rest of the year, visitors to Nome have had their photo taken near the sign. The arch has been sitting outside year round exposed to the sea air and the harsh weather conditions, making it necessary to renovate the sign every few years.

Being an important symbol for the Iditarod Trail Sled Dog Race® the care and upkeep of the arch is necessary and is taken seriously.  This summer, about 30 hours were spent giving the arch an important facelift.   We’d like to thank the city of Nome for providing a place where the sign could be housed during the renovations process.  Thanks, Nome! 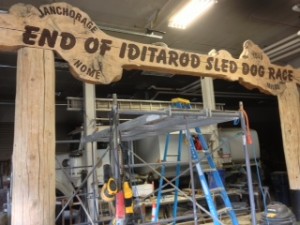 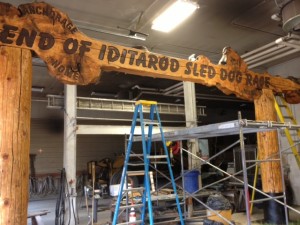 The Burled Arch is ready for the 2014 Iditarod!

Click on thumbnail images to view a larger image.

All photos in this gallery are by Iditarod Trail Committee. Reproduction prohibited without written permission from the photographer. 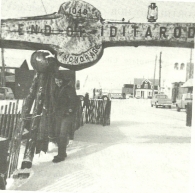 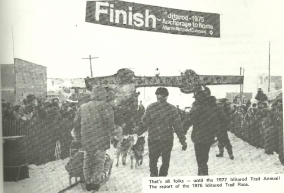 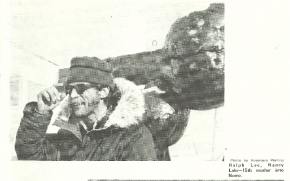 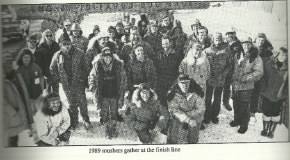 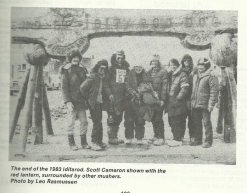 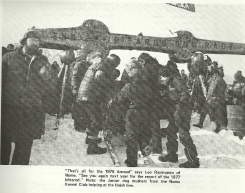 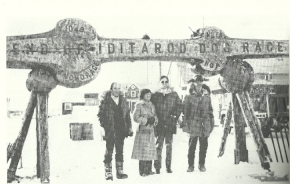 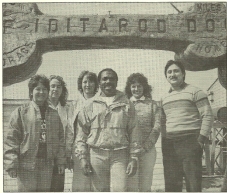 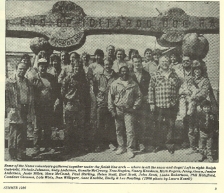 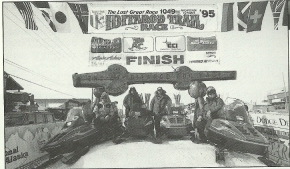 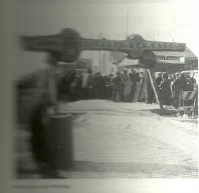 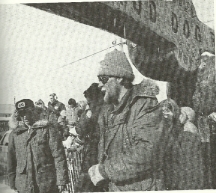 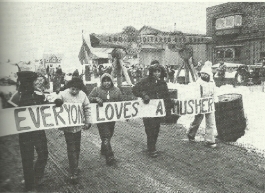