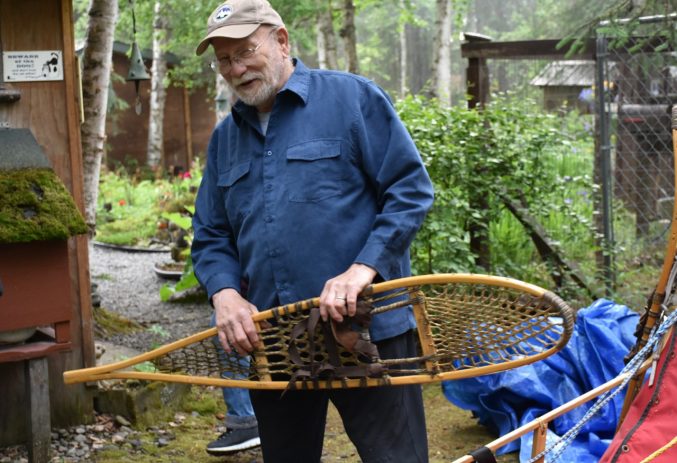 Artist, illustrator Jon VanZyle with a snowshoe he used on the Iditarod Trail

One aspect of our Iditarod Summer Teacher Camp learning involves comparing and contrasting Iditarod races in the early days and current years. Several mushers have alluded to the changes. Last evening, we visited the home and studio of artists Jon and Jona VanZyle. Jon spoke with us and told about some of the developments he’s seen since he competed in the ’76 and ’79 races.

He relayed the fact that in the beginning, 1973, most mushers just used a tarp of some kind over their sleds. His kennel partner decided tarps were inefficient, so he designed a sled bag, took the drawing to a tent making company in Anchorage, and used that closeable bag for his trek to Nome. Other mushers apparently ribbed him about it, but the following year, most mushers used sled bags and have ever since to keep their gear contained and dry. 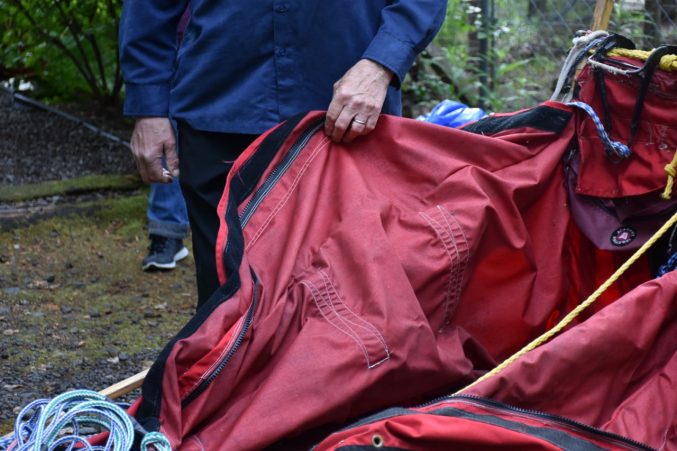 Another change mentioned by Jon was the long snowshoes used in the old days. Breaking trail through unmarked territory was often a necessity; using larger snowshoes to tamp down deep snow was really important.

Finish times for the 1,049-mile race to Nome have dramatically decreased over the years. Early Iditarod mushers knew the race would be a long camping trip. Mushers would stop along the trail, cut up a small tree for firewood, put down spruce branches for the dogs to rest upon, and start the fire. In their cooking pot, they would keep adding snow. Because snow is so dry, to get any usable amount of water, scoop after scoop of snow has to continually be added to the heated pot. Once the fire was roaring and enough snow had melted into water, the musher of old could warm his and the dogs’ food. All this took hours more time to accomplish, thus mushers reached Nome much later than today. Now, mushers pour a bottle of Heet fuel into a pan under their cookers, light it, and have instant fire! Cindy Abbott, red lantern winner in the 2017 race, told us a startling statistic. Her last place finish time this year would have beaten the winners in 14 of the earlier Iditarod races! 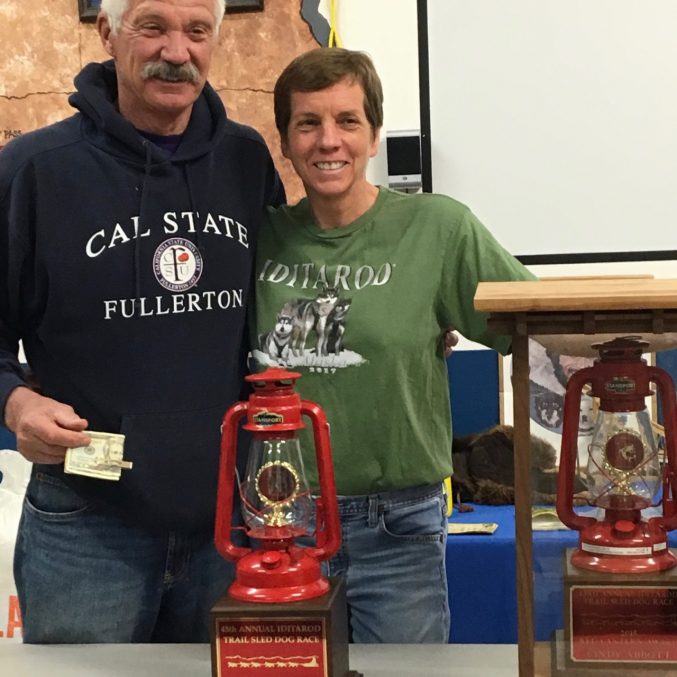 Cindy with her husband, Larry, and her two red lantern awards from 2015 and 2017

It’s great hearing the history from past mushers and seeing innovations of recent competitors.