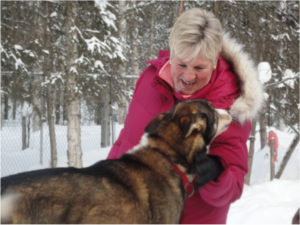 olmes challenged us to find a favorite “Flashback Photo” and write about it. I knew EXACTLY the picture I would choose. This has always been one of my favorite pictures. Here’s why . . .

In March of 2012, I went to the Iditarod Education Conference as a Teacher on the Trail Finalist. It was there I met my inspiration, Andrea Aufder Heyde – known to everyone as Finney. Finney was a teacher in Indiana who loved the Iditarod and wanted to bring it into classrooms. In 1999 she contacted the Iditarod and presented the idea of them letting her come to Alaska to follow the race with the goal of sharing her experience with school children. Finally with the Iditarod OK, she packed her bags and headed north. There was no official title and no one to help her prepare, so she hitched rides with the Iditarod Air Force and slept on the floors of the checkpoints telling them she was the Teacher on the Trail.

It was a success! I’m sure this was due to Finney’s outgoing personality, sense of humor, and enthusiasm for the race. She was the first, but not the last. I was teacher number 15 in 2013, and in 2023 Julianne Westrich will be the 24th (Jim Deprez was the TOTT for 2 years due to Covid). This picture was taken 15 years after her adventure and her sincere passion continued to show on her face! Thanks Finney!