Moments with Mushers: How the Race Has Changed

In hindsight, this question was a really meaningful one to ask this year, given all of the changes due to Covid. I presented it to  some of the mushers over the summer, long before the route was changed to the “2021 Gold Trail Loop”. Given what we know now, I’m sure many of them would talk about the differences and new challenges that they are currently facing with running the route in reverse from Iditarod back to Willow.

Some of the checkpoints and trail routes have also changed; even after the race officially started! The former town of Flat (~20 miles south of Iditarod) was supposed to be the turn-around point for the race – but was removed due to heavy snow conditions. And some of the traditional checkpoints like Takotna did not serve as a stop this year. (So unfortunately, no pies either in Takotna).

As my conversations with the mushers were prior to all of these updates and changes, I talked to them about their thoughts on how the race has changed over the years. One thing that was interesting to me was that they all mentioned the pace of the race. Pictured here is Mitch Seavey at the finish with the fastest Iditarod win time (of  8 days, 3 hours, 40 minutes and 13 seconds) and Carl Huntington with the slowest winning time (of 20d 15h 1m 7s).

Below are some of the responses I received from mushers about what else they thought has changed the most since the inception of the race. 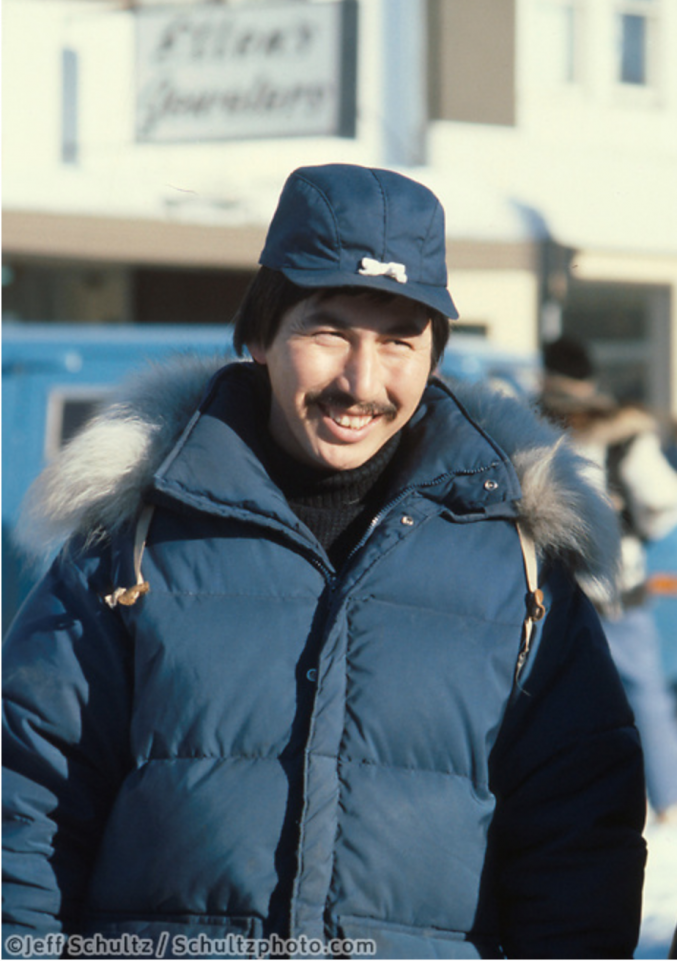 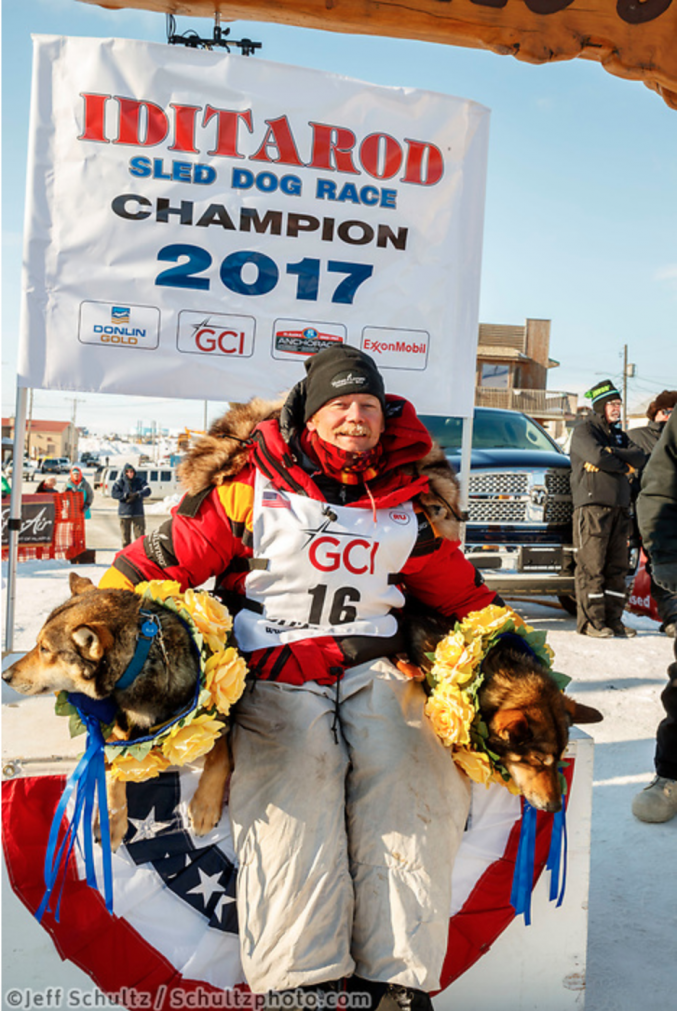 Mitch Seavey poses with his lead dogs Pilot and Crisp on the winner’s stand after winning his third Iditarod in record time of 8 days, 3 hours, 40 minutes and 13 seconds in Nome during the 2017 Iditarod on Tuesday afternoon March 14, 2017.
Photo by Jeff Schultz/SchultzPhoto.com (C) 2017 ALL RIGHTS RESERVED

As told to me by Dan Seavey

There are a lot of ways that it has changed. There is a lot that is still the same, same trail, same checkpoints, same weather, but a lot has changed. The dogs have gotten better, the equipment has gotten better, the training has improved, but I would say that the one thing is that it has gotten faster. A lot of that stuff [above] goes into it, but the times have really gotten much faster. I remember that back in 1973 – that first race – when I finished the race in 3rd place, it took me 20 and a half days [20d 14h 35m 16s]. But now my son holds the fastest time of 8 days, 3 hours and 40 minutes or something like that [and 13 seconds]. And I think that record still holds. So the biggest change has been the time.

As told by Martin Buser

“I tell people, if you think everything has changed, you are correct!

Dick Wilmarth in ‘73 took 21 days to win the Iditarod. The slowest team was on the trail for over a month. Now, the Red Lantern winner is usually off the trail in 14 days. So for many years, what is now the Red Lantern finishing time used to be the winning time. So that gives you a bit of an indicator of how things have changed.

With all those changes comes the evolution of rules of course, I say rules are like laws for society. Rules in sports evolve because people like me push the envelope. I can give you a couple of examples. Like the ski poles are a good example. I was the first to introduce ski poles to the sport. So that was discussed in the rules committees and of course eventually allowed, and now everybody has ski poles in their sled. 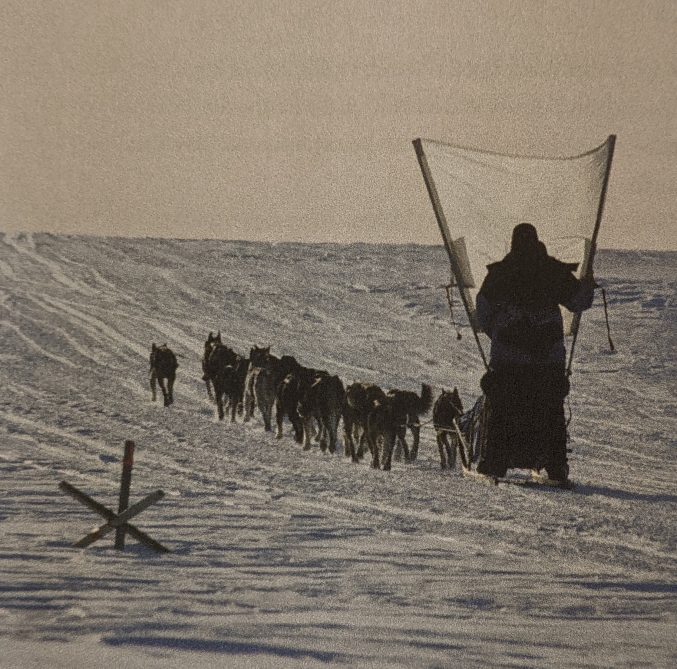 So then I had my ski poles in my sled and I thought well, this is pretty convenient. Every now and again I have a tail wind, so why dont I make a sail to put over my ski poles to help me propel my sled when the winds are favorable. So I brought the sail to the sport. Unbeknownst to me, there were old timers that were smart, they used to use the wind to their advantage if they ever could. Subsequently we actually found pictures of some of the old timers having little sails on their sleds. But the rules committee looked at that situation and disallowed sails, so nobody has sails in their sled now. So that’s a good example of the evolution of rules.

Everything is sparked by something, the limit of dogs is a funny one.  It used to be wide open, we could have as many dogs as we wanted.  Then one guy showed up with almost 40 dogs.  They made him drop about 20 dogs at the first checkpoint.  That of course sparked the necessity for a new rules change.  They said, well you can only have 20 dogs in harness which meant everyone started running 20 dogs.  Then it became a 20 dog maximum which was ironically interpreted that it’s a 20 dog minimum which was not the case at all.  So then it was addressed again and the rule was changed to 16 dogs and then to 14 dogs.  Keep in mind that Rick Swenson won the Iditarod once starting with 12 and finishing with 11, so that’s a good example of how the dog numbers don’t need to be huge.

It’s an ever evolving situation. Rules are changed, rules are addressed, and everything is done for the benefit of the race. So like I say, they are very much like the laws of the land, the laws of society.”

As told by Matthew Failor

“The obvious answer is it has changed from 16 dogs maximum now to 14 dogs now is the maximum. So I started in 2012, and raced every year since. But I would say the most dramatic change is the pace that the race is now. 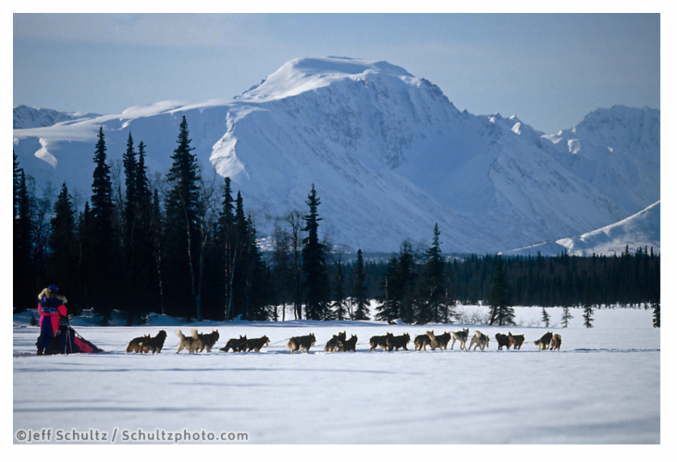 I finished the Iditarod in 2012 and I think I almost did a 13 day race and I was near the back and some of the other teams took 14 day, and it was NOT a slow trail, it was a pretty good-to-fast trail that year. I don’t think you could get away with that pace nowadays. That pace would be based on a slow trail nowadays. I think if I took my time now like I did then, then Mark Nordman would give me a phone call during the race and say “Hey, you gotta speed up”. The entire field has just gotten that much better. But you know, all of the volunteers can’t stay out there just because I am taking my time. So the competitiveness of the event has improved by hours, you know, probably 12-24 hours since a decade ago.

Basically what that means is that if you are trying to finish the Iditarod in 2020, you have to do a 13 day pace or faster, because if you are shooting for 14-15 days, you more than likely won’t finish. And that is a normal to fast trail. It’s something that’s organic. It’s not really forced by the judges or the Marshall, it’s just that if the majority of mushers are moving along at a good pace, and then there’s dozen mushers strung out with 50 miles, 150 miles between each other, the Iditarod can’t sit around and wait for each musher. People need to get back to their job, and they can’t spend all of their vacation time.

Like I said, in 2012 there were 70 mushers and I finished near the back and it was a 14 day race and there were still teams behind me, and it’s only gotten more competitive throughout the years. So nowadays, 13 days would be the very very last team on the trail. The side note is Mark Nordman never wants to make that phone call, but as the Race Marshall, you can’t just have 1 team dragging their feet, they have to keep moving. Besides 16 to 14 dogs and the pace of the event, the gear has also changed.”

Teachers: Here is a great lesson from 2019 Teacher on the Trail, Brian Hicox comparing speeds of mushers from the 2016 and 2018 race. This also includes a comparison that can be used during the race this year!