To go along with Halloween later this month, I thought it would be appropriate to post about what a few of the mushers remember as some of their scariest moments on the trail. It may be scary for a completely different reason, but is still fitting.

Here are their stories…

Whew, there are a lot to choose from! I would say that one of them had to be when I first encountered real overflow. It was during the ‘74 race and I was just coming out of Rohn and headed through the Farewell Burn. 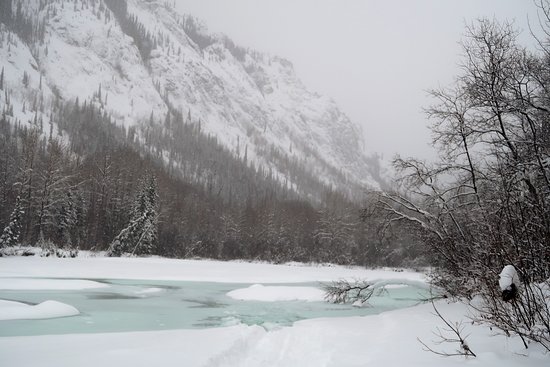 Overflow on the trail

We had to cross a river and so I led the team out onto the river and I noticed we started to sink a little bit. I was getting really nervous because as we got out further we started to sink more and I was wondering to myself if we were going to go all the way through. So I called “haw” to my team and we turned a little bit, but I was in it, to just underneath my kneecaps. The dogs were sinking pretty deep too. Some of my smaller dogs might have been doing the doggy paddle at that point. But we did make it and when we pulled the sled out of the river, I can still picture it now, there were 7 big buffalo waiting there, as they had been introduced in the area.

As we started running again, the buffalo ran with us. They ran in front for a good mile and a half and we just followed right behind. Then they just disappeared, and we kept going for a bit until I found a good place to set up camp and build a fire. At that point we took our time to dry out and warm back up before we were able to head back onto the trail. That took a good part of that day. But that was one of my scariest moments.

As told by Martin Buser:

“The most recent one was probably 2014, when we had a particularly difficult race. We call it the “Hunger Games Race”. What a typical Iditarod throws at you is it throws a challenge or 2 at you, and then the rest of the race is somewhat forgiving. The 2014 Iditarod was not like that. It started out with some of the most difficult trail conditions, so it was really, really difficult from the very get go, and then it got harder and harder. In one of the challenging sections I busted up my right ankle and I had a dislocated finger that got worse and worse. Eventually on the coast, about 36 miles from the finish between two shelter cabins, a mile from Tommy Johnson’s cabin, I can tell you to the yard where I was, I found myself wrapped around a marker tree and was literally unable to continue on because the wind was trying to blow me out into the open ocean and it was glare ice and it was dark. On the last 40 miles, the locals have put trees upside down into the ground and that’s a reflective marker on them, they are called marker trees, which is like your life line down the trail. So at one point I wrapped my 12 dog team and myself around one of those trees and waited out the storm, it was too complex for the dogs and my busted body to keep on going at least until daylight. That was the hope, that the daylight would be better for me to be able to travel, and that happened. So I stayed on that tree. It sounds easy, but it’s like being under a freight train, and the freight train is moving and the sound is deafening from the wind and it’s very intimidating. I contemplated pushing that button blinking at me, but I thought that I got a friend in Nome that would probably risk his life when I push that button, so now thinking about that and I’m thinking if I push the button, then Pat is going to fire up that snow machine at the rescue and the rescuers are going to try to come out in a situation that is virtually impassable. So now that would mean, not only am I in danger, but I’m putting my friends in danger. You are often left with a little PTSD after situations like that. It was really, really, quite difficult. 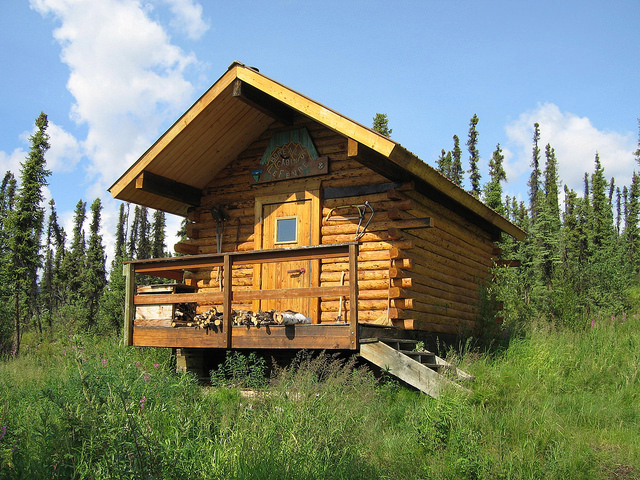 One of the shelter cabins near White Mountain Photo courtesy of BLM. gov

The famous scratch of Jeff King of course, is a good example of the challenges of 2014. Not only was he virtually assured his 5th championship, he had an hour lead on everybody, and the storm said no, and he not only couldn’t travel anymore, he actually was forced to quit less than 30 miles from the finish line. So that’s an example of how difficult it can get and how quickly the race can change from a race endeavor into a survival situation.

There were about 5 or 6 of us strewn along the coast. Jeff was about an hour ahead of me, and he ended up being stuck just like me, and apparently he was a little more worried about losing his life than me. Jeff pushed the button to come get help. He accepted a ride from a passing snowmachiner and he got snow machined into Safety, and that of course eliminated him from the competition. To set the perspective, he was leading the race, he was on an unprecedented championship run. He was going to equal Rick Swenson’s 5 time victory. You have to know Jeff and you have to know the situation, you don’t just pull out of the race lightly. So that tells you how intense it was, and how potentially life threatening it was.”

“I was taking my dogs up to the local mountains and training them. Michael Baker, my old handler and I trucked the dogs up to Hatcher Pass Mountains. We had 20 on the front of a big 4-wheeler, a side-by-side, so it’s like a mini-car basically. It has a steering wheel, 2 seats with a 3rd seat in the middle and a big cargo bed in the back and a roll cage. Looking back on it, I can’t believe that I attempted it because you know, you do stuff you realize that afterwards that was pretty stupid, but thats where you learn from your mistakes. We had been mushing up there quite a bit, we hook up dogs and run up the road. It’s a mountain pass road and they close it down in the Winter time and the early Fall because they don’t want to maintain it, so it’s a good road for us dog mushers to go up there.

We had been going up there quite a bit,  and this one time we wanted to go a little further and there was one switchback on the way down that we had handled beforehand, and we had some aggressive leaders that day, aggressive in the way they would take the turns. So instead of staying on the road, they cut the corner so hard that all the dogs followed them, and they were going downhill, maybe like 120º to the left, so it was significant. There are boulders in between the turn, but the dogs cut the corner so hard that they pulled the side-by-side off the road, and we didn’t have enough power to stay on the road, because they yanked us so hard to the left. The side-by-side started to tip, and then it tipped over onto its side, and all in the same motion, I stepped through where the windshield would be (so there wasn’t a windshield, there weren’t doors on it). Stupid me, I wasnt wearing a seat belt, but that actually saved me, so as it was tipping over, I kind of jumped and walked through where the windshield would normally be, and the side-by-side came to a screeching halt on its side, on the drivers side, and I basically just walked right out through the windshield where it would normally be. Of course we all came to a screeching halt and the 20 dogs were screaming, barking, wanting to go, they had no idea what had just happened. I couldn’t believe what had just happened, and I had no idea how I was going to be strong enough to tip the side by side back onto its tires. So I was kind of shell shocked.

I stopped for a second and I was looking around trying to figure out if I could get a tree or a log or something that would give me leverage. Then it dawned on me that the only power that I had were the sled dogs (because we were still several miles from the truck). So I let all of them go, I just started unclipping them, and then I took the gang line and I hooked it onto the roll cage. I asked the dogs to come back and I extended the gangline, perpendicularly to the side-by-side and I had them now facing a different direction and I gave them the “ready, alright” command. They then pulled the side-by-side back onto the tires and we tipped it [upright] together. So then I undid the dogs, let them all run around again, coiled up the gangline, reattached the gangline, and called all the dogs back. I hooked them up and mushed down the road. I had blown out 2 CV boots, and I had bent one of the “A” arms, and the tires were kind of funky and I broke the roof. So we were going down the road with all the dogs screaming and barking, but the side-by-side was not doing well. 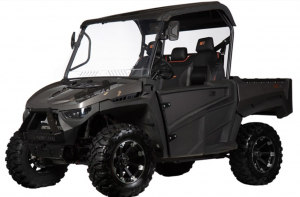 To add salt to the wound, I had borrowed that side-by-side from my cousin, so I had to be an adult, and make the phone call to tell him that I totally crashed his 4 wheeler. He was fine, but looking back on it, I am really glad that I was not injured and… it was just crazy, so that’s probably my scariest mushing moment. I don’t know if I even told my mom and dad that one, but I remember driving back down the hill, the dogs pulling me down the hill, and Michael Baker was sitting there waiting for me because we were running 2 teams. He would run a team, and then I would run a team, and we would work together. I remember driving up and parking the dogs and explaining to him, “man you’re never going to believe what happened”. So yeah, that’s the scariest moment!”

Teachers: To stick with our theme, have your students write about some of their scariest moments! Encourage them to use as much detail as the mushers did in these stories to really “paint a picture with words” for the reader.