Voices of the Volunteers: Jennifer Dowling 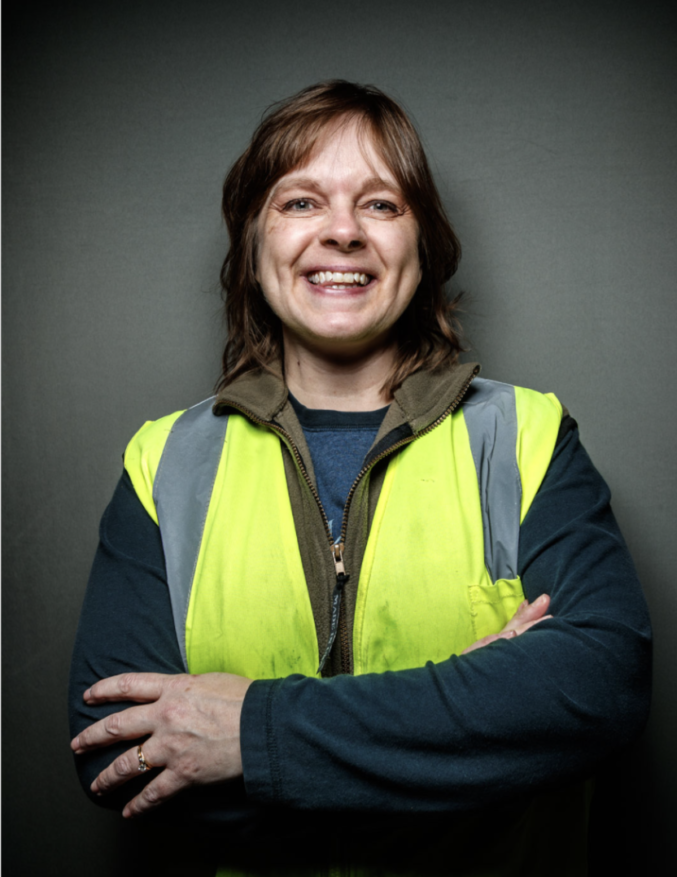 Faces of the Iditarod® Copyright 2019 & 2020 by Jeff Schultz Photography Inc.

Jennifer Dowling has served as the Iditarod information guru since 2015 when she took over the position as Race Comms Coordinator. In this position, she and the COMMS team are responsible for receiving and processing checkpoint times, dog counts, layovers, and all other race information, then publishing it on the Iditarod Insider and website. Data from every checkpoint is sent to the ANC (Anchorage Network Center) where she calls home for the duration of the race. It is an incredibly detail-oriented position and one she takes on every year to help make the race more accessible for viewers around the world to enjoy. Here is a little more about Jennifer in her own words.

“I have lived in Alaska (Texas got too small) since 1996 and work for a geospatial company in Anchorage. In fact, I was hired because I knew one of the volunteers who worked there who let me know they were hiring. It’s a small office and they are very generous to let me work the race. I also have a few co-workers and spouses working Comms as well.”

“I am the Race Comms Coordinator (since 2015 or so) and the Trail Crew Coordinator (since 2019). I recruit, train, and assign volunteers to work in Anchorage and at the checkpoints (in 2019, I had about 130 volunteers, which is probably only 2nd in quantity to the vets/vet techs). Comms’ main mission is to collect and disseminate official musher times and dog counts, including the standings on the Iditarod website. Because it is the comms people at the checkpoints who have ready access to email and phones, Race Comms also makes sure all the internal communication between trail and officials, vets, logistics, etc, is sent where it needs to go. Trail crews set up and run the checkpoint, including team parking, raking, staking, and name-taking (like that? I just made it up. I’ll make sure to add it to my future presentations). My cohort in the Comms world is a guy named Reece Roberts, who has been part of Iditarod as long as I have. He is the lead for all the telecom (cell phones, sat phones, and computers) we use, and there is a lot!” 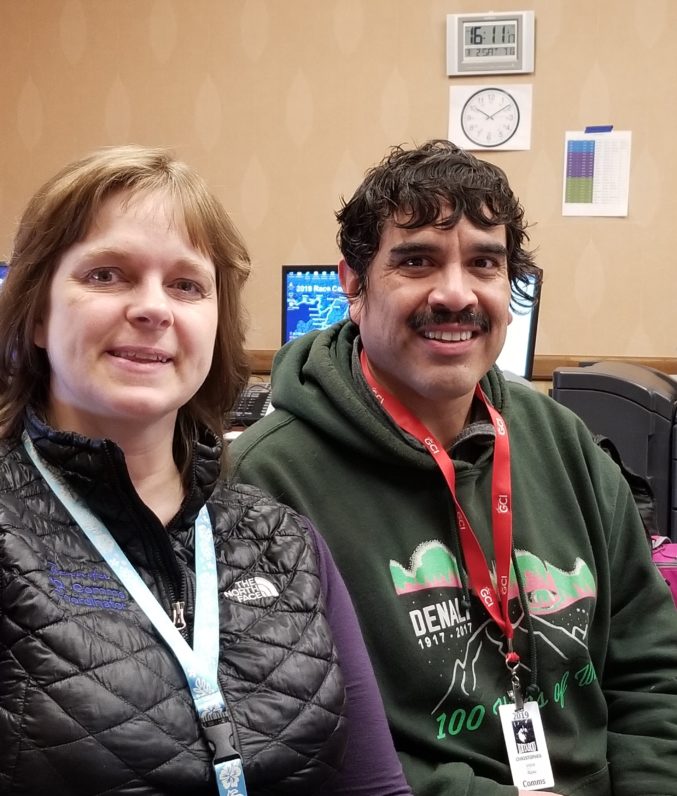 “I saw an ad in the local paper about how the race needed volunteers and as I was between jobs and had a lot of free time, I decided to see where I could help out. That was back in 2009. I signed up for a lot of the behind-the-scenes tasks: straw drop, bag drop, volunteer registration, Race Stats, and Race Comms.

I never did straw drop after that first year, because all that straw was a mess on my sinuses, but I kept returning for the bag drop as it was a couple days of heavy lifting and I could spy some of the mushers as they dropped off their supplies. Later on, when I became the Race Comms Coordinator, I used those two days to evaluate potential trail people as they worked. (Not many people realize just how much physical labor is involved in working at a checkpoint, so I looked for those who remained involved and cheerful as they lugged 50 pound bags around a warehouse all day.) I also looked at how mushers assembled their bags to see what the trail people will be in for during the race. If the bags are lumpy or overweight or tied in such a way to be a challenge to move around during the race, I note that. My favorite mushers are those who pack well!

I also worked volunteer registration for a couple years and enjoyed seeing all the volunteers as they came in. The nice thing about registration is that it’s only a week or so of day shifts, so it’s a good gig for those who don’t have a lot of time to donate.

Race Stats has been combined with Race Comms for the last 6 or so years. That was the group that updated the Standings page on the website using a program that was designed especially for the race (and which, I believe, you got to use when you were in Comms that first night). Once that coordinator retired, we folded that group in since Comms and Stats worked closely with each other and we could combine volunteer shifts.”

“I like knowing that what I (and now those I assign to work in ANC or on the trail) do makes the race run smoothly. Some volunteers like to interact with the mushers or (especially) the dogs, but for me, it’s working through the logistics of getting people in the right place to do their 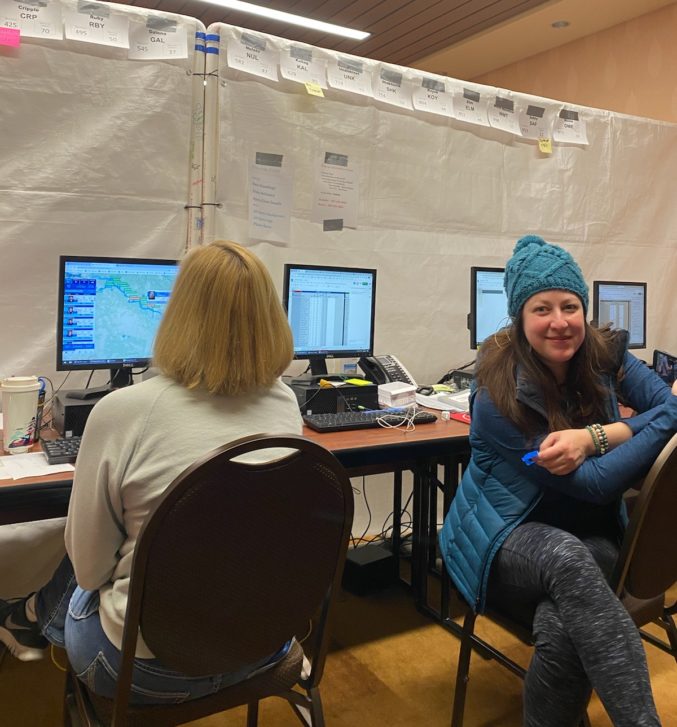 jobs. There is a dedicated group of experienced volunteers which makes my job easier as I can send them to the same place and know that their knowledge and contacts at that checkpoint will save a lot of time in getting the place ready for the mushers and their athletes. I also rely on veteran volunteers working ANC (the Anchorage Network Center) who know the myriad tasks that go on there. Now that I am the coordinator, I like trying to match volunteers with checkpoints. It is a huge logistical puzzle to coordinate travel times with volunteer requests and the needs of a checkpoint. It requires working with my friends in Flights and Registration to ensure the volunteers are ready to go. I also like meeting new volunteers – so many of them are eager to see what they can do and where they can be most useful. There are many jobs during the race and it’s easy to find one that matches your skills and wants.”

“Iditarod is a great race with a lot of meaning for the sport and for the state; I look forward to playing my small part. Every year as Reece and I (and other coordinators) set up and run our groups, we discover ways to improve what we do, such as streamlining pre-race training, getting more volunteers (we always need more volunteers!), editing the website, and creating a race database. After each race, we try to tackle one of those projects. One of these years, we will have improved all we can, and then we will retire!”

What is one of your most memorable moments from the race?

“There are a few. One from last year was the way we set up ANC. Reece and I decided that because of the Covid rules that we would not run ANC shifts from the hotel, but instead would assemble a group of experienced Comms volunteers throughout the US who would work from home and set their own hours. Because we were still cobbling together what we wanted to do even during the training session, we didn’t have grand hopes that we could pull it off; we anticipated that there would be many overnight hours where no one would collect musher times. I prepared the other coordinators that the stats information and the website updates may be delayed. When we solicited for help, however, we found we had enough people that we could assign small groups to each checkpoint. They organized themselves into shifts, even the overnight hours, and interacted directly with their checkpoint counterparts. With all the difficulties those on the trail endured this year, they loved having a dedicated group to watch over them and the ANC teams were responsive to “their” checkpoints in ways they might not have been on a 6-hour hotel shift.” 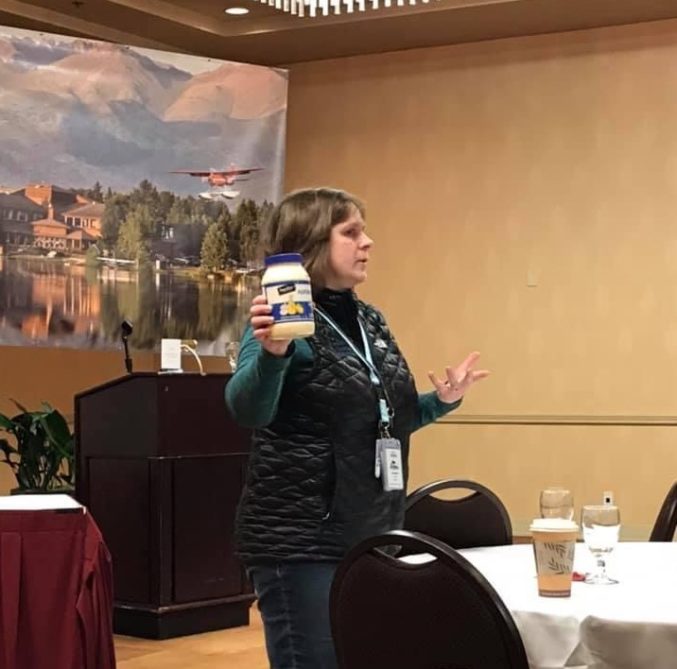 I had the opportunity to hear Jennifer speak in 2020, and during her presentation I learned an interesting fact about the COMMS department that speaks to the interdepartmental relationships and co-workings of the various branches of the Iditarod. This may sound odd, but one of the things she talked about was the importance of mayonnaise during the race. Apparently this condiment is shipped out with the COMMS gear and supplies because frozen mayo can stay good for several months! It will begin to separate, but can be mixed back together without losing its palatability. However, mayonnaise does not taste good if it freezes after it is mixed with other ingredients, and for that reason, food must be prepared on the trail instead of beforehand. Therefore, the logistics, COMMS, and food teams all work together to ensure that it is available at each of the checkpoints. This is just one small (and interesting example) of how the various departments all work together to make sure that the entire race runs  as seamlessly as possible.

Teachers: While working in the COMMS department, the most important thing is obviously clear communication! So check out these lessons about integrating the Iditarod into various English Language Arts lessons from our 2 most recent Teachers on the Trail™.

Iditarod Lesson on the Parts of Speech – for middle school students