Tails from the Trail- Dog of the Month- Scabs!

Happy New Year!! This month Brett Bruggeman shares about his special dog Scabs.  Brett mushed in his first Iditarod in 2018, this year will be his third Iditarod. Brett and his wife Suzette own Skinny Leg Sled Dogs, you can read more stories about their dogs and kennel by heading to the Skinny Leg Sled Dog Facebook page. 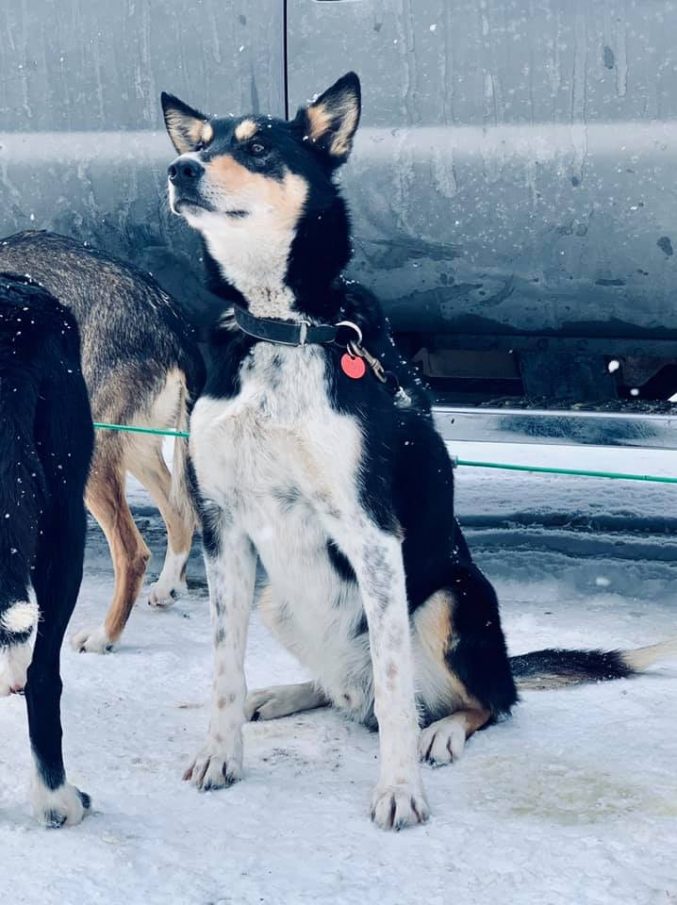 Brett bought Scabs when he was about a year old because of his bloodlines. Scabs, a very shy, skittish dog, got his name because he was a fighter, so he always had scabs. After a few months with Scabs, Brett didn’t think he was going to make it as a sled dog because every time Brett worked with him, Scabs would cower and bare his teeth at him or hide under the trailer. Brett gained a few scabs of his own.

As a last-ditch effort, Brett did some one-on-one obedience training with him. For a month, out of the dog yard, he taught Scabs to sit and heel on a lead. Learning these commands seemed to give Scabs confidence. Now the dog knew what was expected of him and knew that he could do it. Mostly, he learned to trust a person.

Once Scabs was no longer confused as to what was expected of him, he quit lashing out. He learned that hiding and biting wasn’t the best choice for him. The confidence he gained in learning the simple obedience commands soon spilled over into the rest of his training, and his true colors as a talented sled dog were revealed.

Scabs only got better from there. He kept getting moved up further and further on the gangline until, at four years old, he became one of Brett’s main leaders. Along with Browning and Plugger, Scabs is the cornerstone of the team. Three years ago, when elite Iditarod-competitor and friend, Jesse Royer, asked Brett if he had a suitable dog she could borrow for her Iditarod team, it was Scabs he offered to her. Scabs finished strong, and Jesse used him again the following year.

Scabs is an incredibly smart lead dog. Last year during a big blizzard on the way from Ophir to Iditarod, the trail was nearly impossible to see for both man and dog. Brett was getting frustrated at Scabs, who was leading, because he kept jumping off the groomed trail and leading the team into the deep snow. Brett couldn’t figure out why. After a few more detours into drifts, he realized that Scabs was catching the reflection of Brett’s powerful headlamp in the reflectors on the old historic Iditarod trail markers, which are permanent fixtures in the landscape, instead of the actual trail markers put up specifically for that year’s race. Scabs was simply keying off the wrong trail markers. So Brett dimmed his headlamp so that it only showed a few feet in front of the team, and Scabs was able to connect the dots of the correct trail markers and get the team safely to the next checkpoint.

When Brett ran his inaugural Iditarod, Scabs was key to getting him through– both emotionally and physically. That extra one-on-one time they spent together in the beginning created a special bond. Scabs is Brett’s best buddy.”

You can follow Brett Bruggeman and his amazing team in the 2020 Iditarod on Iditarod.com

Teachers-   Brett’s persistence and kindness created a bond between him and Scabs that is truly special. As we head back to school, what will your students’ resolutions be? Perhaps persistence to overcome challenges? During a morning meeting have your students use this template to make their New Year’s Resolutions.