“It’s the friends we meet along life’s road who help us appreciate the journey.” – Unknown 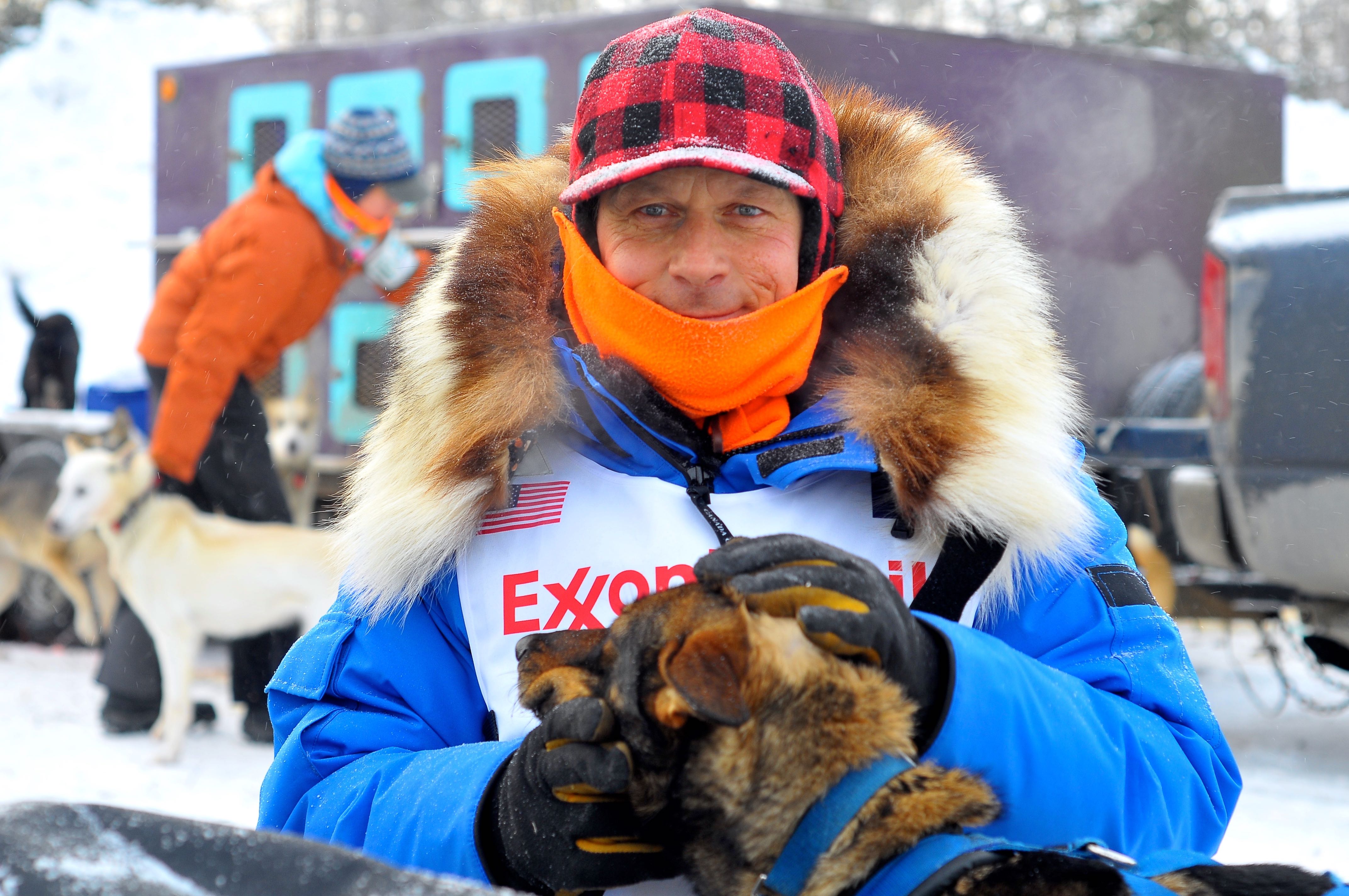 Martin Buser at the Restart in Fairbanks

“Don’t love something that can’t love you back.” – Martin Buser. Truer words could not have been expressed during a time of tragedy in lives of so many in Willow, Alaska.

I’ve been spending the last week at Vern Halter’s Dream a Dream Dog Farm (mile 64) helping out before the annual Iditarod Summer Teacher Camp. On an unusually hot Sunday afternoon my experience at Vern’s took a huge turn. As Cindy, Lynda, and I were outside preparing the dogs for the tour, Vern was inside giving his presentation. The bus driver for the tour group came over to Lynda and asked her what mile marker she lived near because a forest fire just broke out at mile marker 77. Lynda lives near mile 74, so she took off to check on her home, dogs, and cats. As we drove up the highway to the tour halfway point to meet Vern and the dogs to water them, we could see the smoke intensifying in the distance. The tour finished as the fire expanded from 200 acres to 1000 acres in a matter of hours.

After the tour, the preparation began. A few neighbors and friends began transporting their dogs to Vern’s kennel as they were being evacuated from their homes. Including Vern’s dogs there were close to 80 dogs on the property. The fire continued to spread south and even leapt across the highway.

In a matter of hours word had spread across social media and throughout the mushing community. Calls for help and support were being cast out on Facebook. People in the small community of Willow had begun loading up dogs, horses, chickens, and personal effects; anything they could grab and evacuated their homes. The fire strengthened and continued to spread.

At Vern’s we began to prepare for the worst. We started loading up dog food, necklines, water, harnesses, ganglines, dog dishes; as many supplies that would fit in our vehicles. We drove the 4-wheelers about 10 miles south to Houston, loaded with even more dog food. We waited. As we waited the power flickered on and off a few times and at one point staying off for about 20-minutes. We waited. 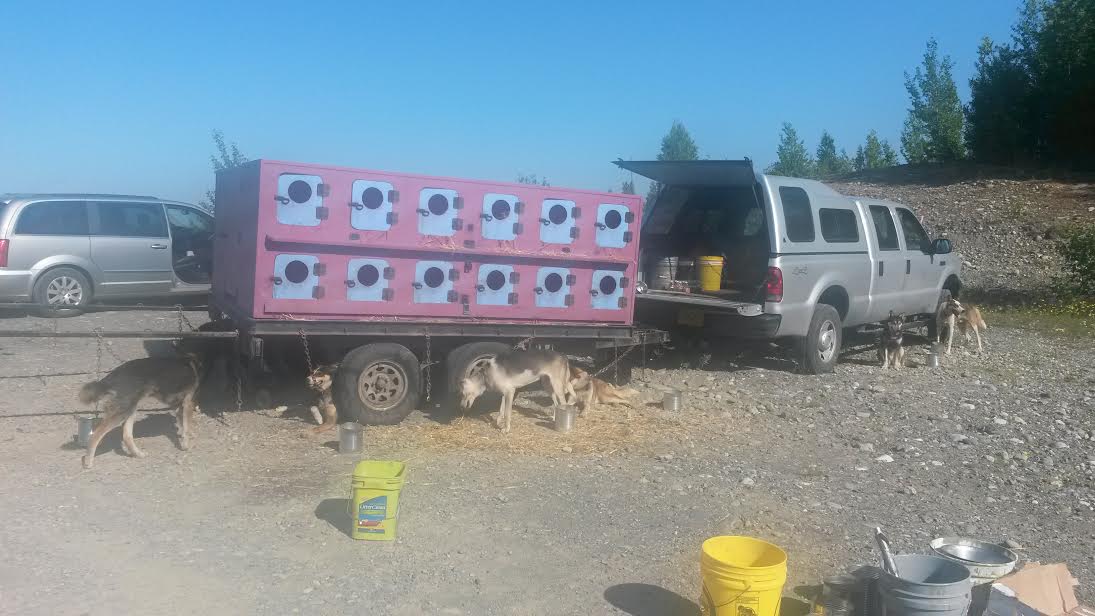 Some of Vern’s dogs at Happy Trails Kennel

It was now our time to evacuate. We began moving more vehicles down to Houston. Since there was close to 80 dogs at Vern’s, it was necessary to call for additional trucks. Trucks were sent from Martin Buser and Dee Dee Jonrowe to help load up dogs and evacuate. Approximately 80 dogs, including Vern’s racing dogs, house pets, 10-week old puppies, 3 friends’ dogs, were now loaded up and on their way to Martin Buser’s Happy Trails Kennel. Buser graciously offered up his kennel to anyone. When we arrived at Buser’s, there were close to 400 dogs spread out around the kennel. We immediately began arranging the dogs around the property sheltering them from direct sunlight. Our number one priority was the dogs and their care. We made sure they had water and enough room to lie down and be comfortable. The puppies took refuge in their very own large puppy pen complete with a couple of doghouses.

If I ever had any doubt that people are genuinely good, those thoughts were laid to rest amidst this heartbreaking disaster. Martin Buser, who ironically battled a fire at his home in Big Lake back in 1996, opened his kennel, visitor center, Bed and Breakfast, offered dog food, people food; any accommodation necessary, to anyone that needed help. When we arrived there was countless water dishes already filled and ready to serve up to the dogs, chains, lines, and doghouses available and ready to hook up dogs. During my 3-day stay at the Buser’s kennel I gained new friends and gained a great deal of faith in humanity. So many people stopped by at all hours of the day to drop off donations of dog food, kennels, water, human food, meals, clothes, and money. Some even stopped by to help volunteer to clean up poop, dish up water, or just lend a helping hand.

A couple of the mushers that were staying at Martin’s place were Dee Dee Jonrowe and Justin and Jaimee High. Dee Dee, her husband, and the Highs are neighbors off mile 73. Dee Dee and her husband lost their property. The only thing left standing was a building that dog handlers sometimes stay in. I had an opportunity to see her place first-hand as we headed out to help put out hot spots. When we arrived we heard great news of her chickens surviving. We could still feel the intense heat of the fire as we sauntered around her property. Smoke billowed from a shipping container filled with dog food. The burnout of multiple vehicles left trails of molten aluminum from the motors and rims. Dee Dee’s father’s classic 1953 automobile, which was a gift to her as it was her birth year, was resting within the skeleton of a burned up trailer. It looked like a war-zone. 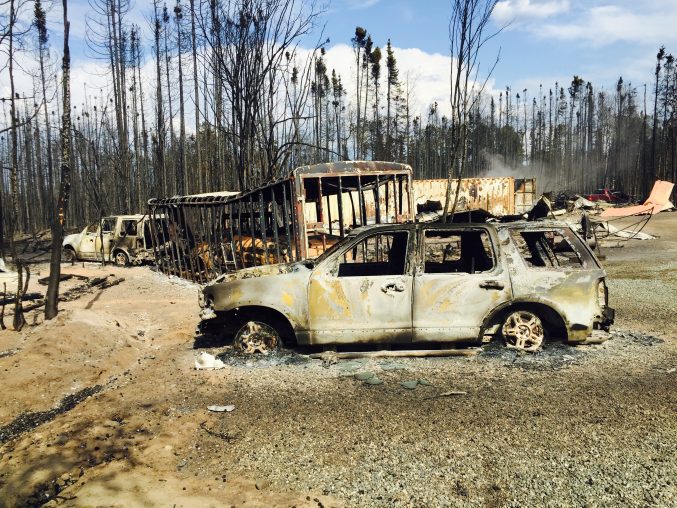 1953 automobile behind the car 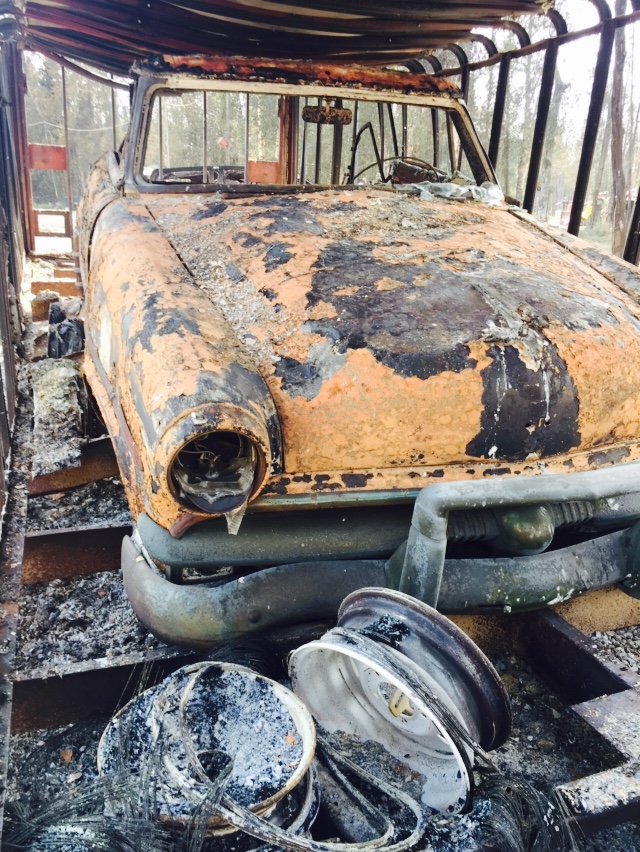 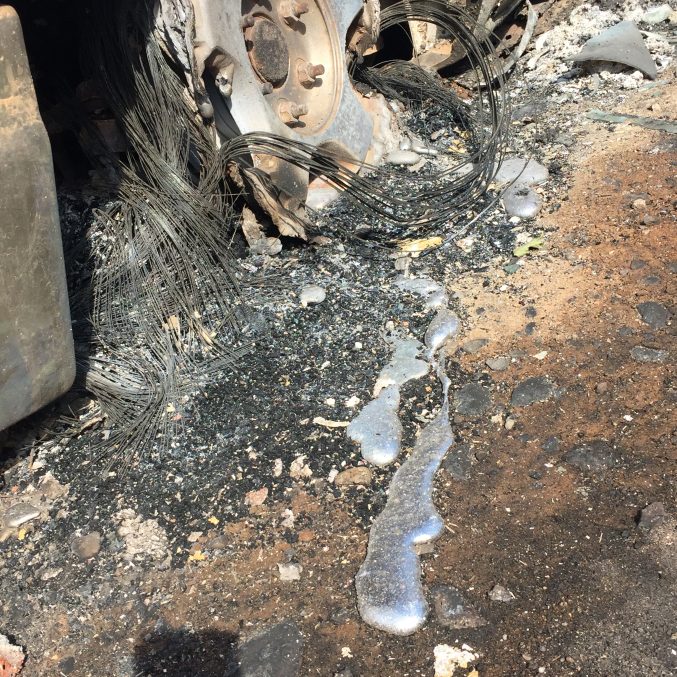 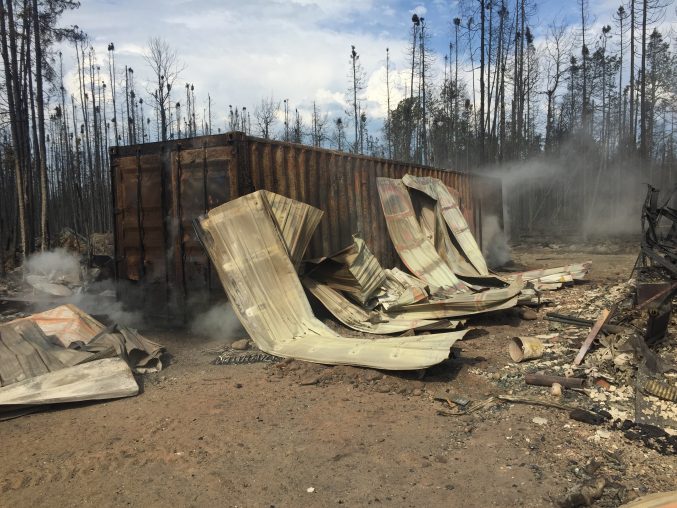 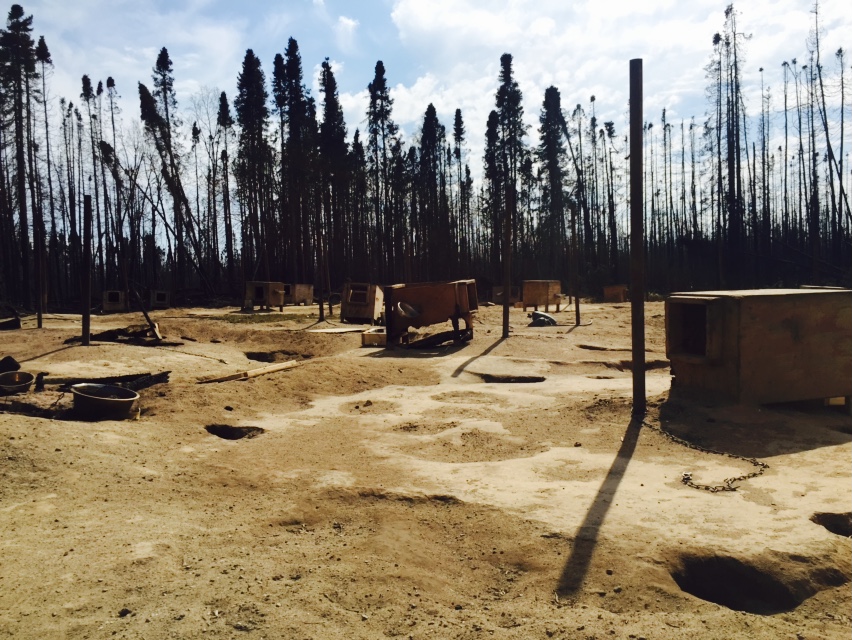 We stopped at Justin and Jaimee’s property as well. Six months ago Justin and Jaimee had already lost their home to a fire. They were in the process of rebuilding on the same exact property while living in a shipping container that housed all of their possessions. Again, destruction hit the High’s; they lost everything. The home was nothing but a smoking hole in the ground. Scorched trees surrounded relatively untouched doghouses. Directly next to the burned up temporary home of the shipping container was a table holding dishes that had been washed the morning of the fire, undamaged. It was a heartbreaking scene to witness.

“Don’t love something that can’t love you back.” Many people lost their entire life possessions. I know it’s hard to hear, but you can replace possessions, you can’t replace lives. All of these people have their dogs and their lives. The possessions may be gone, but you still have the memories and the stories that went along with the belongings. As I was talking with a friend last week we talked about the importance of one day at a time. This statement is perfect for those living through this tragedy.

I never imagined this would be part of my experience, but I feel privileged to have been able to help the many people in need and witness so much selflessness. Fierce competitors during the Iditarod in March, compassionate support teams in time of need.

We moved all the dogs and puppies back to Vern’s as of Wednesday morning (June 17). Everyone is happy and comfortable in their own doghouses.