Third time’s a charm. Cindy Abbott officially put the finishing touches on the 2015 Iditarod last night when she extinguished the flame in the willow lantern. The crowd witnessing the monumental event was similar in size as it was last Wednesday morning for the champion. A reporter asked Cindy when she knew she was going to finish this year. Her response was perfect, “right at the start.”

I had my eye on the tracker all day following Cindy. Over the last two years I have become friends with Cindy and my class has been working with her and her quest to finish the Iditarod. As I was kneeling in front of the stage at the Finisher’s Banquet in Nome snapping photos, I heard my name. Vern Halter, Cindy’s trainer, and her husband, Larry, were going to be leaving the banquet; Cindy just went through Safety. We stopped at the hotel to pick up the meat snacks for the dogs and headed out to find Cindy. Vern drove us out to Cape Nome where we waited. Vern and I hiked about halfway up to greet her and the dogs. Suddenly, out of nowhere, we saw her head. We were probably the last thing she thought she would see when coming over the cape. I took some pictures and we were off. We continued to follow her and stop along the way for more videos and photos. 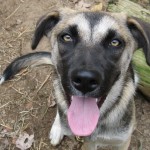 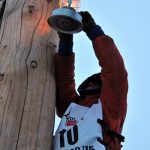 As we were waiting for her to come off the beach, the siren sounded one last time in Nome. The police cars were waiting to escort one last musher to the Burled Arch. One last time we jumped into the truck and sped to the chute. A little black dog tried to steal the limelight from Cindy as she was running down Front Street. He ran up the chute as the crowd cheered him on and race officials tried to snatch him up. Then it was Cindy’s turn. She and the dogs came through the chute towards the Burled Arch with the biggest smiles on their faces. As Cindy was officially signing off the trail, the dogs were given a celebratory snack. 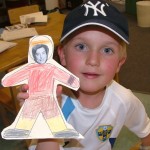 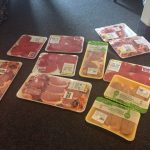 The Red Lantern is the award given to the last musher to cross the Burled Arch in Nome. It stands for perseverance, hard work, determination, the will to not give up, and so much more. It is an honor to receive. It does not matter what place you finish in this incredible race; what matters is that you finish. The Red Lantern demonstrates to athletes across the world to not give up. I think Cindy was the perfect musher to earn the Red Lantern. It signifies her entire journey to the Burled Arch. She has persevered through many bumps in the road, but none  of them stopped her. Cindy has been fighting a rare disease for many years, Wegener’s Granulomatosis. One of the effects of this disease is it has left her blind in one eye and partially blind in her second. She has a very difficult time seeing, especially in certain types of light. Imagine running close to 1000 miles in pure white snow that blends in with the sky, struggling to see. While fighting this disease, Cindy also summited Mount Everest in 2010. What would she do next? The Iditarod.

Cindy first attempted the Iditarod in 2013. She was forced to scratch in Kaltag after running over 600 miles on a broken pelvis. In 2014 she scratched in Rohn after injuring her shoulder. Her dream to finish the Iditarod would not be halted. She set forth to run in the Last Great Race one more time in 2015. Nothing would stop her from achieving her goal. Nothing did stop her. Cindy encountered below -60 degree temperatures, frost bit toes, being secluded out on the trail with no other mushers, and she persevered and crossed the Burled Arch.

A true inspiration to athletes around. The perfect representative for the Red Lantern. She never let her disease get in the way of any of her dreams. She was determined, she was driven, she was tough, she was tenacious, and she was destined to be in Nome. On March 23, 2015, at 9:19 p.m. Cindy Abbott became the first woman to both summit Mount Everest and finish the Iditarod. What will we see her doing next? Whatever she does, she will do it well. 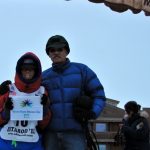 Cindy and her husband, Larry