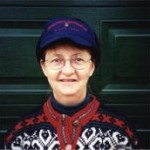 Pam Flowers is a small quiet woman who considers herself a loner. Her idea of fun is to travel with her dogs in lonely desolate places. This may or may not sound like fun to you but Pam’s adventures captivate the interests of adults and children alike.

After graduating from college, Pam held a good job as a respiratory therapist. She lived in a big city and worked in a big hospital. Pam was unhappy and dreamed of spending time in snow covered isolated places. She left her job and moved to Alaska intending to raise dogs and travel solo into the hinterlands.

Pam’s most extensive and dangerous expedition was traveling solo from Barrow, Alaska to Repulse Bay in Nunavut Territory, Canada, as distance of 2,500 miles along the entire Arctic Coast of Alaska and Canada. Pam left Barrow with eight dogs in February of 1993. After many distressing incidents including polar bears, melting sea ice and a lost dog, Pam and the eight dogs reached Repulse Bay eleven months later. This was the first and longest solo dog sled trek by a woman in recorded history. You can read a detailed account of the adventure in Pam’s book, Alone Across the Arctic – One Woman’s Epic Journey by Dog Team.

Pam’s most recent expedition was a through hike on the 2,175-mile Appalachian Trail with one-year-old Ellie, her black lab. The trek took the better part of the 2008-2009 school year. Pam is currently writing a book called Ellie’s Long Walk to tell of their experiences along the trail. I can’t wait to get a copy for our Just Guts Library. 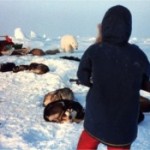 Pam has traveled to the Magnetic North Pole by dog sled on two occasions, one being the first documented solo journey by a woman over the 325-mile route from Resolute Bay to the Pole. It must have been exciting to stand at the pole looking at a compass that was pointing straight down. Pam has run the Iditarod. She’s logged thousands of miles between Kotzebue and Kaktovik and on the North Slope solo with her dogs. Pam attempted a solo dog sled trek to the geographic North Pole but early break up of the sea ice put an end to all expeditions to the pole that year.

Pam has amazing skill when it comes to training dogs. She has two rules in her kennel, no fighting and no stealing another dog’s food – if you want more food I’ll give you more but you must not steal. Pam spends a lot of time, energy and effort in making sure that her dogs understand what she expects of them. Pam had her work cut out for her when training little Ellie for the Appalachian through hike. As a puppy, Ellie had enough energy for half a dozen dogs. She tried to please Pam but a good share of the time she couldn’t resist fun and games, especially with other dogs. When Ellie saw another dog on a training run, she’d charge up to the dog hoping to play. One day Ellie’s actions caught Pam off guard and she was knocked face first into the ground ending up with a wrist injury, black eyes and broken glasses. Would Ellie ever learn to behave for the long through hike? Lesser trainers would have labeled the dog a delinquent and given up on her but Pam sought a solution for the problem. For several days, she withheld affection from Ellie, giving her food and water but rarely speaking to her except in a very stern voice. Ellie began to get the picture. This was the turning point for her it was hard but from then on she did her very best to obey Pam to earn her approval, friendship and trust.

Pam has authored two other must read books about her dogs, Douggie and Anna. In Douggie – Sled Dog Hero you’ll read the story of a playful mischievous pup that, under Pam’s tutoring turned into a stellar lead dog. Big Enough Anna is the story of a little dog that was determined to succeed and became one of eight dogs to travel the entire Arctic Coast. You can learn more about Pam’s adventures and order books at www.pamflowers.com.

Thanks to my friend Pam who gave us these pictures.  Stay tuned for our next story about idols.  Try to decide how an idol is different than a hero.  In the mean time, take Pam’s advice – look at a problem as a solution waiting to happen.