Serum Run, the Rest of the Story

Back in January of 1925 there seemed to be an outbreak of tonsillitis in Nome – except tonsillitis is rarely fatal. Nome’s sick children were dying. With more research into the symptoms of the children, Dr. Curtis Welch realized Nome was on the brink of an epidemic that could take as many lives as the influenza of 1918! What he thought and hoped was only tonsillitis was deadly diphtheria. Nome needed anti-toxin to cure those who were sick and prevent the disease from spreading – sooner rather than later.

Dr. Welch, as a preventive measure, ordered serum to be delivered in late 1924 on the last supply ship into Nome before the Bering Sea froze over for the winter. Somehow, the order wasn’t filled and now Nome was in trouble – BIG TROUBLE.

Besides comforting the families and caring for the sick children, there were two major tasks at hand. Number one was to FIND serum and number two was to quickly TRANSPORT it to Nome. While the search was on, many people came together to think up a plan for delivering the medicine to Nome. This is where the rest of the story comes in. 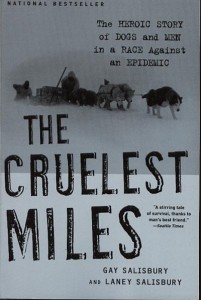 After a large quantity of serum was found in Anchorage the first part of the delivery plan was a given. The lifesaving medicine could travel north to Nenana by train where it would be 674 miles east of Nome. Options from Nenana to Nome were limited. The people who traveled and knew the route were the postmen. During the winter, they drove their powerful dog teams from Nenana to Nome on a regular basis. With deliveries and rest stops, the route took three to four weeks. The serum had to get there faster!

The next thought was an express delivery. A strong fast dog team with an experienced driver would leave Nenana with the serum. Halfway to Nome, he would hand the serum off to another experienced driver with a fresh team who would carry the precious cargo the rest of the distance. Surely this would be faster than the traditional mail route.

The mayor of Nome had another idea. In February of 1924, an airplane made the first winter flight in Alaska carrying mail from Fairbanks to McGrath, a distance of 260 miles. Would it be at all possible to fly the serum to Nome? Travel at 60 miles per hour through the air would be faster than dog team. For the children in Nome, speed was very important!

There were pilots willing to fly the dangerous rescue mission. There were three planes in Fairbanks all stored for the winter and badly in need of repair. In their book, The Cruelest Miles, the Salisbury cousins describe the condition of the three planes, “the wings had been dismantled from the dilapidated airships. The once tight fabric covering the wings and fuselage was weak from all the rough landings as well as the wind and rain. Dirt and oil caked the engine and prop. Wires for the rudders and elevators hung from the sides of the fuselage.” Even in such disrepair, the pilots and mechanics thought one of the planes could be ready to go Nome in just three days, a flight they thought would take no more than 6-hours.

At the same time, another plan was taking shape. Twenty drivers and their teams would be ready and waiting at roadhouses along the trail. When the serum reached the roadhouse, it would be warmed inside then the new dog team and driver would head to the next exchange.

Of course the aviation fans were certain their plan was the answer to saving the children of Nome. But not everyone was convinced that it was possible to fly that distance in bitterly cold weather and blizzard conditions. If the plane went down, the precious serum would be lost and the pilot would likely die. Get the serum to Nome fast or get the serum to Nome for sure – that was the decision left for the Governor of Alaska, Scott Bone.

The plane chosen for the flight to Nome had an open cockpit. The pilot would be exposed to frigid temperatures of minus 50 degrees and surely not survive. At that time of year daylight was limited, there weren’t lights on the ground to guide the way nor did the plane have navigational equipment except for a magnetic compass. Anti-freeze hadn’t been invented so the engine’s water-cooling system would most certainly freeze up. Snow and ice could clog the engine and ice could form on the exterior of the plane. As dangerous as it would be on the ground for the drivers and dog teams, it was even more dangerous and uncertain in the air. As we know, Governor Bone awarded the job of saving the children of Nome to twenty teams of dogs and their drivers.

Still the aviation enthusiasts felt they could help if not by delivering the first batch of serum, then by delivering a portion of the second batch. They prepared one of the three planes for flight, the wings were attached, the motor was tuned up, skies were attached, supplies were loaded and the pilots were dressed in many layers of warm clothing. They rolled it out of the hanger, spun the prop and the engine raced into action and kept on racing. Every attempt to idle it down failed due to a radiator problem. The flight was scratched. On the next attempt, the radiator froze and again the flight was scratched. On the third attempt the plane didn’t get off the ground either and efforts to deliver any serum to Nome by air were abandoned. Governor Bone had made the correct decision.

The information I’ve shared with you in this story comes from The Cruelest Miles written by cousins, Gay and Laney Salisbury. It’s an astounding 250 page, fact filled, can’t put it down, adventure thriller. While you know the outcome of the story, you’ll enjoy and really appreciate reading the “rest of the story.”