Neither Rain, Sleet, Nor Snow The Mail Must Go

“Always striving to find ways to get the trail recognized, another idea was hatched at one of the many meetings.  The Iditarod Trail was a mail trail, so why not have each musher carry mail?  An arrangement was made with the U.S. Postal Service to carry cachets, packets of letters, over the Iditarod to Nome.  Joe [Redington, Sr.] asked his artist friend, Bill Divine, if he would design an Iditarod Trail Logo for the envelopes.  These would be postmarked in Anchorage and Nome and used as a fund-raising project.

At a prerace meeting this idea was presented to the mushers.  Surprisingly, it was met with some resistance.  There was already enough to do.  Carrying mail was too much to ask.  Joe did not react, he responded in a good way, and came up with a solution – ‘I’ll carry yours,’ was all he said.

‘He was one of a kind,’ said Norman.  ‘Joe had such a unique, easy way of looking at things.’

His positive attitude turned the whole negative thought around.  To have the U.S. Postal Service support the Iditarod Race added credibility, recognition, and needed funds.  And Devine’s logo became the official Iditarod logo.”

From:  Champion of Alaska Huskies by: Katie Mangelsdorf

One summer I had the opportunity to be a member of the Teach it Forward Program with the Smithsonian American History Museum.  During the program, we learned strategies for teaching with objects as a way to get kids to relate to history.  Our challenge was to choose an object in the museum’s collection and develop a lesson around it.  I was really excited to join this program – and I had visions of getting to see and work with the Libby Riddles sled, and DeeDee Jonrowe’s humanitarian award and coat. I know that these objects are a part of the Smithsonian’s collection, as I had a chance to meet Jane Rogers, the curator of sports, one winter when she came to the Iditarod Conference for Educators to learn about the race and gather objects for an upcoming display.   You can read more about Jane and the upcoming exhibit by clicking here.

This second link includes an activity that challenges the students to decide what objects they would place in the Smithsonian’s exhibit. Click here.

But, it turns out the Iditarod objects are still in storage and not ready for display yet. I was disappointed, but in a way, it turned out to be a really cool disappointment because it forced me to get more creative and I discovered something really cool!

It turns out that the Smithsonian has a second sled it its collection, an Alaskan mail sled, which is housed in the National Postal Museum. 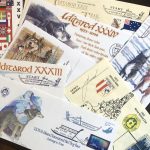 My next challenge was to tie that sled in to the Iditarod, which I was able to do.  The Iditarod Trail was originally a mail trail and the modern mushers honor that history by carrying mail cachets down the trail every year.

So I was able to use several objects in the Smithsonian’s collection, a sled, some photographs, and stamps as the basis for an inquiry based lesson.  It was a fascinating process. I learned a lot thanks to authors Katie Mangelsdorf and Helen Hegener who graciously allowed me to use portions of their books with this lesson.