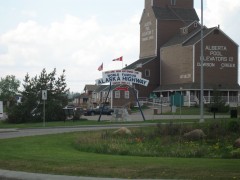 I can’t believe I’m actually standing at mile 0.0 of the infamous Alaska Highway! It’s my black lab friend Ellie and me traveling with Ellie’s human Pam Flowers. Oh this is so exciting, I can hardly keep from jumping and barking! From my last story you know the history of this storied road. It was built to connect the air bases between Edmonton and Fairbanks as a supply route during WWII. Since 1949 when the roadway opened to the public, thousands drive the highway every year. Now days, it’s in much better condition than it was way back then.

We’ve planned our trip using the Alaska Milepost. This is a large book with lots of pictures and stories about people and places plus maps and suggestions about what to do and where to stop along all the roads in Alaska including the Canadian portion of the Alcan (Alaska) Highway. I could sit in or on my house and spend hours dreaming of places to go and things to see with this book in my paws.

There’s a lot more to Dawson Creek than being Mile Zero of the route to Alaska. The town was named after Dawson Creek. Way back in 1879 a team of surveyors led by George Mercer Dawson was out in the Peace River Country measuring land for the purpose of mapping. Dawson’s name was given to one of the creeks the crew found. By the time 1920 rolled around, many settlers were farming the area. Rail service reached the bustling regional business center in 1930. After the bombing of Pearl Harbor in 1941, thousands of troops from the Army Corp of Engineers were shipped to Dawson Creek to construct the supply road linking the lower 48 states to Alaska.

Farming has been an important industry for Dawson Creek since the first settlers followed the surveyors to the plains just east of the Canadian Rockies. Livestock ranchers and grain farmers are challenged by the climate. During the summer it’s windy and dry. In the winter, the weather changes to cold and dry. Nineteen inches of precipitation is all that’s expected in a year and 3 of that comes in July. It’s been as cold as minus 57 degrees and as hot as 94 degrees. There are about 11,600 people that call Dawson Creek home. Besides agriculture, folks make a living in retail, tourism and petroleum – both gas and oil.

Are you curious about how your weather compares to the weather at Mile Zero? The coldest reading in Wisconsin is 55 degrees below zero and the hottest is 114! Wisconsin gets about 33 inches of precipitation in a year. For Ellie in Alaska, it’s gotten down to 80 below and up to 100 above with 22 inches of precipitation. What are the facts and figures for where you live?

One more thing about Dawson Creek. A long time ago there were five working grain elevators standing in the area. These were large prominent structures built to collect grain from the area and load it on trains to be shipped to buyers around the world. Only one elevator remains from the historic Elevator Row, the one standing at Mile Zero. The historic landmark has been converted to an art gallery. Now-a-days grain is distributed through modern and efficient elevators.

Well, there you have a glimpse of Dawson Creek according to Ellie and Sanka. Stay tuned for Part III of the Trail to Alaska. We’ve got some great pictures of traveling through the majestic and scenic Canadian Rockies.