Origin of the Iditarod: How did it all begin?

In History, Origin of the Iditarod, Social Studies, Teach & Learn 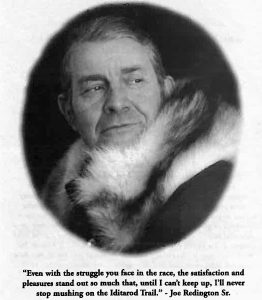 *There’s a big myth and it’s time to bust it!  You can help!

Myth: Iditarod is run each year to commemorate the Serum Run.

Truth: Although that event is an extremely important event in the history of Alaska, the fact is, the founders of the race did not take the Serum Run into account when creating the race.

For Joe Redington, Sr., often remembered as the “Father of the Iditarod” and his two closest founder partners, Tom Johnson and Gleo Huyck. both mushers and teachers, there were two most important reasons for the Iditarod Sled Dog Race.  He is quoted in Nan Elliot’s book, I’d Swap my Old Skidoo for You, “When I went out to the villages (in the 1950’s) where there were beautiful dogs once, a snow machine was sitting in front of a house and no dogs.  It wasn’t good.  I didn’t like that  I’ve seen snow machines break down and fellows freeze to death out there in the wilderness.  But dogs will always keep you warm and they’ll always get you there.”  He was determined to bring back the sled dog to Alaska and to get the Iditarod Trail declared as a National Historic Trail.

Those two reasons were realized and stand today as a testimony to the origin of the race.

Providing this very important information to students is key to correcting false information about the Iditarod.

More information and a great resource for you to use:

Joe said to me a number of times that he would like people to know the real reason why he started the Iditarod Race.  He wanted to preserve the Iditarod Trail, the old freight and mail trail from Seward to Nome that brought gold out of the interior of Alaska.  He also wanted to save the Alaskan husky and the sled dog culture that had always been such an important part of Alaska’s history.  He said he tried and tried for years to get it straight with the media, but was never successful—mainly because the Diphtheria Epidemic and Serum Run was such a dramatic event and a real attention getter.  Maybe, Joe said, this book you are writing will help clear up history.

The 1967 Centennial Race was a race held over two days with two 28-mile heats running along nine miles of the original Iditarod Trail.  “They also were going to honor Leonhard Seppala, known as one of the world’s greatest dog mushers and a man Joe and Vi greatly admired.”  (Champion of Alaskan Huskies, p. 152)  Seppala passed away before the Centennial Race, but his wife, Connie, came with Seppala’s ashes.  They were spread along the Iditarod Trail near Redington’s property.

“It’s been said that Seppala represented all mushers and this Centennial Race was patterned after the All-Alaska Sweepstakes he raced in Nome in the early 1900’s.  To honor Seppala’s memory and his achievements, the race was to be called the Iditarod Trail Seppala Memorial Centennial Race. “ (Ibid, p. 153)

“Seppala was also a champion dog musher.  He won forty-three silver trophies and bowls, and eight gold medals.  For three years between 1915 and 1917, he won the All-Alaska Sweepstakes between Nome and Candle.  Seppala lived in Alaska for forty-seven years, and the records show that he had mushed his dogs about 250,000 miles.”  (ibid, p. 153)

After the Centennial sprint race in 1967, two more races were held along that route but then the race died.  However, Joe Redington was always thinking BIG. His commitment from the 1950’s to get the Iditarod Trail recognized nationally, in addition to becoming increasingly concerned about the decline in dog mushing in the villages, was dreaming up a new and bigger idea for a race to bring to the attention of the public the historic Iditarod Trail.  The idea was first to race to Iditarod. However, no one knew where Iditarod was. Then Nome came into the conversation. Everyone knew of Nome—the gold rush, the All-alaska Sweepstakes Races, and its famous dog mushers, like Leonhard Seppala. The result of Joe’s dream to bring attention to the Iditarod Trail and preserve the Alaskan husky and dog mushing came true in 1973.

“The number one sled was an honorary position set aside in remembrance of Leonhard Seppala’s achievements as a dog musher.”  (Ibid, p. 173) For seven years they would honor Seppala and identify him as one of the men who in 1925 raced to Nome with the diphtheria serum.  (Seppala mushed his dogs 340 miles, 220 of those just getting to the serum. Togo was his leader, whose instincts took Seppala’s team through stormy weather and a 30 miles short cut across Norton Sound.  The ice broke up soon after they got back on the land heading back to Nome. Then Gunnar Kaasan, using 13 of Seppala’s “rejected dogs” including Balto, brought in the serum.)

The route the Serum Run took was over a centuries old northern route across Alaska, which was used by the indigenous people, and later trappers and gold seekers.  The Alaska Railroad took the serum to Nenana where it was then transferred to dog team to travel up the Tanana River to the Yukon River Trail [the Yukon River] to Kaltag, across the Kaltag Portage to Unalakleet, and along the Coastal Trail to Nome.

Joe Redington live along the Iditarod Trail in South Central Alaska.   This was the historic trail Joe worked so hard to preserve. It connected up to the old northern trail system on the Yukon River.  In 1978, after 20 years of writing letters and talking to everyone and any one who would listen, the Iditarod Trail finally received national recognition as part of the National Historic Trails Registry.  This trail began in Seward and headed north through Knik, over the Alaska Range through Rainy Pass to McGrath, then to Ophir. Here it spilt off to the different gold strikes in Interior Alaska, some going north and hooking up again to the Yukon River Trail in Ruby and heading west or to Anvik on the lower Yukon, heading north to Kaltag.  At this point both trails met following the Kaltag Portage and the Coastal Trail to Nome.

Important Resources for teachers to use to teach about the origin of the race and history of this nearly 50 year old event are: