Trail to Alaska, Part I – History

Ever wonder how the dog teams from the lower 48 – perhaps Michigan, Colorado or Montana get to Alaska to compete in the Iditarod? They drive and there aren’t many choices for routes. They take the notorious Alcan Highway. My black lab friend, Ellie, travels the highway frequently. Hoping that I might have the opportunity to travel the highway someday, I was anxious to hear all she could tell me.

First though, how about a little history? Sometime in the 1920’s Thomas (not Ronald) MacDonald began to think about an international roadway running through Canada to connect the lower 48 states with Alaska. Back then Canadians weren’t really crazy about the large construction cost compared to the benefits for a few people living in the Yukon Territory. No deal!

When the Japanese bombed Pearl Harbor during World War II, the previously pie-in-the-sky idea of an international highway became a necessity as a crucial supply road linking the airbases between Edmonton, Alberta and Fairbanks. Military and national security considerations were important for both the United States and Canada with Alaska being a major strategic defense location.  An interior land route was much safer and quicker for supplying the troops in Alaska and remote Canada than barge transportation.  It was urgent to begin construction and completion had to be sooner rather than later. Mile Zero of the highway would be at Dawson Creek in British Columbia and move in a northwesterly direction 1,522 miles to Fairbanks connecting the air bases in the desolate wilderness.

Short Cut to Tokyo by Roderick M. Grant was published in Popular Mechanics, September 1942. In the story, Grant describes building the Highway. Under the leadership of Col. William Hoge, 10,670 troops (men) made the impossible possible and the impassible passible in unbelievable time. The Corp of Engineers would encounter a problem for every mile of road needing to be built. Bush country guides with dog teams lead surveyors from airbase to airbase. Travel was best at minus 30 degrees over the “ice road.” With the thaw came breakup, floods and ice flows. Huge Caterpillar bulldozers sunk fifteen feet deep in the “ooze” of muskeg swamps. Man-eating flies and mosquitoes swarmed the troops. They persevered through 20-hour workdays, monotonous skimpy meals, tattered insufficient clothing, makeshift housing and bitterly cold temperatures. 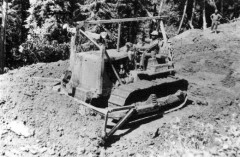 Construction began on March 8, 1942 and was completed eight months and 12 days later on October 28th. The supply road was for military use only until it opened to the public in 1949. When the public was allowed to travel the route, they found a narrow rough trail with steep grades, poor surfaces, sink holes and mega switchbacks to climb and descend the northern Rockies. Due to reconstruction, today’s traveler enjoys a slightly shorter route and the convenience of pavement, two or more lanes and gradual grades through the mountain passes. With the exception of some permafrost complications between Whitehorse and Tok, the road is a pleasure to travel where wildlife and pristine beauty abounds.

The Alaska Highway spans the Yukon Territory as Hwy 1, British Columbia as Hwy 97 and Alaska as Route 2. In the big picture, the Alcan is unofficially part of the Pan-American Highway that runs south all the way to Argentina!

There you have a snapshot of history about the only road that connects Alaska to the lower 48 states. Knowing the “beginnings” of the road make enjoying it today all the sweeter. Read more about the history of the highway at Wikipedia and see more of 1st Lt. Samual Lands’ photos at alcan-highway.com.  Some of the information in this story comes from these two great sites.  Stay tuned for Part Two of the Trail to Alaska as Ellie and I travel the highway.