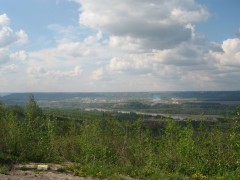 We’re back on the road, looking at Dawson Creek and Mile Zero in the rear view mirror. This portion of the Alaskan Highway is also known as British Columbia Highway 97. Ellie has told me that we’re going to see amazing things today. We’ll be going up and over the Canadian Rockies and there’s bound to be wild animals close to the road. I’ve got my camera ready.

Just 47 miles from Dawson Creek, we come to Fort St. John. There’s some history here! Established in 1794 as Rocky Mountain Fort, it’s the oldest European settlement in mainland British Columbia. Back then it was a fur trading post where the natives of the area came to trade furs with agents from the North West and Hudson Bay Companies. The agents sent the furs back to Montreal to be used for high fashioned clothing. The natives would return to their homes and hunting grounds with manufactured goods like knives and kettles and beads and blankets. You can read more about the fur trade from this story called “Our History – The Fur Trade.”  For 100 years fur trading posts like Fort St. John thrived but a change in fashion, the gold rush and the discovery of oil changed all of that. Today Ft. St. John with a population of 19,000 has taken the nickname “Energetic City” for its natural energy resources as well as its potential for positive growth. That’s a lot of progress from its beginnings as a trading post! In July the average high temperature is seventy-three degrees. In January the average low temperature is minus two degrees.

Two hundred and thirty some miles due north of Fort St. John we come to Fort Nelson. Checking into the history of this community, we find that it also began as a fur trading post owned by the North West Company and later bought up by the Hudson Bay Company. Fort Nelson has relocated five times due to a variety of natural disasters including fires and floods. According to our travel bible, The Milepost, just sixty years ago, Fort Nelson was without power, phones, running water, refrigerators or doctors – a real pioneer community! Fort Nelson became a “town” in 1987. Today about 5,000 people call Fort Nelson home. The area produces lumber as well as natural gas. Deer, moose, bear – black and grizzly, elk and caribou are plentiful and often seen along the road. Other animals common to the area include Stone Sheep, mountain goats, bison, wolves, coyotes, fox, lynx and wolverines. Travel books refer to Fort Nelson as the Serengeti of the north. We had to look that one up. Serengeti is a 5,700 square mile region in Tanzania, Africa that’s home to the largest mammal migration in the world. Comparing the Fort Nelson area to one of the ten natural travel wonders of the world is an extreme compliment – WOOF! Fort Nelson’s summer temperatures climb into the low 70’s, while winter temperatures range from zero to minus fifteen degrees Fahrenheit. British Columbia’s northern most traffic light is located in Fort Nelson! From this stoplight at 1,383 feet above sea level, the highway begins climbing to its summit in the Canadian Rockies.

Speaking though of the fur trade and trading posts, we had some questions. How did these trading posts get manufactured supplies for trading? How did the furs acquired through trading travel back to company headquarters in Montreal? The answer lies in the very strong French-Canadian men, the voyageurs. The voyageurs worked 14 hours a day at paddling and portaging. When it was necessary to portage between waterways, these powerful men carried 180-pound packs of furs or trade goods as well as the birch bark canoes. The canoes were of two sizes. The Montreal was 36 feet long weighing around 600 pounds and with a crew of 8 to 10, could transport three tons of cargo. The North Canoe was smaller – just 25 feet long. With a crew of 5 or 6, the North Canoe weighed and carried about half of the Montreal Canoe. Being a Voyageur was very hard and dangerous work. Most of the travel occurred while lakes and rivers were open but some voyageurs know as Winterers transported goods from out lying trading posts to rendezvous locations during the winter by dog sled! Do an Internet search about the “fur trade” to learn a lot more about the beginnings of Fort St. John and Fort Nelson. 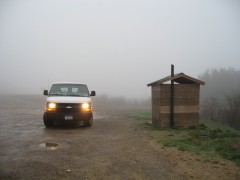 We’ve traveled ninety miles west of Fort Nelson to Summit Pass. As the name suggests we’re at the highest point of the Alaskan Highway – 4,250 feet. This area of the Rockies is known for drastic and sudden weather changes. The highest mountain in the area is the peak behind Summit Lake – Mount St. George – 7,419 feet. Here are a few words from The Milepost describing the road beyond the summit – “Northbound, the highway winds through a rocky limestone gorge before descending into the wide and picturesque MacDonald River Valley. Caution: No guardrails, 8 percent grade.” We’ll have to take their word for the beauty of Summit Lakes. Visibility was EXTREMELY limited during our trip! 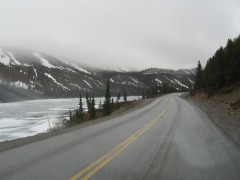 Well there you have it – travel and historical information for the section of the Alaskan Highway from Dawson Creek to the summit of the road in the Canadian Rockies. Stay tuned for more stories and pictures as we put the miles behind us.