We’re heading down from 4,250 feet, the highest point on the Alaskan Highway. Visibility at the summit was limited – maybe a quarter of a mile. We had to drive very cautiously. We have a saying in Wisconsin – if you don’t like the weather wait five minutes it’ll change. Lucky for us, the same must be true for British Columbia. 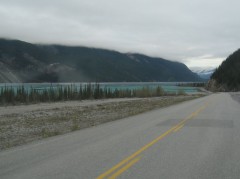 On the other side of the Canadian Rockies, visibility improved. Soon, we could actually see the high walls of limestone that form the gorge the road follows to the MacDonald River Valley. WOOF, look at that beautiful lake ahead! The water is a deep blue-green, sort of jade – it’s Muncho Lake. The name is from the native Kaska people and it means “big water.” That’s pretty true – its 7.5 miles long and up to 3.5 miles wide and 732 feet! The mountains surrounding the lake tower at 7,000 feet while the lake surface is 2,690 feet above sea level. We learned from the Milepost that the original road was built along the top of the cliffs. The old road was hazardous and travelers had many hair-raising experiences. Later the Army relocated the road down next to the lake. Even with the new safer roadway, travel is still slow with many sharp curves. There aren’t guardrails on the lakeside and drivers should watch for falling rock, Stone Sheep and caribou. We stopped to play at one of the many campgrounds in Muncho Lake Provincial Park. There was still some ice on the lake. The water was cold but we had fun! 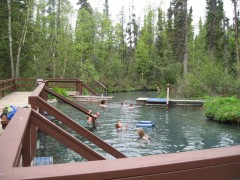 Just up the road we came to Laird River Hot Springs. Water temperature in the pools ranges from 108 to 126 degrees. Water flowing from a hot spring is heated by the earth’s mantle or you could say its geothermally heated ground water. The first boardwalk and pool facility were constructed at the hot springs back in 1942 when the highway was built. Folks soaking in the hot pools often see bear and moose eating nearby. Unfortunate for Ellie and me, pets aren’t allowed. As we leave the hot springs, we see a sign saying, “WATCH FOR BUFFALO.” My camera is ready. 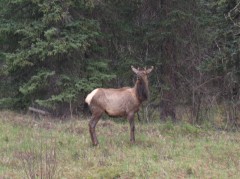 Twenty Miles beyond the springs we come to Smith River, and a sign about the historical Million Dollar Valley. Did they find gold here? Where’d this name come from? Explore North and Milepost provided information and gold had nothing to do with it. So here’s the story. Fourteen Lend Lease B-26 Martin Marauder planes were being flown to Russia following the Northwest Staging Route. The distance was too far for the bombers to go without refueling. The first leg of the flight from Boise, Idaho to Edmonton, Alberta was routine. When they left Edmonton for White Horse, pilots were given hand-sketches showing rivers and lakes to navigate their way. In poor weather, three of the pilots became lost and were dangerously low on fuel. Rather than run out of fuel, they decided to crash land if a safe spot could be found. Flying low, the pilots found this wide valley with a flat floor. All three planes landed safely on the deep snow. Luckily, the planes had plenty of survival gear. Getting along for a couple of days until they were located wouldn’t be a problem. Bad weather stretched the rescue mission by ski-equipped plane out for nearly a week. Later, military salvagers flew in to remove usable parts and equipment but the aircraft shells were left. Folks began to refer to the valley as Million Dollar Valley based on the value of the bombers sitting there. This history stuff is so interesting. Consider reading Wings over the Alaska Highway by Bruce McAllister. 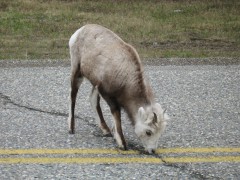 When the sign warned drivers to watch for animals on the road, not just near the road, it spoke the truth. We noticed a few cars stopped up ahead and it was because Stone Sheep were licking salt from the surface of the road, well actually right off the yellow line in the middle of the road. They didn’t seem to notice or care about the large wheeled beasts gathering near them on the blacktop. They were interested in the salt; it was their road until their craving was satisfied. A little closer to Watson Lake, more cars and trucks were stopped. Bison were the subject of great interest, especially a very young calf and cow grazing on grass. We knew the calf was young because its umbilical cord was still attached. Another few miles and we see more ungulates only this one stands tall – it’s an elk. An ungulate is a hoofed mammal. Odd toed ungulates have either one or three toes while even toed ungulates have two or four toes. Even though dogs have four toes, we aren’t ungulates! 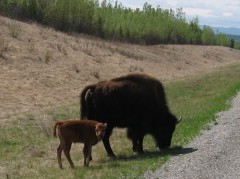 Just wondering, have you studied bison? We read about them in Wikipedia and this is what we learned. They look peaceful and unconcerned but the truth is their temperament and behavior can be very unpredictable. The large beast can gallop for long distances moving at a speed of up to 35 miles and hour. Large bison can weigh up to a ton. As for weapons, both males and females have horns and their large head can serve as a deadly battering ram not to mention their hind legs that can inflict serious injury. When bison ran wild, they were second to only the Alaskan brown bear as a killer. In early times, bison were considered to be a dangerous, savage animal that feared nothing and could beat any foe except the early hunters who thinned herds to the point of extinction.

Did you know there are bison along the Iditarod Trail? Back in 1965, eighteen of the big brown beasts were moved from Canada to the Farewell Burn and then a few years later another 20 were added to the herd. Now there are 200 to 300 bison that graze in the area. Unlike moose, the Bison have never been a problem for Iditarod teams but they are curious. In his trail notes, Don Bowers, Jr. tells about mushers who decide to pull over to rest with their teams and wake up to a buffalo breathing in their face! It was the hunters out at the Hunting Camp in the Burn who lent Paul Gebhardt a snowmachine to catch his team after his gangline broke in 2006.

Well, there you have it, stories about some of the animals we saw, events of the past and an idea of how beautiful Muncho Lake is. Stay tuned; in just a few miles we’ll reach Watson Lake.