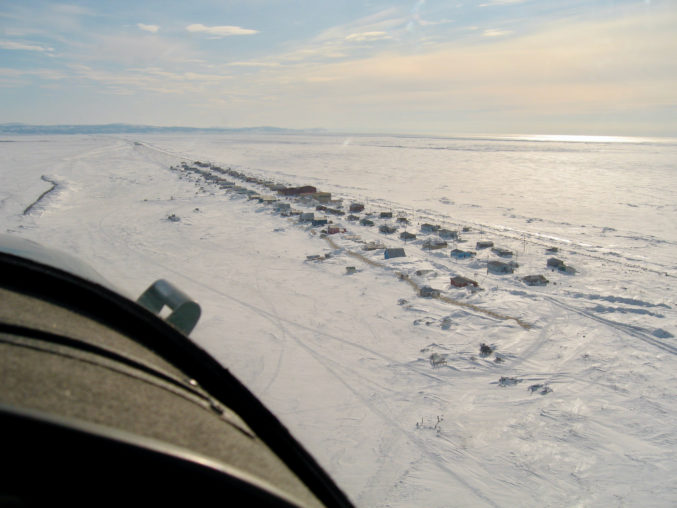 The village of Shaktoolik (shak-TOO-lick) is located on a little spit of land that juts out into the Norton Sound.  There is one road that runs through town out to the air strip with houses, two stores, two churches, the school, the power plant, the city well, the clinic  and the Armory spread along its sides.  No cross roads, just one long main road!  Most of the residents are from Inupiaq family lines.  The name Shaktoolik means “scattered things.”  Early Shaktoolik settlers lived 6 miles up the river from the present village site.  Because of storms and high winds, the people relocated to the present site at the mouth of the Shaklootik River.  Another story has it that originally the villagers did live out on the spit but after their village burned they decided it was just to windy to rebuild there so they moved inland.  After spending one summer with the mosquitoes in the new sheltered area, they decided to move back out on the spit where there was wind to blow the mosquitoes away. 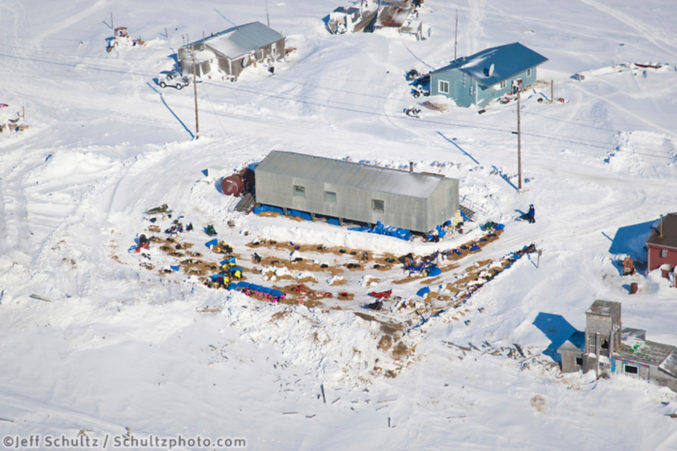 In the 1890’s there was a famine in the region.  It was thought that reindeer could provide a new source of food and clothing.  The government hired herders from Norway and brought them along with animal to Unalakleet and Shaktoolik to teach the Inupiaq Eskimos how to raise, tame, corral, lasso and drive reindeer.  The Norwegians even taught the Eskimos how to make cheese using reindeer milk and make clothing from reindeer skins.  Twenty years later, five hundred thousand reindeer grazed in western Alaska.  A reindeer transportation system was developed.  Reindeer were used to deliver mail and haul freight for the military and equipment for the gold miners.  Domestic herds used mostly for food exist even today.  Handler learned about the Reindeer Project at a Sami Exhibit in the museum at McGrath, Alaska. 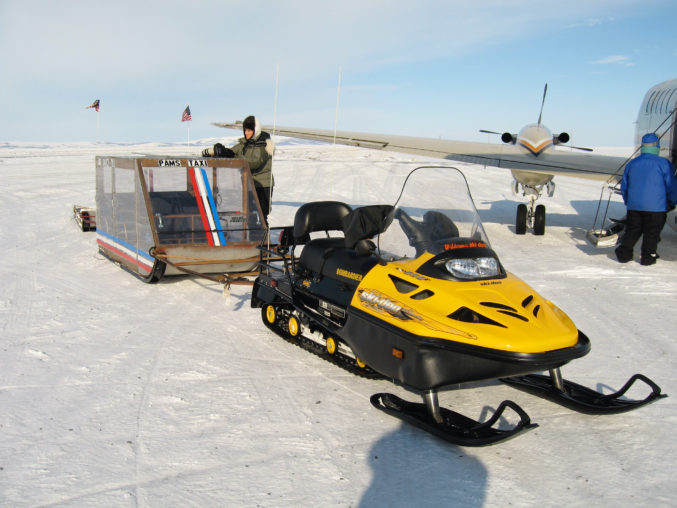 From Wikipedia, I found out that residents of Shaktoolik live a subsistence life style.  They depend on fish, crab, moose, beluga whale, caribou, reindeer, seal, rabbit, geese, cranes ducks, ptarmigan, berries greens and roots for their primary food sources.  There are some part time jobs in commercial fishing, education, construction and reindeer herding.  The village has a piped water and sewer system that serves two-thirds of the homes.  People and cargo arrive in the village either by air or water transportation.  The Alex Sookiayak Memorial Airstrip is nearly two miles from the center of the village.  Daily flights arrive from Nome.  Pam’s Taxi service provides a shuttle between the village and the airstrip.  Local travel is by 4-wheeler, motorbike, snowmachine and boat.  Fifty students attend classes at the K-12 Shaktoolik School.  If asked what they like to do for fun, kids will say they love outdoor activities, hunting and fishing and they enjoy having big bonfires with their friends. 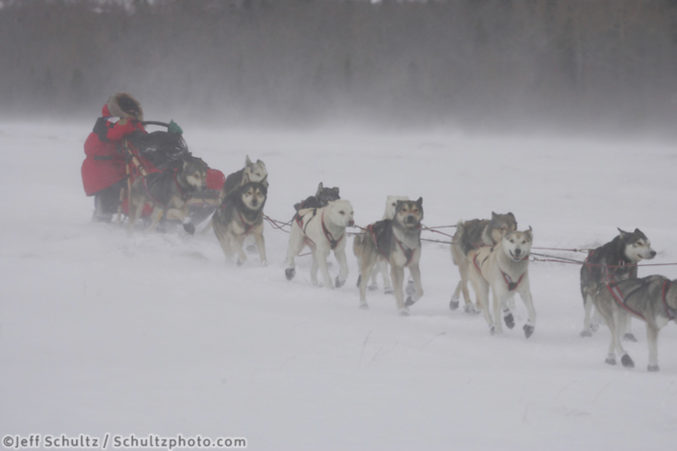 Iditarod teams follow the main snowmachine trail from UNK to Shak.  From sea level at UNK, the trail rises 1,000 feet to its highest point in the Blueberry Hills.  The teams will travel through woods, open areas, sloughs and dunes; over exposed ridge tops and along the barren coastline.  Don Bowers tells the mushers in his trail notes to be ready for the Shaktoolik winds.  He says if the wind is blowing from the north it can reach hurricane force.  That combined with below zero temperatures can drive the windchill to the bottom of the charts.  Libby Riddles’ Storm Run in 1985 is perhaps the best know story about the infamous winds and blizzards of Shaktoolik.  Departing shaktoolik in a howling blizzard, Riddles left her competition behind.  It was a bold move but living and training on the windy coast near Nome, Libby was confident she and her dogs could make it through the storm.  She did and became the first woman to win Iditarod. 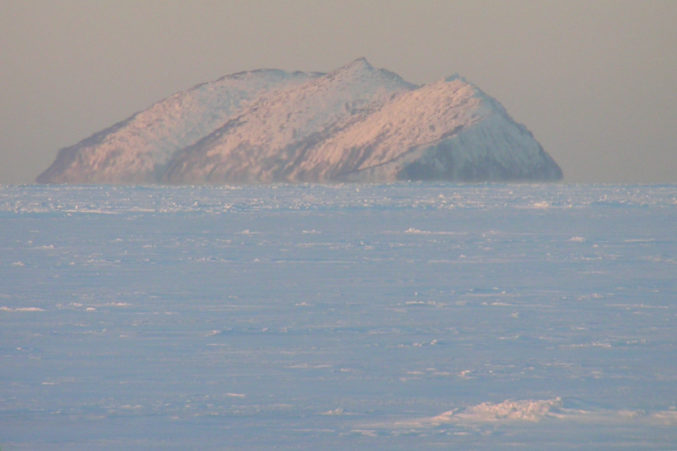 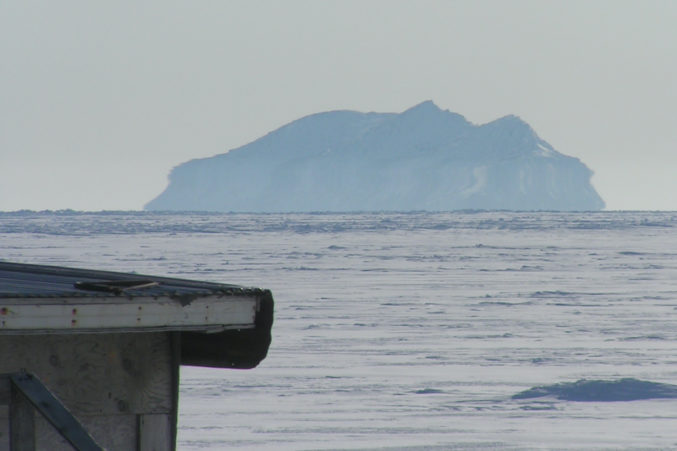 From Shaktoolik, the residents can keep and eye on Besboro Island.  Looking at a map, Besboro is the only island in Norton Sound.  It seems to be a magical landform.  Height, width, color, size and shape change minute to minute, hour to hour and day to day.  One of the explanations for these continuous changes is that cold air is trapped near the ice by warm air aloft.  The light’s rays are bent as they pass between the two layers of air and a mirage occurs.  Tired mushers don’t believe their eyes as Besboro rises, falls and shimmers while they run to the village of Shaktoolik.

Well, there you have it – a snapshot of life in Shaktoolik, a peek at Besboro and a few words of warning about the trail.  From Shaktoolik, the mushers run across Norton Bay to Koyuk, the northern most Iditarod checkpoint.  Stay tuned for that story and remember in everything do your best every day and always have a plan.