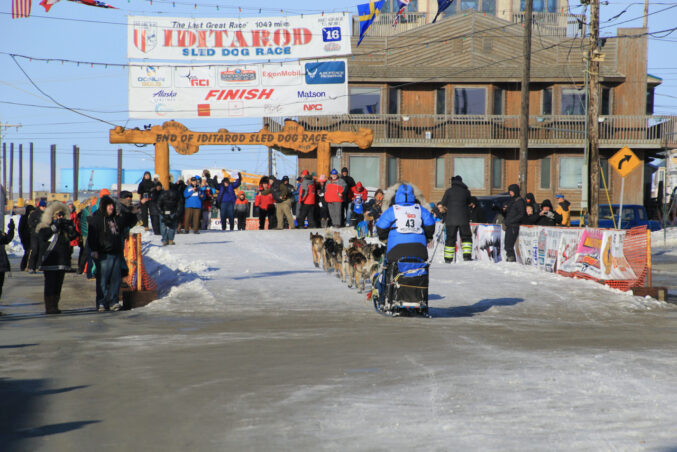 The fire siren sounds in Nome to announce that a dog team is approaching Front Street.  It wails for the champion, the Red Lantern and every musher in between.  Family, handlers and fans put on their coats, boots, hats and mittens and gather at the burled arch to welcome another Iditarod finisher  Approaching the burled arch marks the end of a very personal journey for the mushers and dogs.  One thing is for sure – there is one Iditarod Champion but every musher that starts the race whether he or she makes it to Nome, is a WINNER. 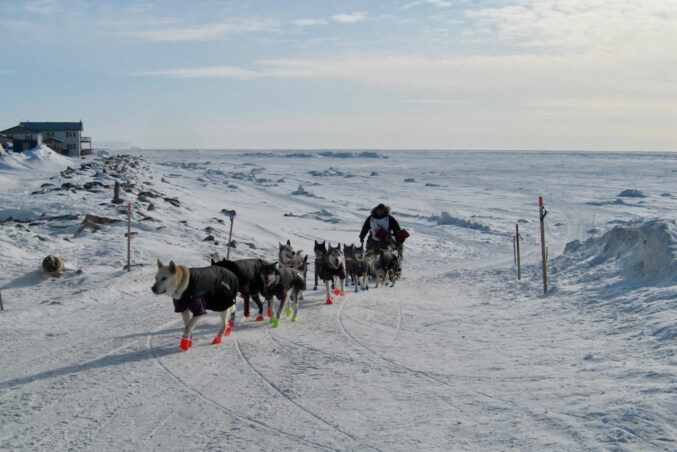 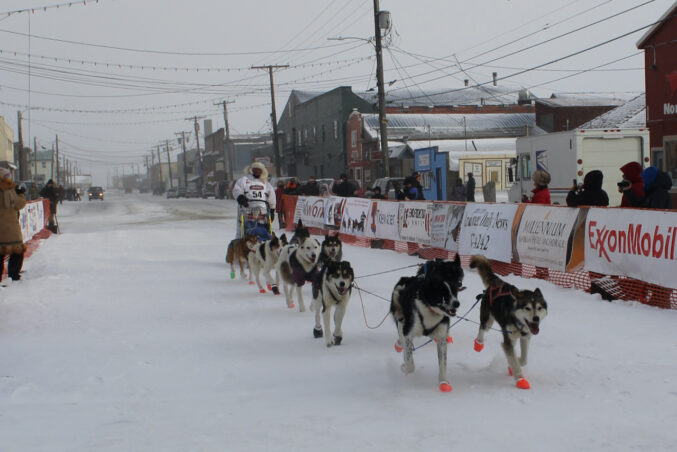 When the lead dog’s nose crosses under the burled arch, the team has finished Iditarod.  A Checker steps forward to make sure the musher has all the mandatory equipment in the sled bag.  If so, the musher signs in and their race is  in the history books.  Next, the dogs go down to the dog lot for a meal, a massage and relaxation.  The dogs don’t stay long in Nome, they are soon booked on a flight to home in rows 1 thru 10 on Alaska Airlines.  Even though the dogs head home, the mushers stay for the Finisher’s Banquet which is 14 days after the start of the race.  This banquet is different than the one before the race.  Mushers are very focused and careful not to reveal anything about their race strategy at the Anchorage banquet.  The Nome banquet is very cheerful and friendly – the champion as well as every finisher is honored and numerous awards are announced.  The food is great – shrimp, prime rib, salads, desserts and sleds full of fresh strawberries dipped in chocolate. 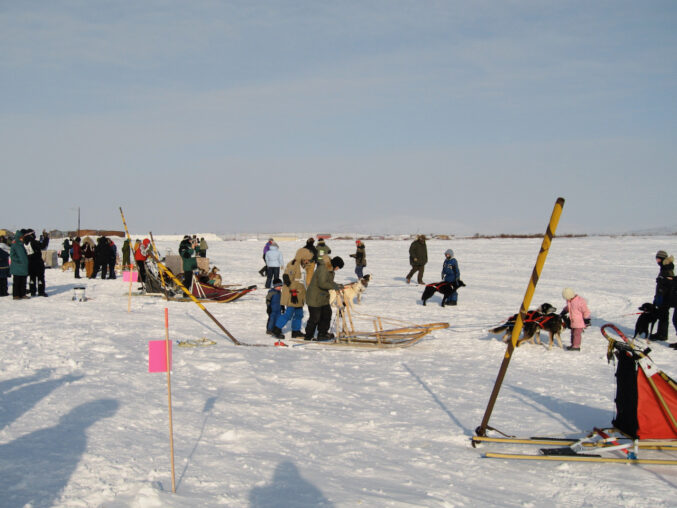 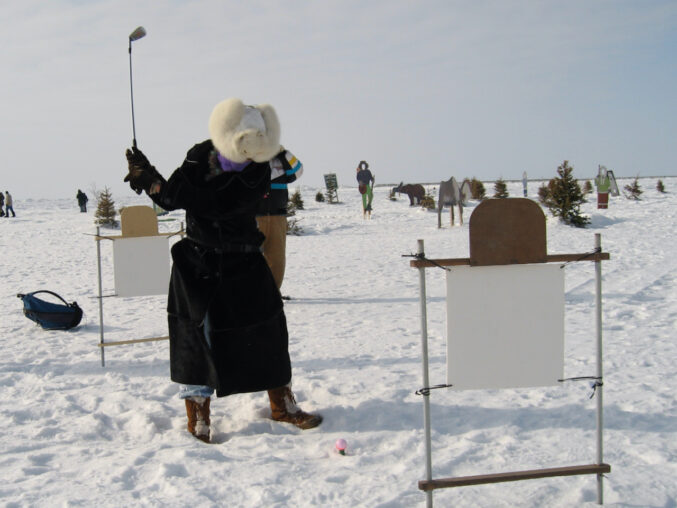 Nome is a very active place in March.  The largest basketball tournament in the world (Lonnie O’Connor Iditarod Basketball Classic) is played in Nome at the same time Iditarod is finishing.  A golf tournament, The Bering Sea Ice Golf Classic, is played out on the frozen Bering Sea.  The 3 Dog – 3 Mile Sled Dog race is a citizen’s race sponsored by the Nome Kennel Club.  At the Bureau of Land Management, there are movies playing about the history and geography of Alaska.  There is also an art fair where many Alaska Natives – Yupik, and Inupiaq display and sell their carvings, paintings, sewing and other hand crafted pieces of art.  So much to do and so little time. 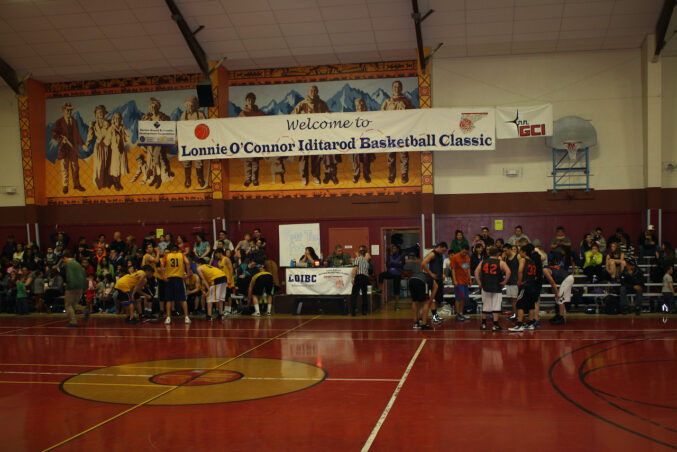 Although Inupiaq people hunted in the area, there wasn’t a native settlement at Nome before the gold rush of the early 1900’s.  Three lucky Swedes discovered gold at Anvil Creek.  Word spread and soon Nome had a population of 10,000 with thousands more arriving by steamship from Seattle and San Francisco.  Some estimate that during the gold rush 20,000 people lived in Nome where a tent city spread for 30 miles along the coast.  Today Nome has a population of 3,500 with slightly more than half being of Inupiaq heritage.  Nome and sled dogs bring to mind the 1925 Serum Run or “Great Race of Mercy” where the diphtheria serum was delivered to Nome in time to avoid catastrophe. 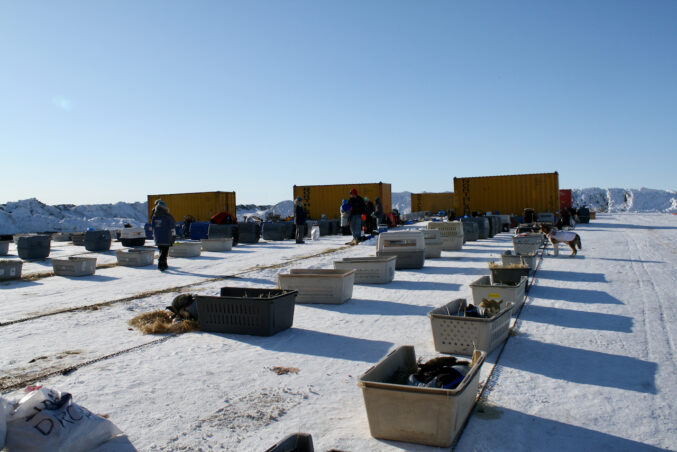 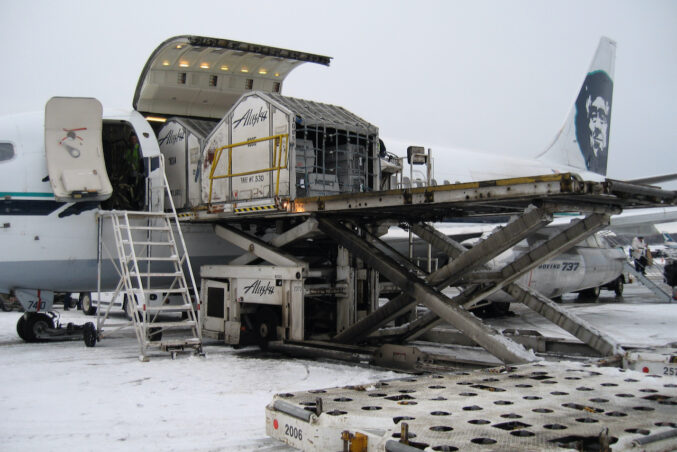 Many cities in Alaska were named after explorers, politicians or heros.  This wasn’t the case for Nome.  Nome got its name by MISTAKE.  There was an unnamed cape on the map a British Naval officer was using for a voyage up the Bering Strait.  The officer wrote “? Name” on the map next to the point of land in question.  Later a cartographer (map maker) was looking at the notes made by the navigational officer and misread the officer’s note as C. Nome and wrote Cape Nome on his map.  Nome was most likely named for that mistakenly named nearby cape.  Another theory is that the name came from Nome, Norway by means of the “Three Lucky Swedes” who were first to discover gold in the area.  This theory was presented in Wikipedia in the Nome, Alaska entry. 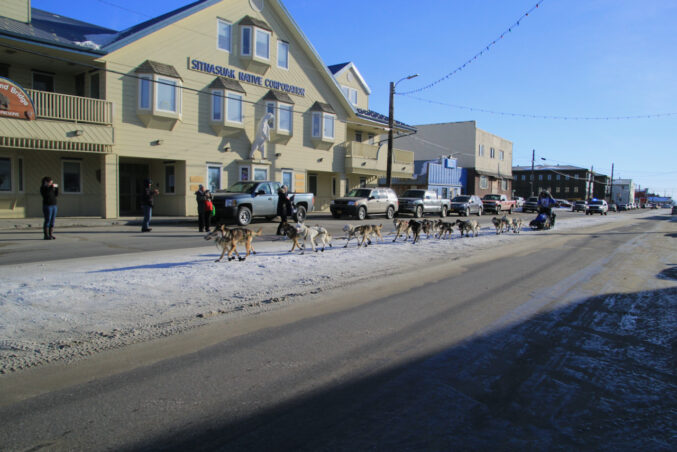 The Alaska Natives that live on the Bering Coast are of two language groups – the Yupik live to the south of Unalakleet and the Inupiaq life to the north of Unalakleet.  Their way of life is ruled by available resources.  For example, Yupik and Inupiaq people living by the sea hunt seals and will wear seal skin hats, boots and mittens but Athabascan Indians living in the interior wouldn’t have items made from seal skin because they have no access to seals.  The Yupik and Inupiaq made weapons of bone, ivory and driftwood that were handsomely decorated.  They believed that animals would only want to be killed if the weapon was beautiful. Whale hunting was and still is an Inupiaq tradition. 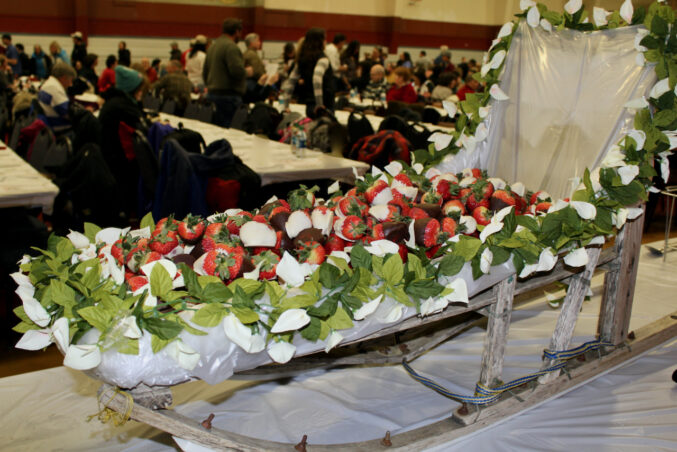 Well, there you have it – some information about the native culture, history, climate and Iditarod events in Nome.  This wraps up the Virtual Trail Journey.  We loved to hear her stories about the checkpoints and see the pictures.  It made us feel like we’d been on the trail.  I hope you’ve learned things about the villages and the people living along the Iditarod Trail.  I’ll have more stories to share during the race so stay tuned and remember – in everything do your best everyday and always have a plan.