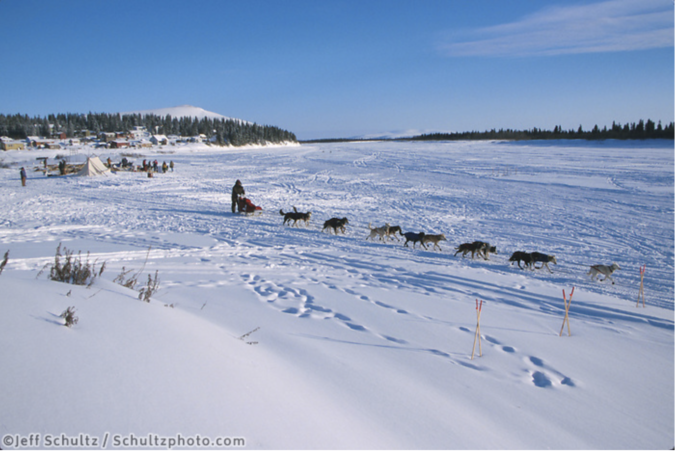 When mushers leave Elim, they head along the shore to a spot called Walla Walla.  Here the trail crosses a peninsula and climbs over the Kwiktalik Mountains.  The highest point that the mushers reach is 1,000 feet above sea level at Little McKinley  Trail expert, Don Bowers, says this the toughest climb on the last half of the trail.  Today, the trail runs by Golovin then follows the snowmachine route across Golovnin Lagoon and up the Fish River to White Mountain.

Golovin (GULL-uh-vin) was a checkpoint at one time but because the distance between Elim and White Mountain is only 46 miles, race officials decided it wasn’t necessary to have three checkpoints in such a short distance.  Inupiaq people live in the village.  In the early 1800’s Russian Navy Vice-Admiral Vasily Golovnin explored the bay and lagoon that now hold his name.  Did you notice the difference in spelling?  The bay and lagoon are spelled exactly like the explorer’s name but the village uses the spelling “Golovin”.  There are 140 people who live there. Forty-nine are students who attend Martin L. Olson School in grades K-12. 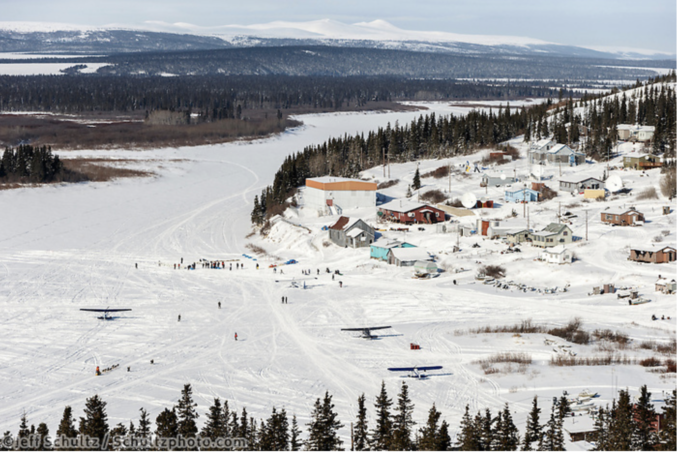 White Mountain is the only village on the Seward Peninsula that is located inland from the Bering Sea.  Two Hundred and three people live in the Inupiag village.  The culture has been influenced by neighboring Yupik people as well as the Klondike Gold Rush.  Present day White Mountain began as a fish camp named Nutchirviq which means “mountain look-up point.”  During the gold rush of 1900, a warehouse for mining supplies was the first non-Native built structure.  After that an orphanage that later became a school was built followed by the Covenant Church.  The post office opened in 1932.  Fire destroyed the high school building in early 2006.  A new school was built on the southern edge of town for the White Mountain Wolves.  Forty-nine students go to school in White Mountain.

Some folks in White Mountain hold jobs with the school, native store, post office, city and airlines.  Some folks work seasonally in construction and firefighting.  There is one reindeer farm and some residents hold commercial fishing permits.  Ivory and bone carvings; knitting, crocheting and skin sewing also bring income to a few homes.  Depending on subsistence hunting and fishing, many people spend their whole summer at fish camp to harvest salmon and other fish.  Beluga whale, seal, moose, reindeer, caribou and brown bear are commonly eaten along with berries, greens and home grown vegetables. 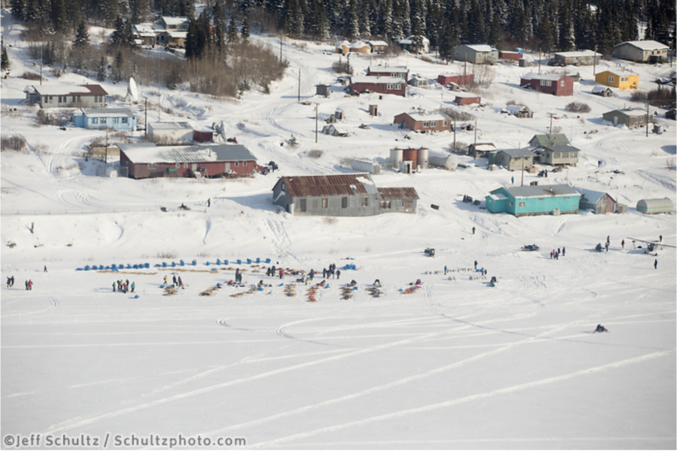 There are no roads to White Mountain so travel and deliveries are by boat and plane.  Locals travel by snowmachine, boat or ATV depending on the season.  Average summer temperatures fall between 43 and 80 degrees.  Winter temperatures range from 7 below to 15 above. White Mountain receives about 15 inches of precipitation with about 5 feet of snow.  If you lived at White Mountain you could expect rain or snow 120 days of the year and sun on 150 days.

When mushers reach White Mountain, they are required to take an 8 hour rest before they make the final push to Nome, 77 miles away.  The checkpoint building is up the hill beyond the Native Store.  Teams park on the shore of the Fish River.  School kids come down to collect autographs and talk to the mushers.  Villagers come down to the river to talk with their friends and enjoy what’s going on.  Everyone enjoys the view of nearby White Mountain for which the village is named.

Well there you have it – a summary of Don Bower’s trail description and compiled information about Golovin and White Mountain from Wikipedia, each village’s home page and Alaska’s Online Community Data Base.  About now the mushers are both excited to be so close to Nome and yet sad that their personal Iditarod journey is nearly finished.  Stay tuned as Handler tells us about Topkok and Safety.  Remember, in everything do your best every day and always have a plan.