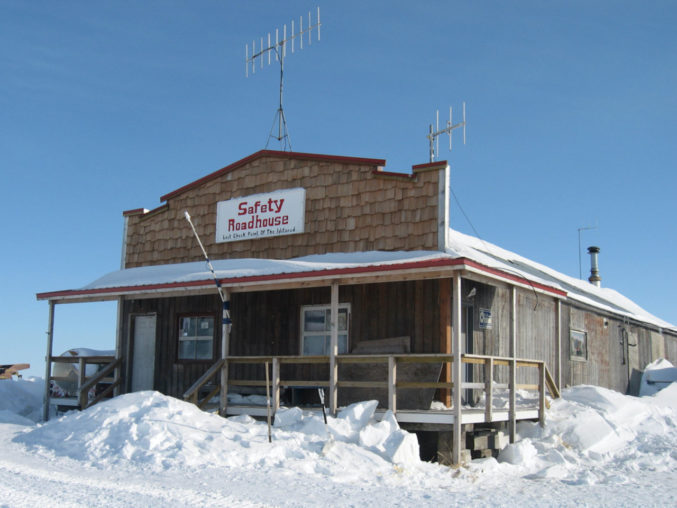 Out in the middle of no-where on the Nome to Council Highway sits the Safety Roadhouse.  Looking back toward White Mountain, you see nothing but a few hills and snow, looking toward Nome you see nothing but flat land and snow.  Looking out over the Bering Sea, you see nothing except sea ice and ice jumble.  The checkpoint is located in the old roadhouse.  Safety is named for Safety Bay where fishing boats sought shelter when the Bering Sea became dangerously rough.  The Safety Roadhouse is a popular stop for snowmachiners as they head from Nome to the Topkok Hills and summer travelers as they head to Council.  The Nome Kennel Club sponsors an award given to the musher finishing in the top twenty with the fastest run from Safety to Nome.   Check the archives to see who has dominated the 22-mile run. 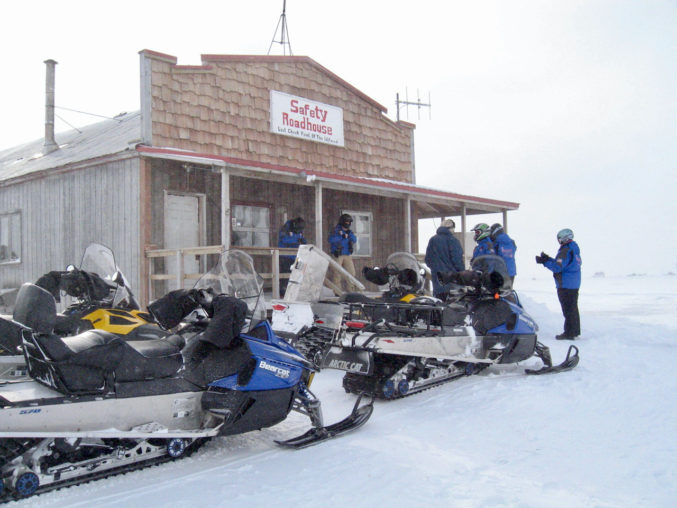 Snowmachiners at Safety Roadhouse in Near White Out Conditions (Photo Credit: Terrie Hanke)

From White Mountain, it’s only 77 miles to Nome BUT if the wind blows or a storm hits, the 77 miles can be very dangerous.  The highest ridge between White Mountain and Safety is Topkok at 500 feet above sea-level.  The trip to the summit is wide open to the wind and look out for ground blizzards.  In a ground blizzard, there isn’t any precipitation falling instead, the wind is blowing snow and ice crystals that are already on the ground.  This area is also known for its wind tunnels called “blow holes.”  In Trail Notes, Don Bowers warns that mushers and dogs can be enjoying a calm beautiful run and suddenly be in the midst of hurricane force winds with blowing snow and zero visibility.  Winds can go from calm to hurricane force within a minute and return to calm just as quickly.  Dogs will tend to turn away from the wind which means they’ll be veering toward the sea ice.  Don’s best advice  in poor visibility is to follow the trail markers and stay away from the driftwood along the beach and the open sea beyond.

Bower’s warnings are well illustrated by the finish of the 2014 race.  Jeff King, leading by an hour, was on his way to his fifth Iditarod win but encountered extreme winds a few miles short of Safety.  King’s team was blown off the trail.  He hunkered down to wait the storm out.  Aliy Zirkle passed him but didn’t even know it because the visibility was so limited.  She made it to Safety and decide to sit the storm out there.  Dallas Seavey passed Jeff’s team along the trail then checked into and out of Safety not knowing Aliy was there.  He had no idea that he had passed King and Zirkle and was completely surprised to receive a champions welcome in Nome.  King scratched from the race and Aliy Zirkle finished 2 minutes behind Dallas. 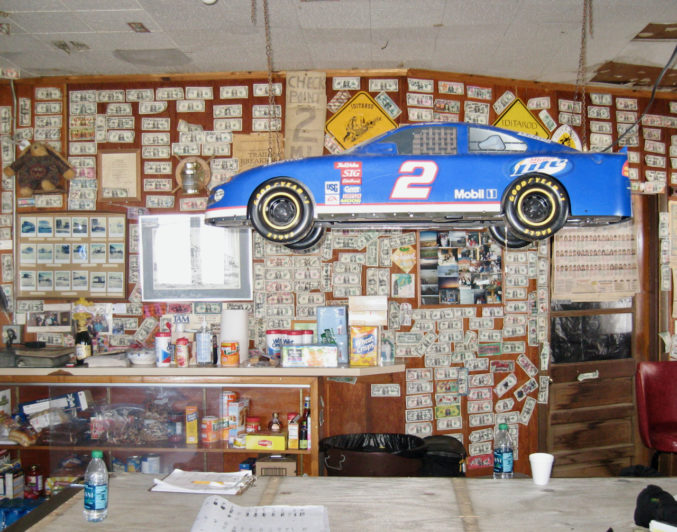 With the burled arch in Nome only 22 miles away, most mushers don’t stop long in Safety.  But if they go inside for a bowl of soup, a cup of coffee, to wait out a storm or use the facilities they’ll find the walls covered with dollar bills – there must be thousands of them.  It seems that long ago a tradition was established.  When at the Safety Roadhouse, visitors sign a dollar bill then staple or tape it to the wall. 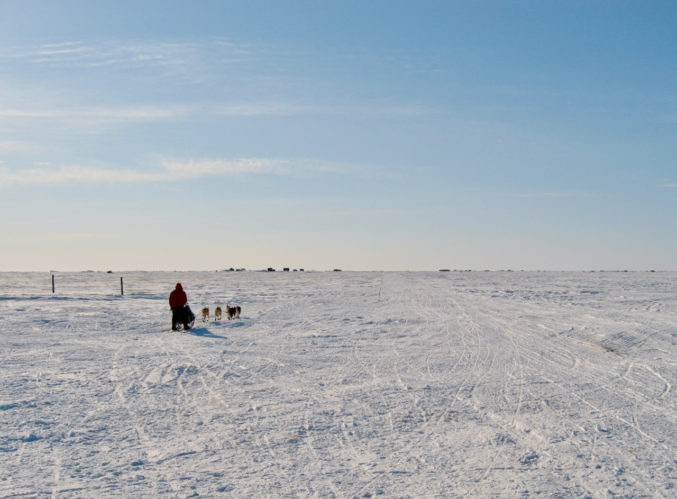 Iditarod Air Force pilots get to enjoy the beauty of the area from an altitude of a couple thousand feet.  There is a herd of musk ox in the area.  The big burly prehistoric beasts gather into a tight circle, with the young in the middle, when a plane flies over head.  Often red fox can be seen running along the trail.  Out over the sea ice, pilots spot seals basking in the sun.  As the Cessnas fly over, they dive through their holes back into the sea.  Those seals are slippery critters.  There is a large herd of domestic reindeer that roam and forage on the tundra near Nome.  Not far from Safety, three abandoned locomotives, the Last Train to Nowhere, and a gold dredge that remain from the 1898 gold strike are nearly covered in snow but visible from the air.  With scenery like that, it’s no wonder these men and women love their job of supplying checkpoints up and down the trail.

There you have it – some advice from trail expert Don Bowers about the trail between White Mountain and Safety, a description of Safety and the surrounding area plus a story about the unexpected outcome of the 2014 Iditarod.  A couple of hours after leaving Safety, mushers will be running down Front Street in Nome to cross under the burled arch.  Stay tuned to learn more about Nome.  Remember, in everything do your best and have a plan.