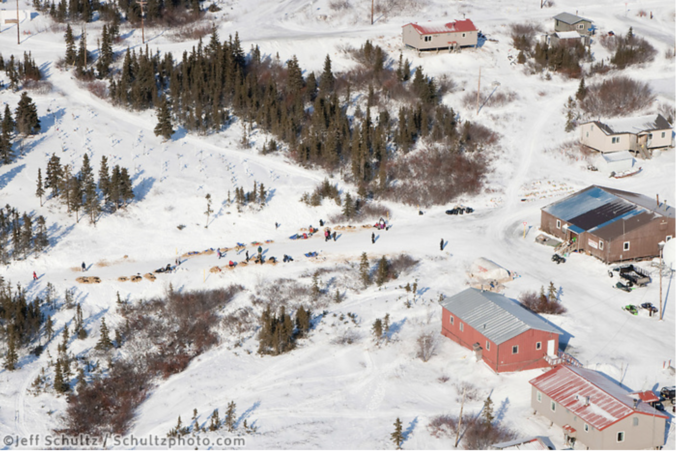 Just out of  Shaktoolik, teams will run through rolling tundra.  Some of the villagers have reindeer herds that graze there.  Once out on the sea ice, the great white expanse of Norton Bay can be overwhelming and confusing, especially in high winds.  Don Bowers, Jr. calls the 50 mile section of trail from Shaktoolik to Koyuk bleak, flat and monotonous. More than one musher has lost the trail across the bay  A good coastal leader, one who is used to wind and wide open spaces is worth its weight in gold out on Norton Bay. 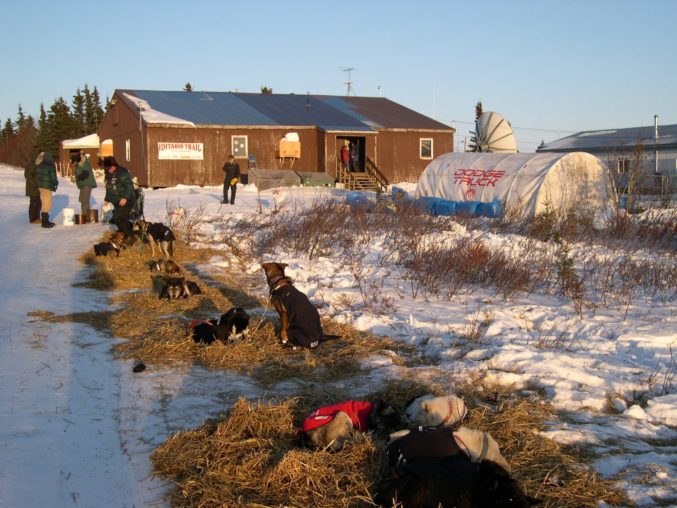 Koyuk a village of 310 is located at the mouth of the Koyuk River on Norton Bay.  Most of the people living in the village are Inupiaq Eskimos.  They depend on fish, reindeer, seal, beluga whale and moose for meat.  Some people have part-time jobs to supplement their subsistence lifestyle.  Some hold commercial fishing licenses and fish herring.  Some folks work at reindeer herding.  People and supplies travel to and from Koyuk by air or sea.  Like most other bush villages, local transportation is by snowmachine and 4-wheeler.  The average summer temperature falls between 46 and 62 degrees.  In winter the average temperature falls between eight below and eight above.  The lowest temperature every recorded in Koyuk was 49 degrees below zero.  The highest recorded temperature was 87.  Nineteen inches of annual precipitation includes forty inches of snow. 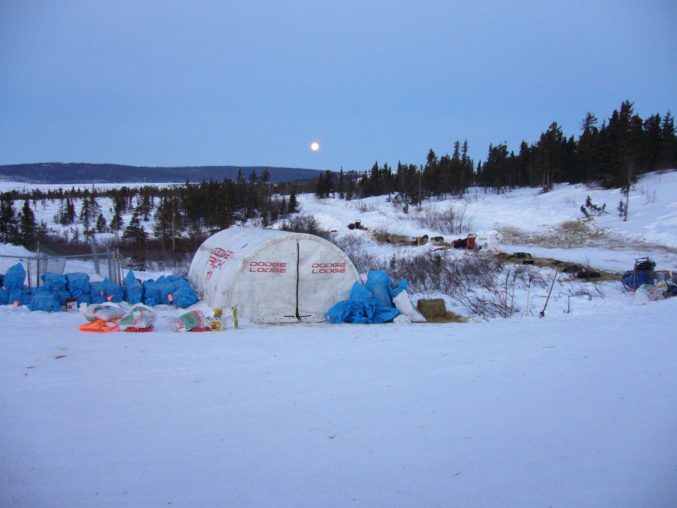 Viewing the Full Moon As It Sets over the Dodge Lodge in Koyuk (Photo Credit: Sonny Chambers)

Early residents in the area were nomadic and moved about to gather and harvest food.  Around 1900, the actual village of Koyuk began to take shape.  Dime Landing, Haycock and Norton Bay Station were nearby boom towns that supplied area miners.  Both gold and coal were mined up river from Koyuk.  The first school was established in 1915 by a church mission .  In 1928 the government built a new school.  Today the K-12 Koyuk-Malemute School has 124 students.  When asked what they like to do, most students will tell you they like to hunt, fish and play basketball.  Volleyball, skiing and Native Youth Olympics also rank among the top favorite activities for high school kids.

Well, there you have it – a little trail description and some basics about the village of Koyuk and the folks who live there.  I decided to divide this story into two parts.  I hope you take time to read about the great mushing history that has taken place on the Norton Bay section of the Iditarod Trail.  Thanks to Koyuk Checker Sonny Chambers for sharing his pictures.  The next checkpoint Handler is going to tell us about is Elim but first she’s going to tell us about some of the “history” of great sled dogs and mushers that’s taken place on the ice of Norton Sound.  Stay tuned for those stories and remember, in everything do your best every day and always have a plan.  If you fail to plan, then you plan to fail.