Drive on the top half of your gas tank. That’s the advice given to all travelers on the Alaska Highway. It’s a long distance between pumps and you never know if the gas stop that you’re expecting to be open will be open. The distance from Watson Lake to Whitehorse is 274 miles, not a drive you’d tackle with a half tank of gas. When we pulled into the gas station at Watson Lake to fill up, our humans saw a sign on the pump – OUT OF REGULAR! We had no other choice than to purchase premium at a premium price, right close to $10 for a gallon. With a full tank, we hit the road to Whitehorse. 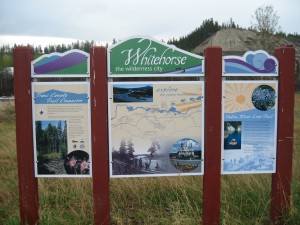 Whitehorse serves as either the start or finish of the 1,000 miles Yukon Quest sled Dog Race. The community shares the responsibility with Fairbanks on the other end. Quest mushers take to the trail in the early part of February. Many of the same mushers headed to Nome on the Iditarod Trail early in March. Hugh Neff, 2012 Quest Champion will be joined by Lance Mackey – Quest 3rd place, Jake Berkowitz – 4th, Brent Sass – 5th, Sonny Lindner – 7th, Kristy Berington – 9th, Trent Herbst – 12th. Since Lance Mackey made it a double, winning both the Yukon Quest and Iditarod in the same year with 13 of the same dogs, more mushers realize that running both long distance races in the same year enhances canine athlete performance. Another double of importance occurred in 2011 when Jodi Bailey finished her first attempt at Iditarod and Yukon Quest in the same year. One huge difference between the two races is road access to most Quest checkpoint. Jodi Bailey says when you’re out on the Iditarod, the checkpoints are closer together so you never feel really alone where as on the Quest, checkpoints can be 200 miles apart and when you’re out there, you are alone with your dogs.

Whitehorse at mile 887 of the highway has a population of 24,000 people. Folks who live there brag about the differences in the climate – no two winters are alike. Lowest recorded temperature in Whitehorse is minus 64 degrees Fahrenheit while the warmest is 94 degrees. Ten inches of precipitation falls each year – half snow, half rain. On Summer Solstice people enjoy twenty-one hours of sunlight but on the Winter Solstice they have only five and a half hours of daylight. Whitehorse, situated on the mighty Yukon River is the capitol of the Yukon Territory.

More than 100 years ago, the railroad connecting Skagway with the Yukon River was completed. Whitehorse was the northern railhead. The city became known as a transportation hub receiving commodities by rail and by the stern-wheelers that navigated the mighty Yukon River. It wasn’t until WWII and the building of the Alcan Highway that goods and people could reach Whitehorse by road. Both the gold rush and the building of the highway were boom times for Whitehorse. Mineral exploration, mining and tourism contribute to the current economic success of the area. The first miners in the area thought the foaming river rapids resembled white horses’ manes, thus the name of Whitehorse was given to the rapids and the community. 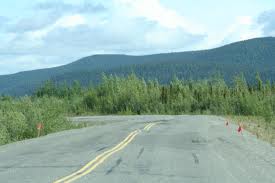 Next stop is Sheep Mountain but first a word about the frost heaves. Frost Heaves occur when a road is built over permafrost, permanently frozen ground. When the surface is paved it causes the earth beneath the roadbed to heat up, thus melting the permafrost turning it to a jello-like consistency. The melting causes the roadbed to “HEAVE” creating a highway that is much like a roller coaster with dips that can cause serious damage to vehicles that travel too fast.

Sheep Mountain is a great place to stop to view Dall sheep. From the interpretive center, visitors can see sheep up close and personal through powerful telescopes as they graze on the side of the mountain. Look in the opposite direction of the mountain and you’ll have a view of Kluane Lake. It’s the largest lake in the Yukon Territory – 150 square miles or about 43 miles long. You can see across it but not it’s entire length. A couple of miles past Sheep Mountain we come to a place called Soldier’s Summit where there is an amazing view of Kluane Lake. This is where the ribbon cutting ceremony to officially open the Alaskan Highway was held on a very blizzardly November Day in 1942 and then again in 1992 for the 50th anniversary of the highway. 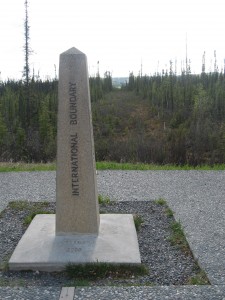 The last miles fly by quickly and soon we’re parked beside a sign that welcomes us to Alaska! There is a swath cut through the forest marking the boundary between the United States and Canada. There isn’t much difference in the road from one side of the border to the other but what is different is the mileage marks are now miles rather than kilometers. We’ve come almost 1,200 miles since leaving Mile Zero in Dawson Creek.

Ellie and I Hope you’ve learned something about the trail the mushers from the lower 48 states travel to compete in the Iditarod – a challenging long distance trip during the dead of winter before beginning the Last Great Race. Stay tuned for Part VII when we interview Iditarod veterans Ed Stielstra and Triton about their trip up the Highway to compete in the 40th Last Great Race. 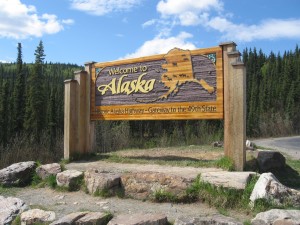