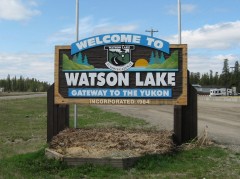 Six hundred and five miles from Dawson Creek, we leave British Columbia behind. Ellie and I are quite excited about reaching the Yukon Territory. We’re now traveling on Yukon Highway 1. Watson Lake is the first settlement we come to – it’s known as the “Gateway to the Yukon.” Handler has filled us in on some of the cool things we’ll see in Watson Lake but most important is that her father was stationed here during World War II as an aircraft mechanic. This is the Watson Lake he talked about when telling of his days in the Army-Air Force. 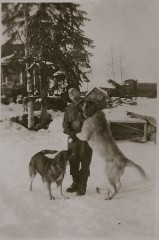 One of the stories he told was about a bear cub. It seems that the mother black bear was killed when her cub was very young. The soldiers from the base adopted the cub – fed it and took care of it. The cub just roamed around the base and followed the soldiers here and there and everywhere. The little cub was as friendly and playful as the base sled dogs. One day the cub walked up behind a flight attendant who’d just flown in from another location. She was on her way to the mess hall when the little bear nuzzled her hand with its cool black nose. The flight attendant expected so see a dog when she looked down but NO – IT WAS A BEAR! The scare nearly caused her to jump out of her skin! A word of caution – don’t try this at home.

Back in 1898 Frank Watson, a gold prospector, settled his family on Fish Lake. Some time later, the lake was renamed to honor Watson. Watson Lake was one of the airbases on the Northwest Staging Route used for refueling and supply distribution during World War II. The Airbase was built in 1941 and later in 1942, was connected by the Alcan Highway to the other bases along the staging route. Opening a post office is a major event in establishing a community, for Watson Lake that happened in 1942. As a major supplier for mining and forestry, Watson Lake has more than 1,500 residents. 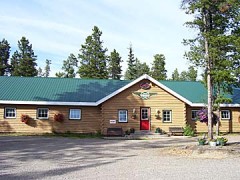 Time, elements and vacancy took their toll on the Watson Lake Airbase. After WWII, the bases used as part of the Northwest Staging Route were no longer needed. While improvements were made on the highway that connected the bases, nothing was done to maintain the bases themselves. One building that had served as a barracks on the base was moved closer to town. After it sat vacant for many years, new owners refurbished the exterior and remodeled the interior then opened for business as the Air Force Lodge.

Watson Lake’s climate provides more precipitation than in other parts of the Yukon, thus making the area producer of large trees. With adequate water, white spruce grows straight and tall and is decay resistant to a very old age. The lodge pole pine evolved from the northern pine and can withstand extreme cold and grow at high elevations and thrives in the short growing season with 24 hour daylight. Elevation is 2,265 feet. The hottest temperature ever recorded was 93 degrees Fahrenheit and the coldest was -74 degrees. I wonder how many places in the world can boast a 167-degree temperature range. Watson Lakers expect nearly 8 feet of snow each year and about 10 inches of rain. Thanks to the Milepost and Wikipedia for this information. 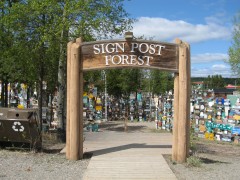 When it comes to the Sign Post Forest, how could a homesick G.I. know what he started back in 1942? During the construction of the highway, a sign posting distances to various points along the road was damaged. Private Lindley was given the job of repairing the sign. He did so and added a sign pointing to his hometown in Illinois. Others followed Lindley’s example. The single post has turned into a two-acre forest of over 65,000 signs with 2,500 new signs of every shape, size and color added every year. It’s a major attraction along the highway. To read more about the Sign Post Forest and Watson Lake, check out explorenorth.com.

Well, there you have it – some information on Watson Lake in the Yukon Territory and the Sign Post Forest, a major attraction along the Alaska Highway. Stay tuned for the final segment of Trail to Alaska.