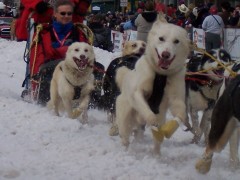 Musher, handler, and even the kids in the family wear BIG boots out in the dog yard during the winter. I hear they wear boots to keep their feet warm and prevent a bad thing know as frostbite. I’ve seen pictures of Iditarod dogs wearing tiny little sock like things called booties. We sometimes wear booties in Wisconsin, too, but I want to tell you, my feet NEVER get cold. So what’s this all about?

As it turns out, there are a couple of very good reasons. For one thing, booties are used to protect a dog’s feet from being scraped up. Cold snow and ice are very abrasive and rough – equivalent to rough cement or blacktop. That’s why humans wear shoes when running and playing outside – to protect the bottoms of their feet. Then there is the ice ball issue – snow gets caught around the pad of the foot and between the toes and it turns to ICE balls. Ice balls are so annoying! Think about having a blister, scrape or cut on your foot or having a tiny rock in your shoe – OUCH! So it is for the dogs but booties protect their feet. 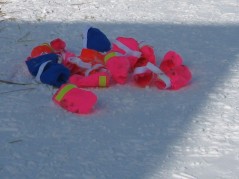 If it’s not the booties that keep a dog’s toes from getting frostbite, what does? My vet friends told me that we’re just built better for playing outside in the cold compared to humans. Dogs have fur on their feet, humans don’t. The bottom of a human’s foot is very TENDER whereas a dog has thick tough almost leather like skin that covers their foot pads. Dogs have a higher body temperature – 100 to 102.5, compared to 98.6 for humans. The resting heart rate of a dog is in the range of 100 to 102 beats per minute so blood circulates faster. In addition, dogs burn calories very quickly – their metabolism is much higher than a humans.

Experts like my vet friends think that dogs and other animals that live out-of-doors have a different circulatory process than humans. When humans are in McGrath and the temperature is minus 36 degrees, blood vessels in the arms and legs contract to restrict blood flow to the limbs. This helps humans to maintain core body temperature. When sled dogs and other animals run into extreme cold, circulation in their legs stays constant or perhaps increases. Outdoor animals may even have more blood vessels in their legs and feet. Dogs and other animals have these natural adaptations to their environment, survival mechanisms to allow their feet to stay warm in very harsh winter conditions.

Now you know why dogs wear booties when training and during Iditarod. They wear booties for much the same reason humans wear socks – to prevent abrasions and keep their feet happy. You also know something about the natural adaptations in animals that allow them to stay warm in even severe winter conditions. Without these handy survival mechanisms, you humans will just have to wear warm boots and socks along with mittens and hats.

Sled dogs are built better for cold weather than our mushers and handlers.

It’s a fact that dogs are better suited for mushing than humans. Take for example in 2010 out in McGrath – a new record low for the day of minus 36 degrees was set when Iditarod was in the village.  Canine paws withstand severe temperatures but honestly, the humans – how do they keep their feet warm? Let me tell you about the boots people wear to keep their paws – oops, I mean feet – warm out on the Iditarod Trail. 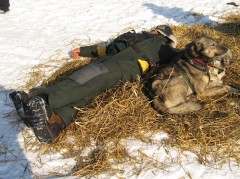 Many mushers, volunteers, and veterinarians wear a boot called the Trans Alaska Boot. The features that make it a great boot are the three inches of cold blocking insulation between the foot and the ground, the removable liner that reflects heat inward, the wicking insoles and its breathability. Ask veteran mushers like DeeDee Jonrowe, Jeff King, or the many other mushers who have worn this boot and they’ll tell you how warm and dependable these boots are. There are a couple of drawbacks that come along with the warmth though – these boots weigh a lot and aren’t quick to get in and out of. 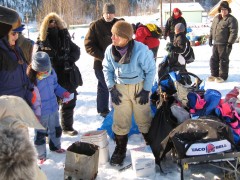 Once out at Ruby, DeeDee told some of the children who were hoping to get her autograph a story about the boots she had on. There are two pairs of the Trans Alaska boots in the Jonrowe household. DeeDee wears a size seven and husband, Mike, wears size elevens. Somehow, the incredibly organized and super prepared DeeDee packed the wrong pair of boots. So there she was in Ruby, after passing down the Happy River Steps and through the Dalzell Gorge, wearing her husband’s boots that were four sizes too big!

Another type of footwear used by people on the trail is a mukluk. Mukluks are made from moose hide, are extremely warm, wonderfully breathable, very flexible and almost as light as a feather. They have removable felt liners and insoles. There’s enough room in the mukluk to add extra felt insoles to boost the amount of insulation between foot and snow.

The Norwegians prefer a boot called a Lobben. Lobbens are made of felted wool and are very light as well as breathable. These favorite boots of Norwegian mushers and mukluks are often paired with an overshoe manufactured by NEOS. The overshoe adds some warmth but more importantly, it’s waterproof. Mushers have to be prepared for overflow and damp conditions just as they have to be prepared for extreme cold. 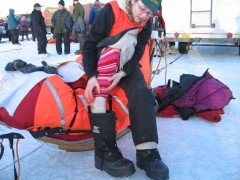 Socks also play a key role in keeping human feet happy. The key feature of a good sock is its ability to wick perspiration away from the foot. Wool socks, not the itchy ones, but merino wool socks are by far the favorite of mushers, volunteers and spectators out along the trail. People who are serious about keeping their feet warm will leave socks with any cotton content on the store shelf. Cotton absorbs and retains moisture that eventually will make the feet cold. Wicking socks transports sweat away from the foot to the outside of the sock where it passes through the boot liner and then down through the insoles and that’s about as far away as perspiration can get from the foot while wearing boots.

Trail boots should be just the right size – not too big and not too small. A little room allows for an enhanced insulating effect and proper foot and toe movement. Boots that are too tight will diminish circulation and that’s the number one cause of cold feet.

Mushers and trail volunteers carry a supply of foot warmers to help keep their feet warm in the coldest of the cold. This environmentally friendly, non-toxic, odorless heat source is made of natural ingredients and they aren’t combustible. Skiers and hunters use warmers extensively.

Well there you have it, some information on what humans do to adapt to trail conditions and keep their feet happy for the Last Great Race. Who are the Norwegian mushers over the last ten years that might have worn Lobben boots? How about this year, are there any Norsk mushers who might be wearing Lobbens?

Let PRIDE be your guide – Personal Responsibility in Daily Effort.