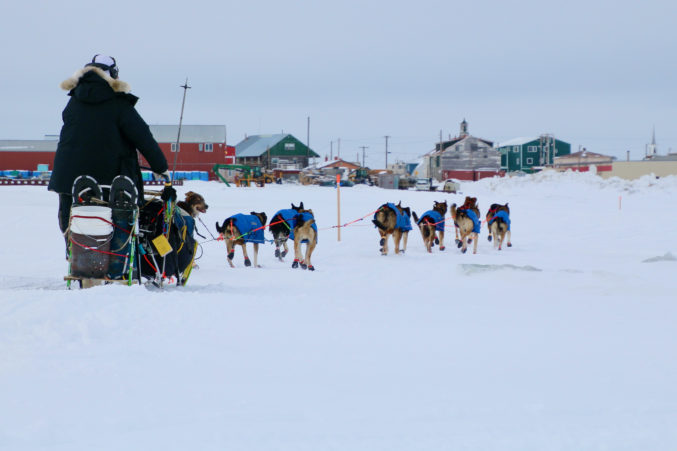 The trail from Kaltag to Unalakleet (YOU-na-la-Kleet) follows a portage trail used by the Athabascans of the interior to travel to the Bering Coast to trade with the Inupiaq Eskimos.  Russians also used the trail in their exploration and trading activities. Just 15 miles out of Kaltag, the mushers climb to 800 feet above sea level at the summit of the portage which runs through the Nulato Hills.  In Iditarod Trail Notes, Don Bowers warns the mushers that ground blizzards and other storms can blow up in a minute on the western side of the summit.

There are a couple of  Bureau of Land Management (BLM) cabins on the way to UNK.  One is in the Tripod Flats area and the other is near the Old Woman River.  Basic bush etiquette requires that any firewood used at cabins like this be replaced before leaving.   If a team stays at the Old Woman Cabin, the musher must leave some food.  Legend has it that unless you leave her something, the old woman’s ghost will chase you to Nome and bring you bad luck. 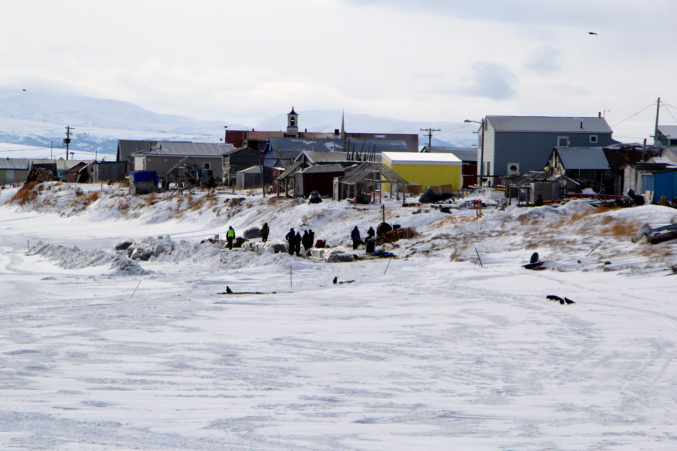 Having passed the Old Woman Cabin mushers may be able to see the Unalakleet airport beacon flashing green then white at night.  This is a good sign as it means it’s not snowing on the rest of the trail to UNK.  It’s interesting that early airmail pilots used to fly in all kinds of weather using beacons like this to find their way.  The closer a team gets to UNK, the more likely they will encounter blowing and drifting snow.  Don warns the mushers to be very careful and navigate from marker to marker to avoid losing the trail as DeeDee Jonrowe did in 2006.  She was a few minutes behind leaders, Jeff King and Doug Swingley coming over the portage and heading to UNK.  Just a few miles out of UNK, she left the trail and lost three hours getting back on track and finally into UNK. 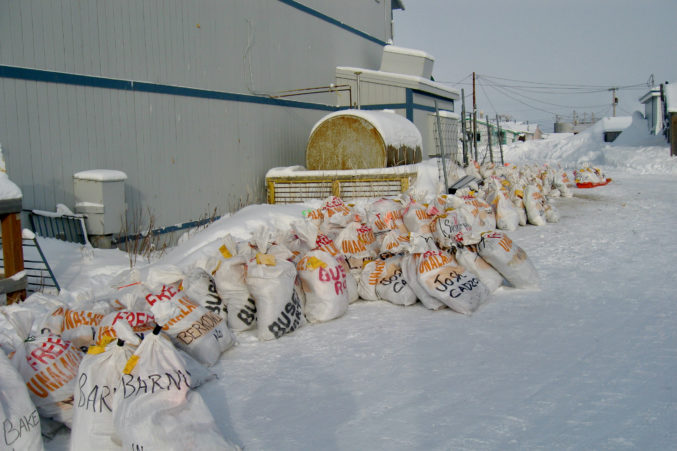 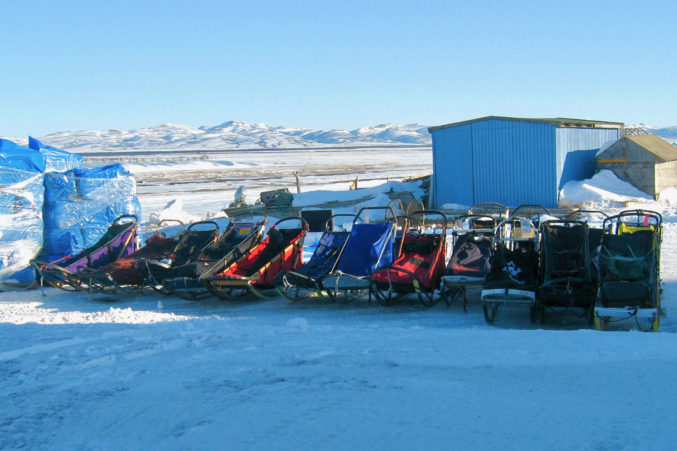 Sleds Shipped by Mushers to Unalakleet for use on the Coast (Photo Credit: Terrie Hanke)

Unalakleet, pop. 750, is on the Norton Sound, an inlet of the Bering Sea.  The sound was explored by Captain James Cook in 1778.  He named the inlet after Sir Fletcher Norton, Speaker of the British House of Commons.  Unalakleet is an Inupiaq word that means where the south wind blows, the southernmost point or the southern side – it depends on the resource. The village lives up to the name. The people are accustomed to winds sometimes stronger than 40 miles an hour and gusting higher than that. They live with the wind on a daily basis. 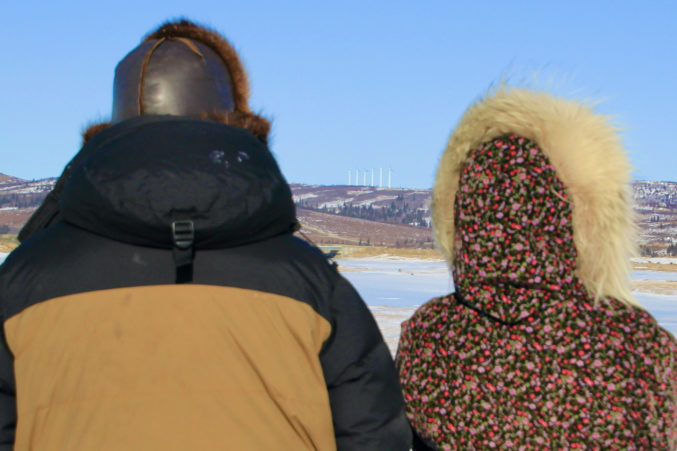 Unalakleet has invested in wind to produce electricity for the village.  Clearly visible, six wind turbines stand on the hill a couple miles outside the community .  It was a large investment but pays huge dividends in saving thousands of gallons of diesel fuel, thus saving thousands of dollars in transportation  fees to get the fuel to Unalakleet.  The turbines generate 25% of the village’s power saving roughly 70,000 gallons of diesel annually.  Unalakleet and other rural Alaska villages where wind is abundant and free serve as shining examples to the world of how small power grids are effective in isolated communities.

The community of Unalakleet lies between the homelands of two Eskimo cultural groups.  The Inupiaq live to the north and the Yupik live to the south.  With its trees, tundra and hills, Unalakleet is a very beautiful place.  It’s on the Bering Sea next to the large clean Unalakleet River.  Being known for its fishing and scenery, tourists often visit Unalakleet. 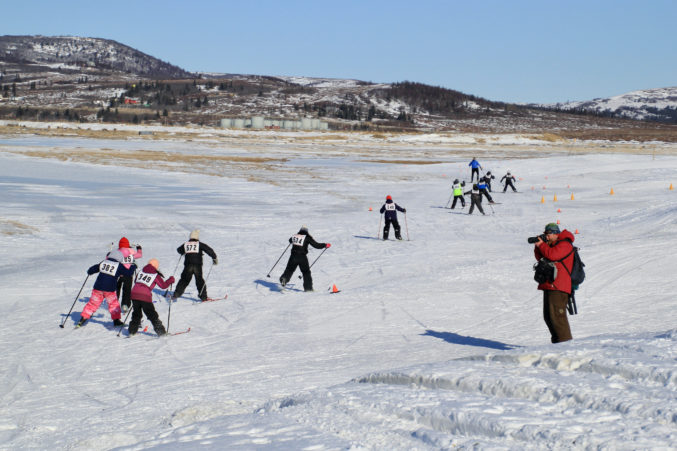 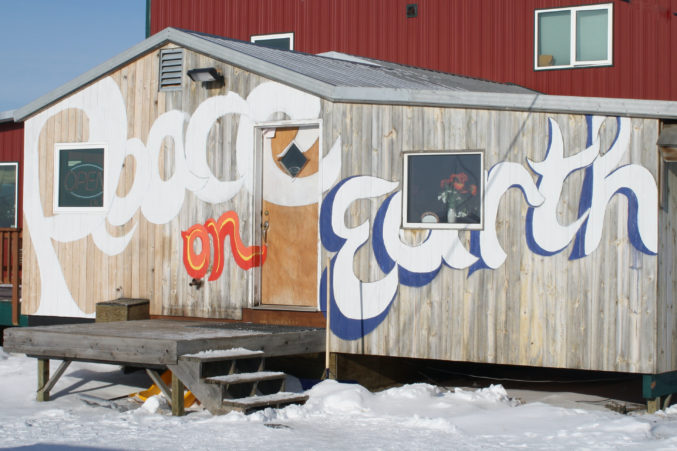 The local economy is very active.  There are many jobs in fishing, air cargo, education, construction and government.  The people fish many species of salmon, hunt seal, caribou, moose and bear and pick berries as a part of their traditional subsistence lifestyle.  Winters around UNK are cold and dry.   Most of the houses in UNK are connected to the water and sewer system.  Electricity is provided by the Unalakleet Valley Electric Cooperative.  The airport is served by daily flights from both Anchorage and Nome. There are two stores, several churches, Brown’s Lodge/Hotel that serves delicious burgers, the Igloo that specializes in burgers and espresso drinks and Peace on Earth which is well known for pizza and sandwiches.  .  The recently built Annikan Clinic is an important regional health facility.  To get around, locals mainly use snowmachines and 4 wheelers although there are a few pick-ups and SUV’s.  If you order a pizza from Peace on Earth, it’ll be delivered by 4-wheeler. 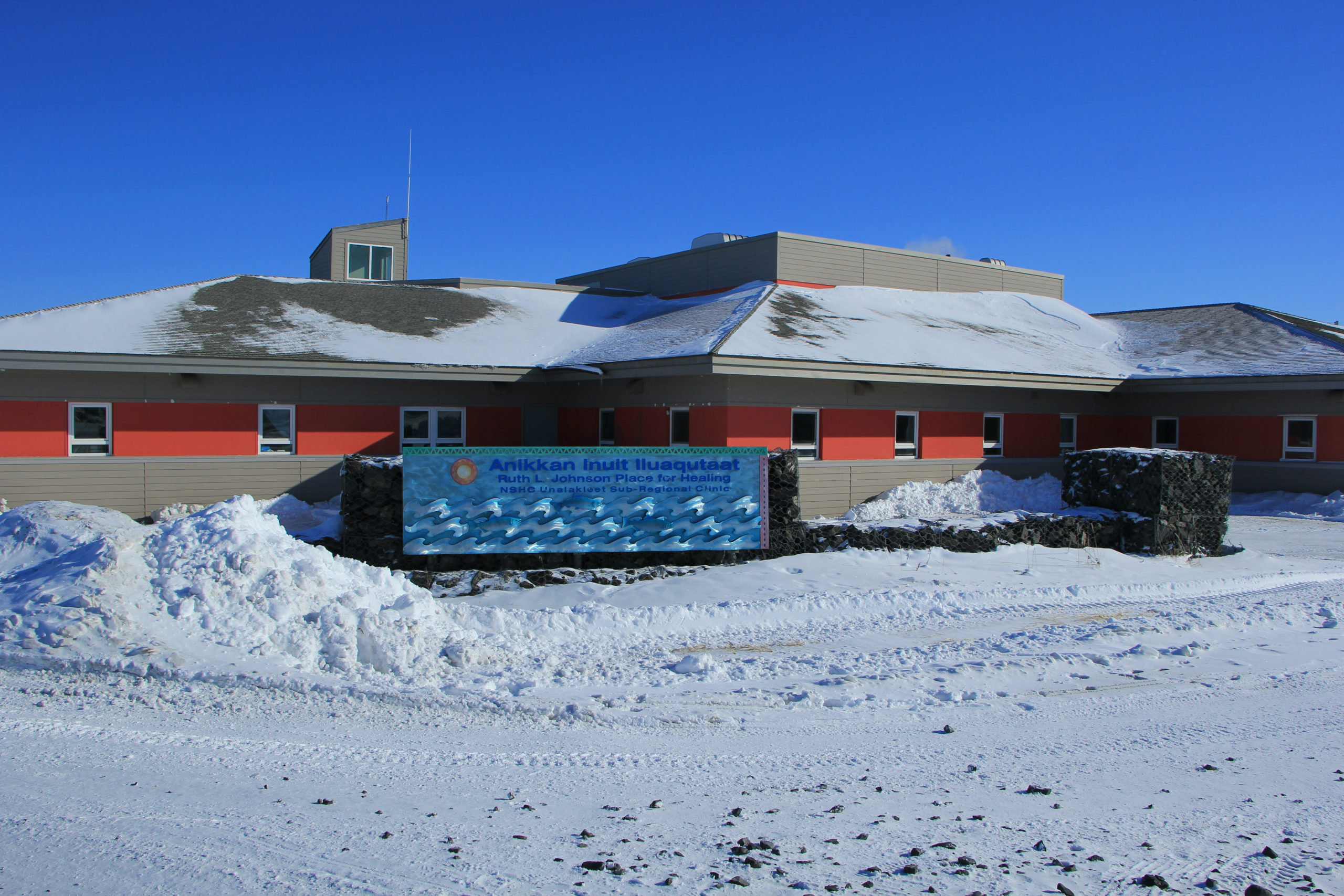 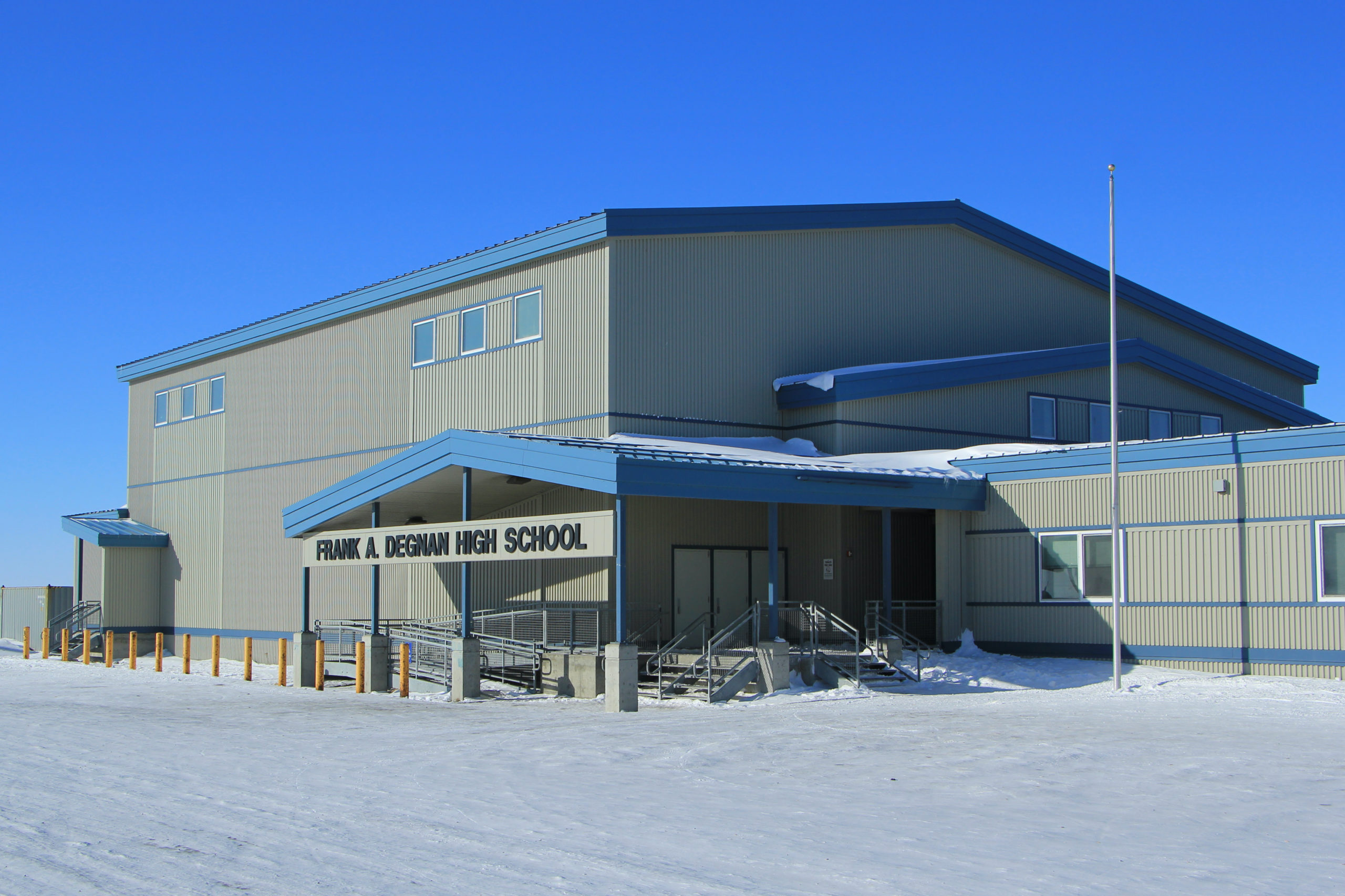 Back in 1887, the Swedish Covenant Church opened up a mission in UNK which provided schooling.  In 1954, the Evangelical Covenant Church opened a boarding school.  That school was open to students from all around western Alaska where schools didn’t exist.  The boarding school operated for 30 years then closed when schools were built in most villages around the area.  Today, the UNK school system, is attended by nearly 200 students.  The mascot for the Frank A. Degnan Senior High School is the Wolfpack.  Having won 6 state basketball championships, the people of UNK are very serious fans and players.  The Biathlon (skiing and shooting) team is a strong contender in conference and state competition.

The first musher to reach Unalakleet, the first checkpoint on the Gold Coast, receives gold nuggets and a carved ivory dog team from Ryan Air.  The award was previously presented by Wells Fargo Bank of Alaska.  The checkpoint is in the newly remodeled community building.   Food is served to all mushers and is either hot off the grill sourdough pancakes, eggs and bacon or delicious stews and other dishes brought in by community residents.  Teams are parked just outside the checkpoint on the frozen Kouwegok Slough.  Snow is piled into high berms that act as wind breaks for the sleeping teams.

The local church always sponsors a pie social when the race comes through town.  There are so many varieties of pies, it’s tough to choose so having a couple of pieces is a good strategy.  Unalakleet has a very active learn to ski program that runs all winter.  Kids of all ages learn the sport and many go on to participate on the Biathlon team.  During race week the ski coach organizes a citizens ski race.  Young skiers and old skiers alike are welcomed and participate in age group competition.  It’s a must see event and takes place on the far side of the slough from where the teams are parked.

Well there you have it – history and information about the Unalakleet to Kaltag Portage Trail and a glimpse of life in UNK.   Next, we’ll hear about Shaktoolik.  Stay tuned and in everything do your best every day and have a plan.