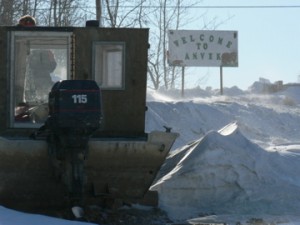 Leaving Shageluk and mushing on toward Anvik, the teams will have fewer miles to go than they have covered.  No one would be so bold as to say that it’s downhill to Nome from Shageluk because the Yukon River and the Bering Sea Coast present many challenges for the mushers and dogs.  Anvik (AN-vik) is the first checkpoint of the southern route on the famous Yukon River.  Tradition has it that the church bell is rung to announce to all that the first team has reached the mighty Yukon.

Whether it be the northern or southern route, there is a special award for the musher reaching the Yukon River first.  The Millennium Hotel, race headquarters in Anchorage, sponsors the First to the Yukon Award.  After the dogs are fed and bedded down, the musher is treated to a delicious seven course meal prepared and served by the Millennium Executive Chef.  In the rustic checkpoint building, a formal dinner table is set complete with fresh flowers, crystal, fine china and silver candle sticks.  The chef prepares the meal on a two burner camp stove.  The dinner served last year in Ruby included chicken and mushroom terrine, potato bisque with shrimp ravioli for appetizers followed by the main course of halibut and a beef fillet stuffed with king crab, asparagus and blue cheese.  Raspberry crepes were served for dessert.  Just like eating in a fine restaurant, an after dinner mint is served – in 2008 the mint was 5,000 freshly minted one dollar bills presented in a gold pan.  Handler helped me find this description of the 2008 First Musher to the Yukon Meal on the Iditarod Website in the sponsor section.

Being a sled dog who eats only the best dog food, I’ve never tried any of the dishes served last year in Ruby.  Have you?  I don’t even know what terrine or bisque is.  Do you?  Would you like to try shrimp ravioli?  I think it would be fun to plan the menu for a festive dinner like this.  Why don’t you give it a try.  Keep checking the sponsor’s section of the Iditarod website to see what the menu will be for the First to the Yukon dinner in Anvik this year. 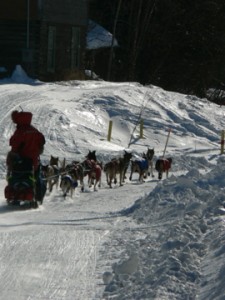 Over the years, Anvik has been known by different names – American Station, Anvic, Anvick, Anvig and Anwig.  These names more than likely came from Russian Explorers.  Way back in 1887, an Episcopal Mission/school and church was built near where the Anvik River flows into the Yukon.  Anvik’s first post office was built around 1900.  Sad to say that there were two flu epidemics back in 1918 and 1927.  Many children were orphaned and were taken in to live at the Anvik Mission.  At that time, the population of Anvik was around 700.  Today, there are 94 people, mostly Athabascan that live in the village.  Twenty-five students attend the K-12 Blackwell School.  Like other bush villages, there are no roads leading to Anvik but the Yukon River is a major water highway.  People and supplies travel by boat or bush plane to the village.

Living in Anvik, you’d experience 150 sunny days each year and a 100 days of precipitation.  Eighteen inches of rain falls on the village along with seventy-six inches of snow during the year.  Summer temperatures are pretty cool – the July high is 67 degrees.  The average January temperature in -7 degrees.  While that doesn’t sound as cold as some of the previous checkpoints, the Yukon River can be blasted by wind so on any given day, they windchill can be severe.

The trail from Shageluk to Anvik is a well used village to village snowmachine route.  Most of the trail runs over lakes, swamps, sloughs and a little tundra.  The trail is considered easy but there are a few steep climbs up banks of sloughs and some narrow trail in the heavy timber along the Yukon River.  Upon reaching the Yukon river, Anvik sits on the far side behind a high bluff.  At the crossing, the river is a mile wide.  Teams travel down the main street of Anvik to the community center where the checkpoint is located.  All of this information is courtesy of Don Bower’s  Trail Notes.  He also says that hospitality in Anvik is excellent but it’s only 18 miles north to Grayling so many teams continue on through.

Well, there you have it – information about the First to the Yukon Award, the history and climate of Anvik and the trail leading from Shageluk to the might Yukon.  Next Handler will tell us about the checkpoint of Grayling.  After hearing about all that great food prepared by the Millennium Chef, I’m getting hungry.  I can’t wait to see what’s for supper tonight!  Stay tuned and remember in everything do your best everyday and have a plan. 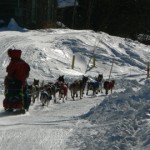 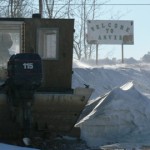 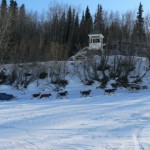 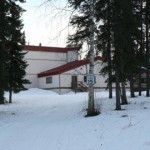 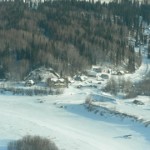 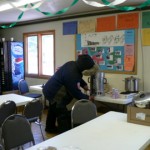 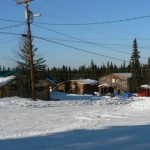 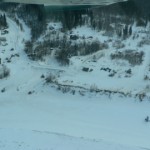 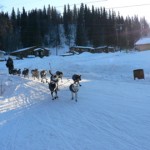