One day this fall, Handler came into the dog yard and said, “Hey big dogs, do you want to hear about Anchorage and the Ceremonial Start?”  We answered, “YES” with a loud and enthusiastic howl.  Handler sat on the roof of my doghouse and this is what she told us. 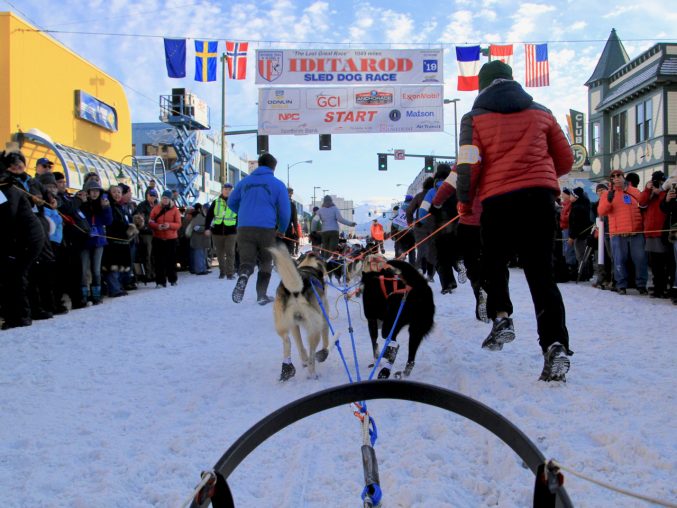 On the first Saturday morning of March, Iditarod begins at 10:00 in Anchorage with a Ceremonial Start.  The Ceremonial Start gives newspaper and television reporters along with Iditariders, sponsors and spectators a chance to get close to the mushers and dogs and to be where the action is.  This all begins around 4th & “D” Street in the middle of downtown Anchorage.

Here are a couple of questions I had – is it dark and is there snow for the dogs to run on?  The sun is up by around 8:00 am and it stays light until almost 6:30 or 7:00 pm.  About snow – whenever it snows in Anchorage, the snow is scooped up and hauled away to be stock piled.  On the night before the race, workers truck tons and tons of snow into downtown to cover the streets and create a trail for Iditarod. Handler says it’s amazing to have bare blacktop on Friday afternoon and then have snow covered streets on Saturday morning without even a flake of snow falling! 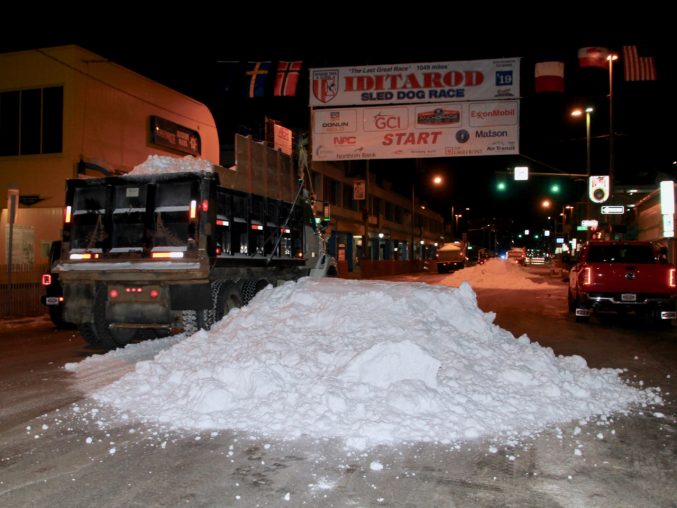 Snow delivered to 4th Avenue to build the trail in downtown Anchorage.

By early Saturday morning, the teams are all lined up on the side streets along 4th Avenue.  Imagine having 60 teams – that’s 60 trucks with 60 dog trailers, 2 sleds for every team and how many dogs would that be if each team can run 12 dogs – more than 700!  How many dogs for 80 mushers, how many for 96 mushers?  A few hundred volunteers help to keep things organized.  Each team has 14 handlers who help the musher bring the team to the starting line. The teams start at two-minute intervals.  Every musher and Iditarider are introduced and then their countdown begins, 5-4-3-2-1-GO! 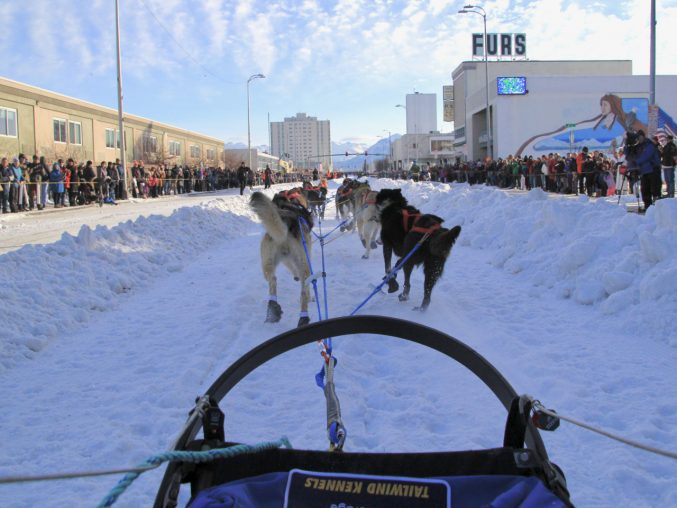 Spectators cheer for mushers at the Ceremonial start.

There are thousands of spectators who line the 11-mile route that eventually leaves the city streets and continues along the beautiful Anchorage trail system.  In the early years of the race, the Ceremonial leg of the race went 22 miles to Eagle River and was included in the recorded time but not anymore.  Time doesn’t start until the Restart at Willow. 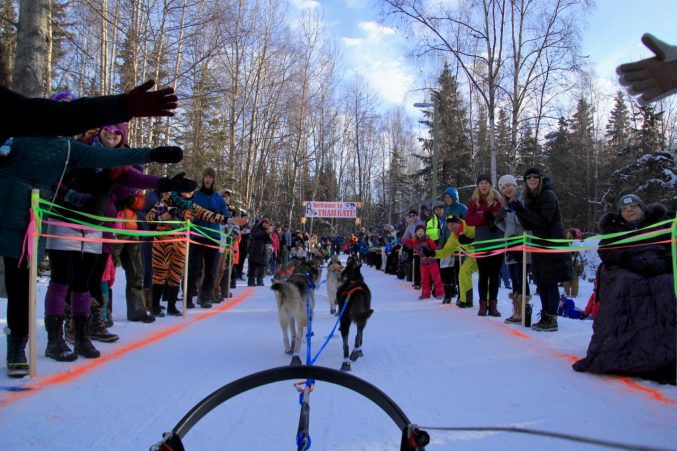 We all were curious about the Iditarider – what’s that?  Iditariders are people who bid in an auction to win a ride in a musher’s sled for the 11-mile Ceremonial Start.  Can you imagine riding 11 miles with Martin Buser, Aliy Zirkle, Thomas Waerner or even a rookie musher?  Wouldn’t that be great?  The money earned in the Iditarider Auction is used by the Iditarod Trail Committee to cover the expenses of the race. 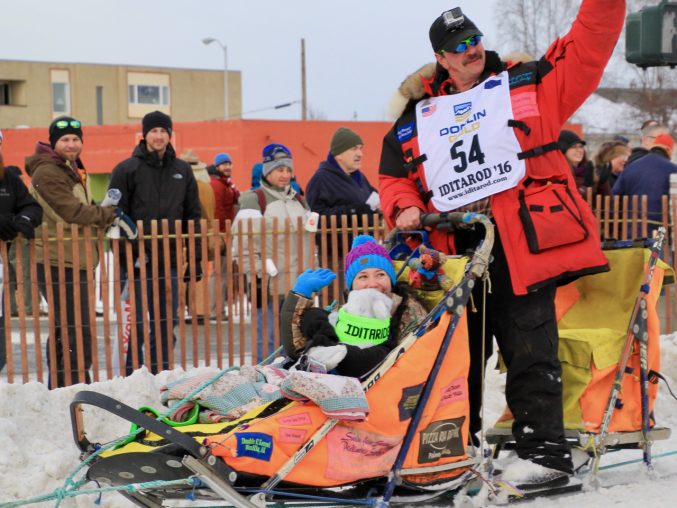 I had a little free time after Lead Dog School one day so I decided to check Wikipedia for some information about Anchorage.  This is what I learned.  About 288,000 people live in Anchorage – it’s the largest city in Alaska with 40% of the state’s population.  One might expect that Anchorage would be the capitol of Alaska – not so, it’s Juneau.  The Municipality of Anchorage is actually larger than the state of Rhode Island.  Anchorage was founded in 1914. 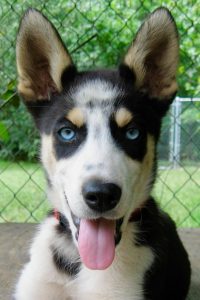 In March for the Ceremonial Start of Iditarod, spectators, mushers and dogs can expect the low temperature to be 19 and the high to be 33 degrees Fahrenheit. Average snowfall in March is close to 10 inches.

How does Anchorage’s temperature and precipitation compare to where you live?  How about hours of daylight?  What kinds of wildlife are common to where you live and Anchorage?  Like I did, you can go to Wikipedia to learn more about the City of Anchorage and do many comparisons with where you live.