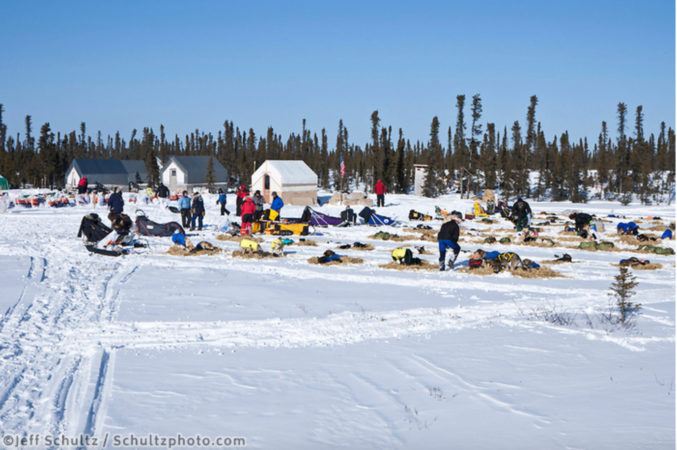 Having Iditarod come through your village requires an enormous amount of work but on the other hand, it provides a lot of excitement. So to ease the burden on the villagers and spread the thrill around, two routes were created. That’s a lesson in sharing on a very large scale! Another reason is that it provides variety for the mushers as they plan their strategies, buck the winds, endure the elements and absorb the scenery. Finally, the race has to be at least 1000 miles long. Going straight from Ophir to Kaltag would shorten the route by 150 miles and have you looked at the map? There is nothing, absolutely nothing, between Ophir and Kaltag. By using the northern and southern routes, the trail goes through established villages. 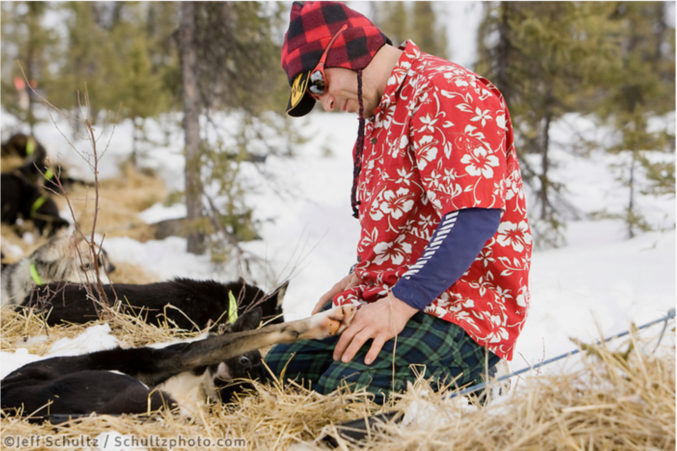 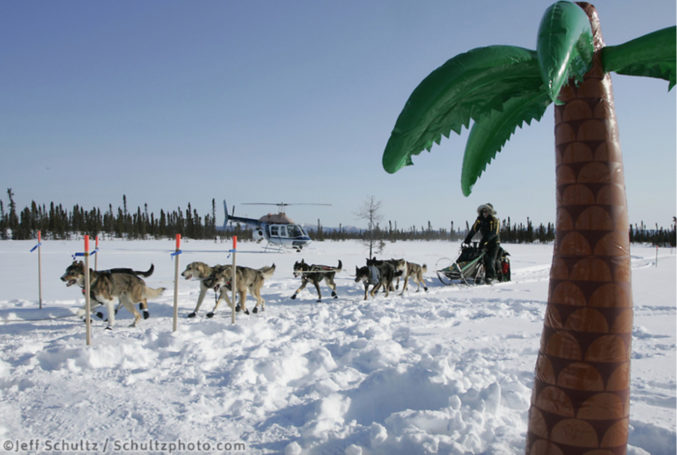 The trail from Ophir to Cripple runs along the Innoko River. It’s mostly woods with a few open areas but best of all, it’s pretty flat without any tricky sections but it’s possible for even experienced trail veterans to take a wrong turn. Handler told us this story about DeeDee Jonrowe and Paul Gebhardt from 2008. Gebhardt and five other mushers left Ophir before DeeDee. She passed a few teams resting along the trail but did not pass Paul. At one point she noticed there were no tracks in front of her on the trail and she wondered where he was or how long ago he had gone through so that his tracks had dissapeared.  When she arrived in Cripple, DeeDee received an enthusiastic greeting and congratulations.  As the first musher to reach the half-way point, she was presented with the GCI Dorothy Page Halfway Award of $3,000 in gold nuggets.  Jonrowe was dumbfounded! How could I be first, come on, where’s Paul Gebhardt? A short time later, Paul arrived in Cripple, very glad to be there. This run from Ophir had been the worst run of his life and might have taken him out of the winner’s circle – he’d carried a dog in the sled, got soaked in the wet snow, ran into overflow and had gotten lost!

Today, Cripple, population zero, isn’t a village; it’s only a place on the Innoko River in the former Iditarod Mining District. The checkpoint takes its name from an old steamboat landing located nearby on the river. During the Gold Rush between 1908 and 1925, $35 million in gold, including some of the largest nuggets ever mined were taken from the area. It’s always a guess as to exactly where the checkpoint will be located. It’s dependent upon overflow and other surface conditions. Generally, it’ll be somewhere near the Poorman airstrip. Don Bowers in Trail Notes mentions that abandoned buildings, trucks and bulldozers still sit near the airstrip. The Cripple checkpoint is a maze of tents amongst inflatable palm trees where mushers either experience frigid cold in extreme winter gear or enjoy sunny warmth while wearing Hawaiian attire.

Well, there you have it – some information about the trail running north out of Ophir and the Cripple checkpoint. You can read about all of the checkpoints in my earlier Virtual Trail Journey series. Stay tuned for my story about Ruby. Remember, in everything to your best every day.