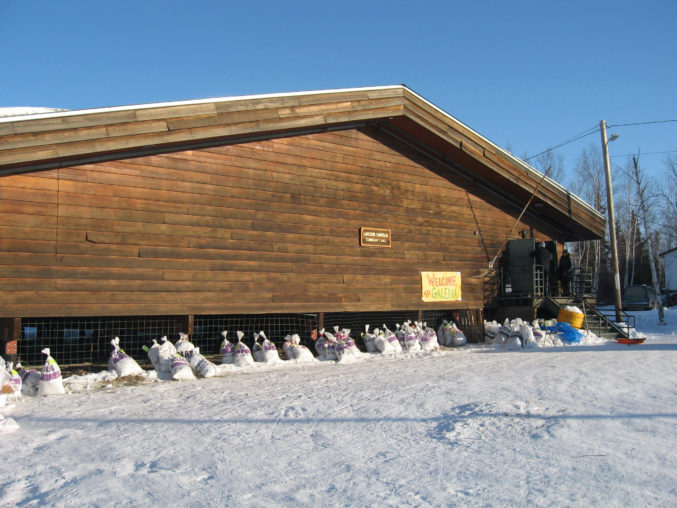 Leaving Ruby, Mushers travel 50 miles down the frozen Yukon River to the village of Galena.  The first town site of Galena was established in 1918 near a native fish camp called Henry’s Point.  It was one of many fish camps located on the Yukon River. Athabascans in the area were nomadic.  The location of their spring, winter, fall and summer camps was dictated by where and how the wild game was migrating.

The town became important as a supply and transportation hub for the lead ore mines. Athabascans living a few miles upriver at Louden moved down to Galena to harvest and sell wood to the steamboats for fuel and also hauled freight for the mining companies.  The first school opened in the mid 1920’s followed by a post office in 1932.  Growth in the area was sparked by military installments built during WWII and later.

Devastating Yukon River floods prompted the residents to move their town to a higher dryer location about a mile away from the first town site.  Galena derived its name from the mineral found with lead and silver ore.

Currently, Galena is a town of over 700 people and serves as the transportation, government and commercial center for the western Interior.  While some folks still rely on a subsistence lifestyle, most are employed in government, transportation, health care, education, retail, construction or firefighting jobs.  In 1993, one of the Air Force bases closed and shortly thereafter was reopened by the Galena School District as the Galena Interior Learning Academy, a secondary residential vocational school.  This school is for students, grades 9 thru 12, who don’t have access to a high school where they live and who desire a topnotch educational experience.  Students completing their education at GILA leave with a high school diploma and vocational certification in areas such as Culinary Arts, Cosmetology, Technology, Small Engines or Fire Fighting. 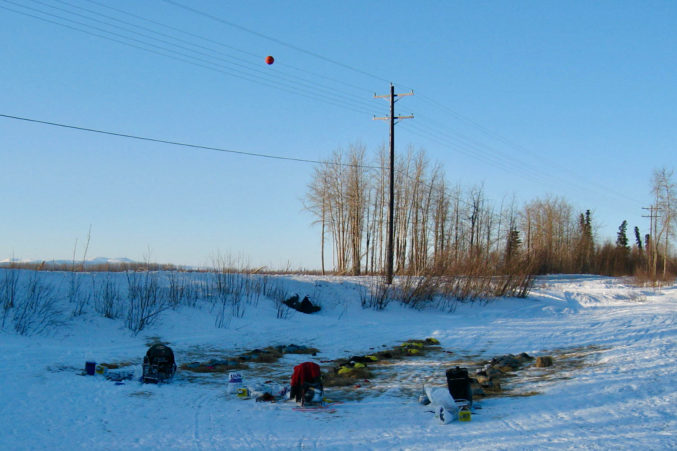 Teams Rest During the Early Morning Hours in Galena

The K-12 school in Galena is named after revered Athabascan Elder, Sydney Huntington.  He has served on the local school board for many years and believes that education is extremely important for today’s youth.  Without educating village youths, there will be no future for the villages or the people.  He encourages people in the villages to become educated and move beyond subsistence living.  Handler was fortunate to leave Galena with an autographed copy of Shadows on the Koyukuk by Huntington.  In the book, Sydney shares stories of his childhood – a simpler but very difficult life.

The climate in Galena isn’t much different than Ruby including the extreme temperature differences.  Average July high temperatures are in the low 70’s while average lows in January range for 10 degrees to well below zero.  During the winter and often during Iditarod, the area experiences long periods of bitter cold.  Temperature extremes recorded in Galena are 64 below and 92 above.   Annual precipitation is close to 13 inches including about 5 feet of snow.

Galena is a regional transportation hub for the surrounding villages.  The airport accommodates planes with landing wheels and skies.  Barges navigate the river from mid

May through mid-October.   Autos, trucks, snowmachines, skiffs and ATVs are used for local travel.  During the winter, frozen rivers are used as highways to neighboring villages.  Speaking of transportation, Edgar Nollner of Galena was the serum runner who received the medicine from Billy McCarty, Sr. at Whiskey Creek and 1925 and carried it 24 miles to Galena.

From Ruby, teams run down the Yukon all the way to Galena.  In some sections, the river is between one and two miles wide.  The wind swept wide-open flat trail on the wide river can be challenging for mushers and dogs for a number of reasons but howling winds and boredom are at the top of the list.  It’s important to stay on the well-marked trail to avoid thin ice, overflow and open stretches of water.   The checkpoint is usually located in the community center where school children post signs welcoming mushers.