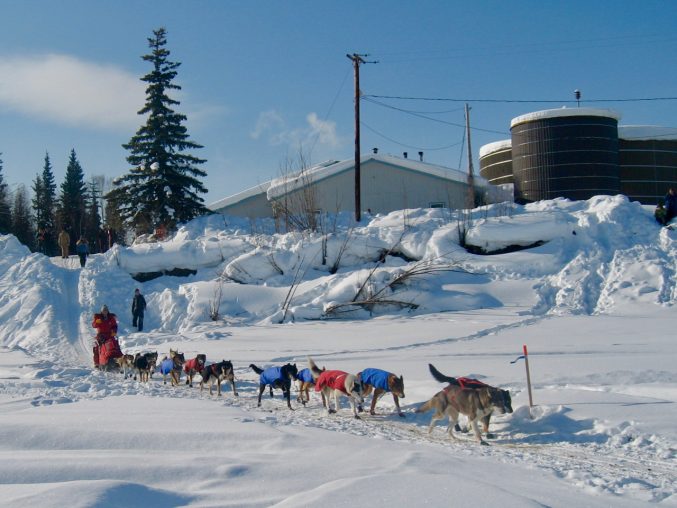 From Nikolai it’s a 48-mile run to McGrath, which is estimated to take five to seven hours.  In his Trail Notes, Don Bowers considers this to be an easy run but says it can be very boring for both the dogs and the drivers.  There are so many bends in the Big River and Kuskokwim River that seem to be identical, and so many lakes that seem to be identical, it’s as if the trail goes on and on but because the scenery doesn’t change it feels like it doesn’t go anyplace.  These river bends are called oxbows and thankfully, there are shortcuts across them.  The first musher to reach McGrath receives the Spirit of Alaska Award.  This is the first of several awards presented along the Iditarod trail. 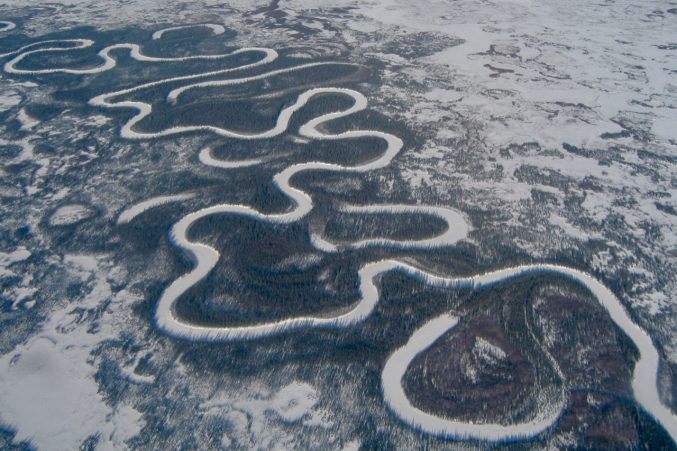 Aerial View of Twists and Bends in River known as Oxbows

McGrath has a population of322 with the majority being of White decent followed closely by Native Alaskans.  The community has many amenities.  There’s a well stocked grocery and dry goods store and very near by is Hotel McGrath, which houses a coffee shop.  There’s a café just down the road called the Iditarod Café.  There are a couple of pubs and the Iditarod Trail Roadhouse offers lodging and meals.  McGrath has three churches and there’s a public library with a museum, a new regional health clinic, a well-developed airstrip and the Cap’n Snow Community Center, which offers showers and a washeteria.  McGrath boasts running water, dependable electricity, cell phone service and Internet.

The school in McGrath has 33 students.  There are athletic opportunities for boys and girls.  Basketball is a favorite activity for all ages.  The school’s mascot is a Knight. 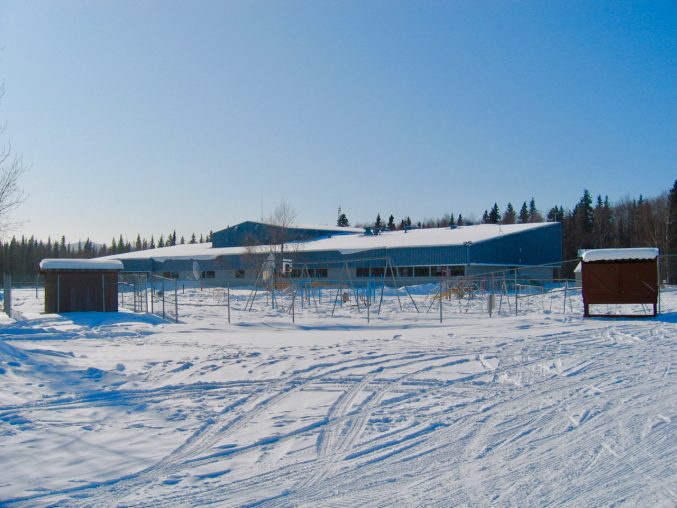 McGrath School Home of the Knights

There are no roads leading to the village so a person traveling to McGrath would arrive by plane or during Iditarod, dog team. There are some local roads and winter trails are marked for travel to Nikolai and Takotna. People and businesses in McGrath receive cargo and supplies by air.   Being a major supply center, there are many cash jobs.  Some people still rely on subsistence activities for food, hunting moose, caribou, bear and rabbits; fishing for salmon; tending gardens and harvesting berries and other wild crops. 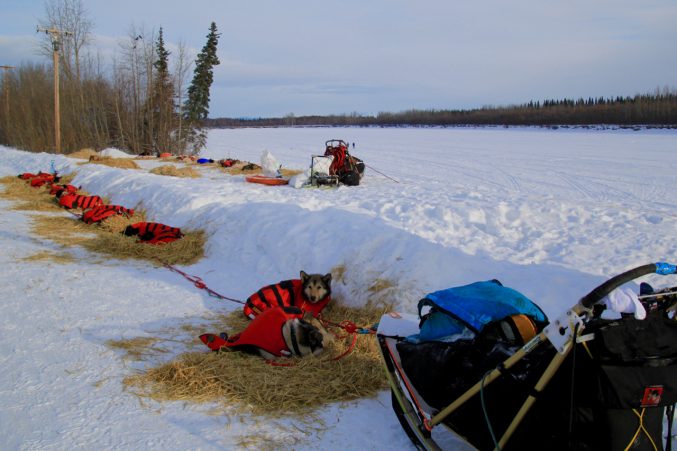 Plenty of Straw With Warm Coats and a View 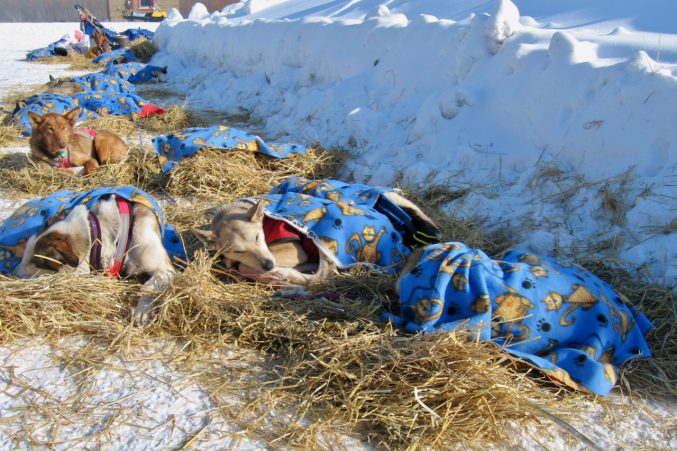 Plenty of Straw With Blankets

From Wikipedia, I learned about the temperatures in McGrath. Summer temperatures, on average, range from 36 to 76 above Fahrenheit. In winter the average temperatures run between -43 and +43 degrees Fahrenheit.  The coldest temperature recorded since 1939 is -75°F with the hottest being +94°F.  When Handler was in McGrath in 2006, the temperature was 35 degrees below zero – sort of a frosty morning for the Iditarod Air Force pilots but don’t worry about the dogs, they had lots of straw and many wore warm coats or had blankets to sleep under.  When it’s that cold, the snow talks back, “CRUNCH,” when you walk, run or drive on it.  This area receives only about 10 inches of precipitation per year including 80 to 90 inches of snow. 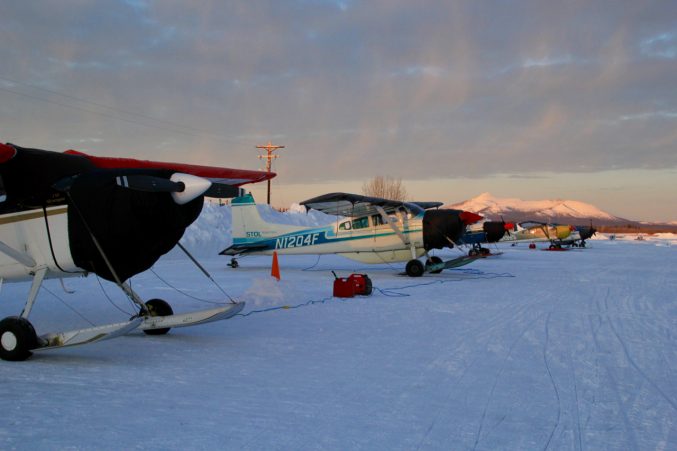 Now for a little history. Before the gold rush, McGrath was a meeting and trading place for Kuskokwim Athabascan. The Kuskokwim River was deep enough at McGrath to accommodate supply barges.  After gold was discovered in 1906, McGrath became a regional trading center.   It wasn’t until 1907 that the town was established and named for Peter McGrath a local U.S. Marshal.  From the time gold was discovered in 1906 until 1925, thousands of people walked or mushed on the mail and supply trail know as the Iditarod Trail through McGrath on their way to the Ophir gold mines in the Innoko Mining District. 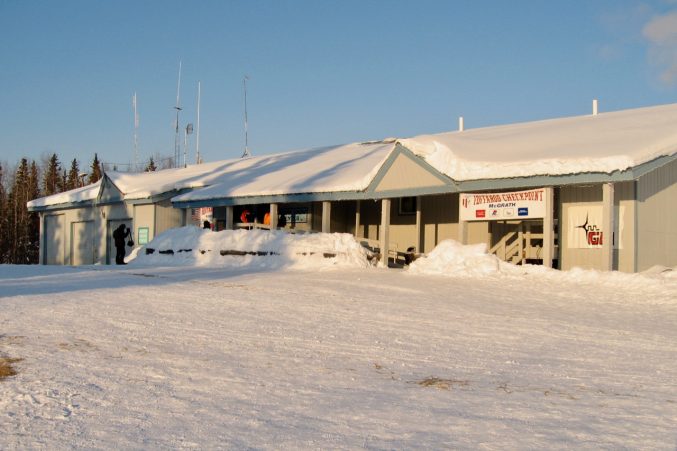 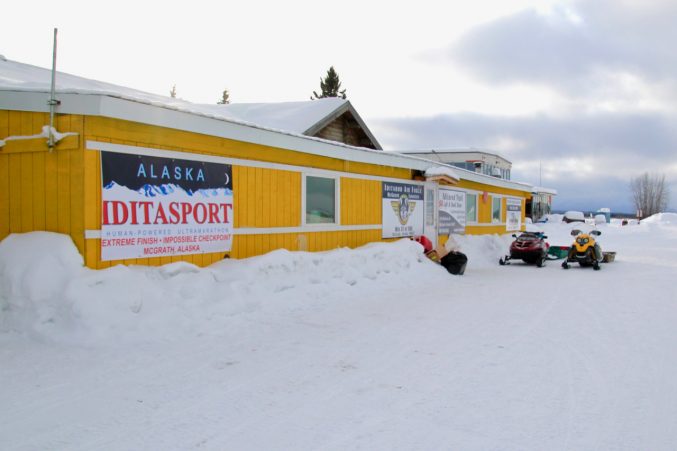 Initially, McGrath was across the river from its present location but in 1933 a major flood caused residents and businesses to move to the other bank of the river.  In 1937, the Alaska Commercial Company opened a new store.  With planes becoming safer and more reliable for delivering people, mail and supplies, an airstrip was cleared in 1940.  About that same time, the first school was built.

McGrath was an important refueling stop during World War II.  For the most part, gold mining operations in the area have been shut down for many years because of low prices.  Today McGrath is an important communications, transportation and supply center for interior Alaska.  It is one of the major hubs for Iditarod.  The Iditarod Air Force is based there while the race is in the interior.  It’s a distribution center for people and supplies as well as a collection point for returned dogs.

Well, there you have it – some history and information about McGrath, the Iditarod Trail and what it’s like to live in the village.  The next checkpoint is Takotna.  It’s rumored that Takotna is the best little checkpoint on the Iditarod Trail – handler will tell us about that village next.  So, stay tuned and remember in everything do your best every day and have a plan!