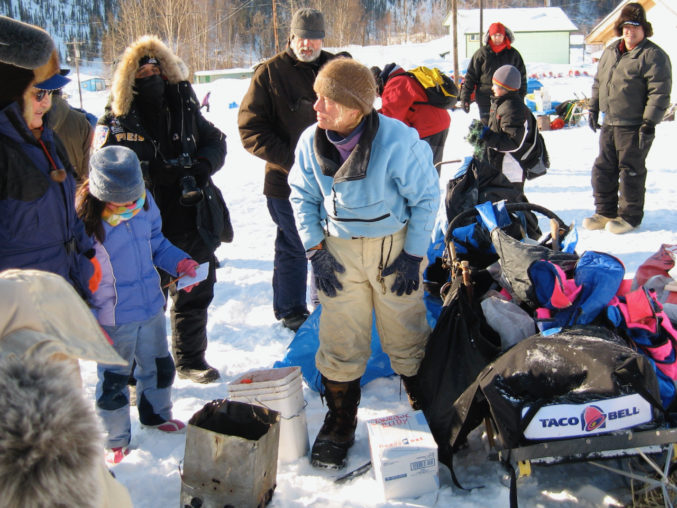 DeeDee Jonrowe talks with Children who want Autographs in Ruby

The village of Ruby is the first checkpoint of the northern route that’s situated on the mighty Yukon River.  The Lakefront Hotel, race headquarters in Anchorage, honors the first musher arriving with a delicious seven-course meal prepared by the Lakefront’s Executive Chef.  In the corner of the rustic checkpoint upon a little stage, the musher and a quest are seated at a table adorned with fresh flowers, crystal glasses, fine china and silver candlesticks.  The menu is far from ordinary musher cuisine.   Appetizers might include chicken and mushroom terrine then potato bisque with shrimp ravioli.  For the main course a musher and guest might enjoy halibut and a beef filet stuffed with king crab, asparagus and blue cheese.  For dessert, raspberry crepes might be served.  Dessert is followed by an after-dinner mint of 3,500 freshly minted one-dollar bills presented in a gold pan.  Being an athlete, I’m not a table food kind of dog but that halibut and beef filet sounds delicious.  A similar meal is served in Anvik on the odd years when the trail goes south.  You can read more about the First to the Yukon Award and all the other awards given along the trail on the Iditarod website under the Race Center tab in the Special Awards  heading.

Ruby is a village with a population of about 150.  Gold was first discovered in the nearby creeks in 1907.  Ruby was established as a supply hub for the prospectors.  Steamers had easy access to the area via the Yukon River that runs 1,875 miles from its headwaters in the Yukon Territory all the way to the Bering Sea.  During the peak of the gold rush, the village grew to 2,000 residents.  The town was named after the red stones found along the riverbanks that the prospectors thought were rubies.

Most residents are descendants of Koyukon Athabascans.  The Athabascans were nomadic and followed wild game with the changing seasons to hunt and put food on the table.  Still today, the people of Ruby depend upon wild Salmon, whitefish, moose, bear, ptarmigan, waterfowl and berries as food sources in their subsistence lifestyle.

This area of Alaska is known for its extreme temperatures.  Average July temperatures are in the 70’s.  January Temperatures average from 10 above to well below zero.  It’s not uncommon for the thermometer to drop to forty below zero and stay there for many days in a row during the long winter. The coldest temperature ever recorded in Ruby is minus 53 and the hottest is 98 above.  On average, 17 inches of precipitation fall in Ruby including over 5 feet of snow.  The residents of Ruby as well as the mushers experience the infamous harsh and relentless winds of the Yukon River.  The Yukon River is open for navigation and fishing from the middle of May to the middle of October. 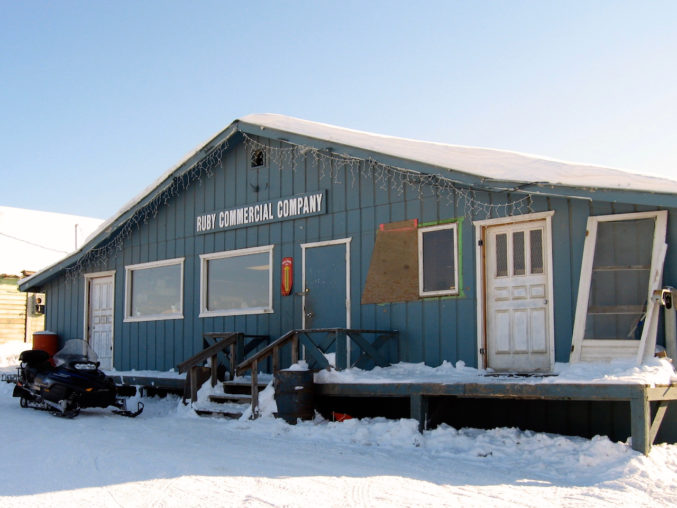 If you lived in Ruby, you’d have the convenience of two stores.  One is a general store, selling mostly food, other household essentials and some hardware.  The second store is an evening only store that sells snacks, candy, chips, ice cream goodies, pop, juice and milk and rents movies.  You might own a pair of Athabascan snow shoes made by Alaska Native, George Alberts.  Only a few houses have wells and septic systems.  Most families carry water to their houses from the washeteria and most houses are without septic systems and use an outhouse.  The village has electricity and connects to the outside world via dish and satellite.  There is one school that has 35 students K thru 12.  People and supplies arrive in or leave Ruby by airplane or barge.  To get around the village or down the only maintained outlying road to Long Creek Mine, a person would use a truck, snowmachine, ATV or riverboat. 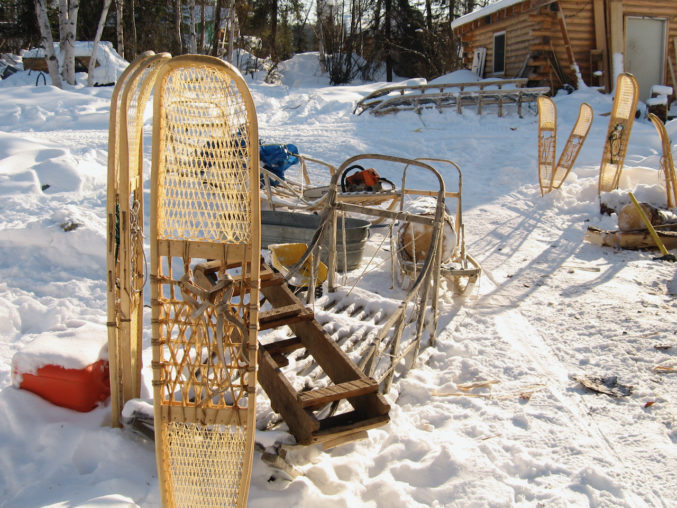 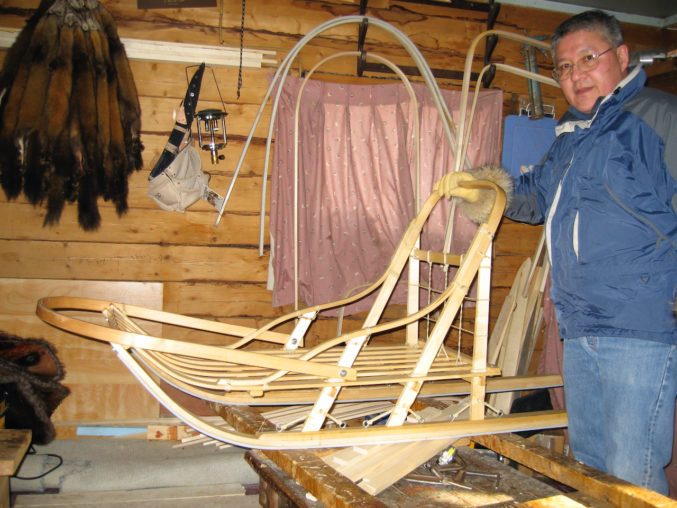 Handler said being in Ruby is like a living history lesson.  She met Emmitt Peters also known as the Yukon Fox.  Emmitt won Iditarod in 1975, the same year he won rookie of the year honors.  Of the 14 races he’s run, he finished in the top five in each of his first five races and in the top 10 a total of seven times.  No wonder he is referred to as the Yukon Fox.  When handler visited the evening/movie store and met the owner, Pat McCarty, she learned that back in 1925, his father, Billy McCarty, Sr., was the Serum Runner who transported the precious medicine from Ruby to Whiskey Creek a distance of 28 miles. When Susan Butcher flew into the checkpoint, another page of mushing history came to life.  She was receiving treatment for leukemia but was strong enough to visit a few checkpoints.  Her friends were thrilled to see her, especially DeeDee Jonrowe who shared a special bond with Susan through Iditarod and in their common fight against cancer.

The checkpoint in Ruby is located in the community center that sits high on a hill over looking the mighty Yukon River – actually the whole village is situated on a hill sloping down toward the river with most homes having a breathtaking view of the river.  You can see some great pictures of Ruby through an image search of Google.  Mushers are very happy to see Ruby as it marks the end of the longest distance, 112 miles, between checkpoints.  Most of the trail from Cripple follows a very dilapidated supply route that connected the mining districts to the steamboat landing in Ruby during the gold rush.  When approaching Ruby, mushers will no doubt see signs of welcome created and posted by the school kids.  Once in the checkpoint, the mushers will be greeted by children seeking autographs. Teams are required to take an eight-hour rest somewhere on the Yukon.  Dogs will get better rest on the river than out on the coast so it’s best to rest while there is peace, quiet and great hospitality.

Well, there you have it, lots of information about the village of Ruby and the people who call the river town home.  Stay tuned for my next report on Galena.  Remember – in everything, do your best everyday.