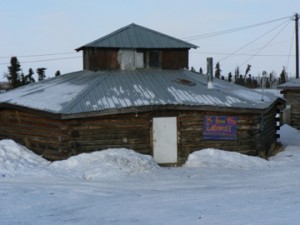 It’s been many miles since the mushers and their teams have come to a populated place. Unlike Ophir and Iditarod, Shageluk is populated with people and not ghosts! Handler didn’t actually visit Shageluk as the 2006 Teacher on the Trail because ’06 was an even year so the teams followed the northern route. It wasn’t Handler that told us about Shageluk, it was our musher! Musher served as a bush doctor in Alaska for four years and one of her villages was Shageluk. Picture this – we’re out on a run and we stopped for lunch. Musher built a fire and fed us. We’re all lined out planning to nap but then while musher was eating, she asked if we’d like to hear about Shageluk. You bet, we can nap later. And so, this is what she told us.

Shageluk (SHAG-a-luck) is a village on the Innoko River. The name Shageluk is an Indian term and means village of the dog people – how cool is that. The area is very scenic with hills and small spruce trees. The Community Center acts as the checkpoint for Iditarod but the teams park by the school. When the race comes through, there are people, dogs, sleds, booties and straw everywhere. Usually the school kids establish a camp out on the trail – sort of a welcome center, complete with brightly colored signs they’ve created to greet the mushers as they pass by. Even though the mushers are tired and very busy taking care of their dogs, they always seem to have just a little extra energy to talk with the kids, sign their autograph books and answer their endless questions. Not only is there a lot of excitement when the Iditarod teams come through the village, there are also many visitors. Friends and relatives come to visit and watch the race. As the village doctor, Musher always arranged her visit to Shageluk so she was there when the race went through. That’s where she met Martin Buser, DeeDee Jonrowe, Susan Butcher and countless other mushers. 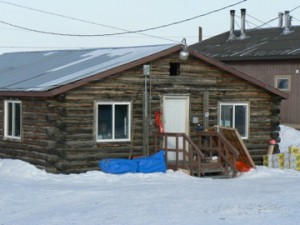 Of the 129 people living in the village, most are Alaska Native Athabascan Indians. Thirty five children attend the K-12 school. Temperatures range between 42 and 80 during the summer and then dip to -62 to zero degrees in the winter. Average precipitation is 67 inches including an average of 110 inches of snow each year! There are no roads into Shageluk. Locals use ATVs, snow machines and dog teams to get around. The Innoko River is used for transportation – boats in the summer and snow machines in the winter. The river is usually frozen from November to May. Small planes come to the village daily as long as weather permits. The small planes don’t have advanced navigational systems therefore visibility has to be a minimum of five miles for the bush planes to fly. This is referred to as the visual flight rule.

People who live in Shageluk rely mostly on subsistence activities for food – they pick berries; grow vegetables; trap beaver; fish for salmon and hunt bear, moose and ducks. There is a nice village store. Before the store opened, people ordered what they couldn’t grow, catch, hunt or make and it was delivered by small plane or boat. Ask a villager what their most important possessions are and the reply will be snow machine, boat, rifle and TV. To keep busy, the kids of Shageluk hunt, fish, watch TV, watch movies, play video games and they LOVE basketball. They travel by plane or snow machine to play games in other villages. The city provides water to the school and the washeteria. Homes have electricity even though they don’t have plumbing. Residents use pit privies and haul water from the washeteria where they also go for laundry and bathing.

While a bush doctor, Musher lived in Bethel. She visited each of her villages two times per year. During the rest of the year, there was a health aide at the clinic to see patients. Everyday via radio medical traffic, the doctor talked with the health aide to discuss the condition of patients seen that day. If anyone was seriously ill, and urgently needed to be seen by a doctor, the patient would be flown to Bethel about 150 miles away. 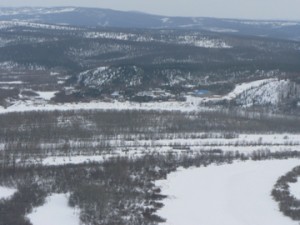 The trail between Iditarod and Shageluk crosses MANY ridges, some steep and some gentle. None of the ridges are really distinctive so to the mushers the trail seems to go on endlessly. There is an old burn area that the teams pass through before crossing two streams, the Little Yentna and Big Yentna. Don Bowers makes a note in his Trail Description that it’s easy to mistake the Little Yetna for the Big Yentna. That’s a bummer to think you’re 20 miles further down the trail than you actually are. Mushers have to take an 8 hour mandatory rest once they reach the Yukon River. Shageluk is the first checkpoint where mushers can take their Yukon River rest. The trail connecting Iditarod and Shageluk was used during the gold rush but not a lot. So when it came time to locate the Iditarod Trail for the race to run the southern route, trail breakers sought the help of Shageluk Elders who had used the trail a half century earlier. Without their experience and knowledge, the historical Iditarod trail could have been lost forever.

Well, there you have it – my musher’s account of life in Shageluk, medical treatment in the bush and a short description of the trail. None of Musher’s pictures were digital so thanks to my friend, Kim Slade the 2007 teacher on the Trail, for sharing her digital images. Next Handler will tell us about Anvik and Grayling. Stay tuned and remember in everything do your best everyday and always have a plan.